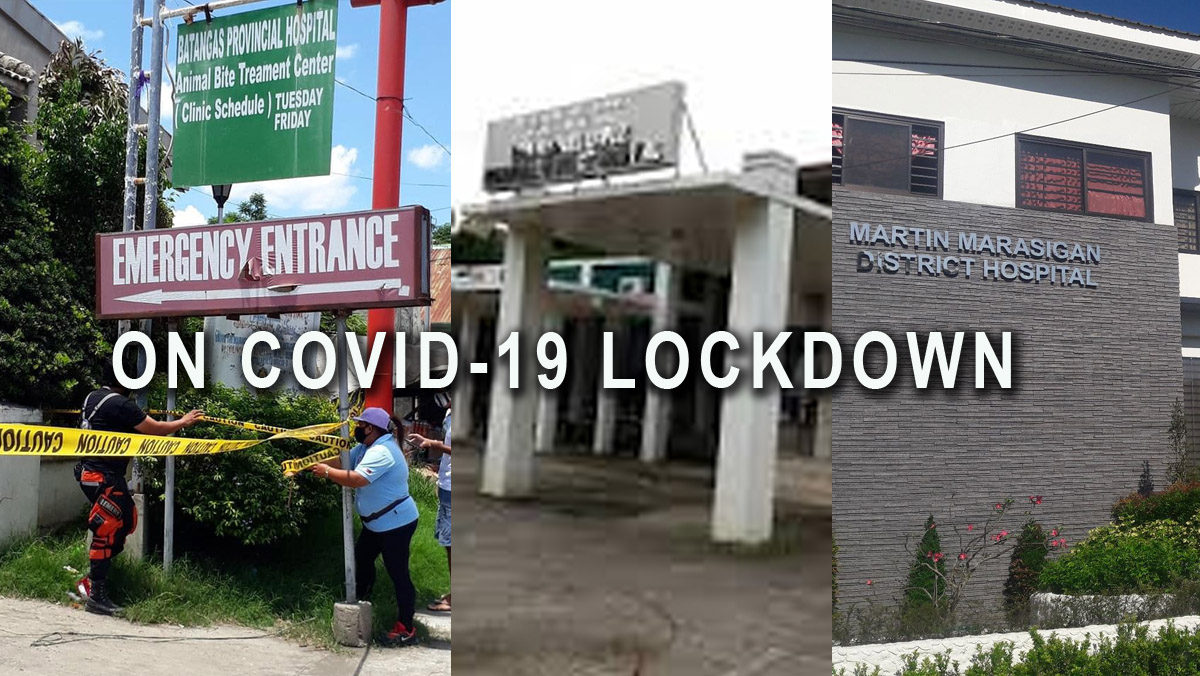 LEMERY, Batangas – AT least three (3) government hospitals in Batangas are now in total lockdown for disinfection purposes as the corona virus pandemic continuously affect the province.

Dr. Rozvilinda Ozaeta, Provincial Health Officer, asked the public’s understanding for the inconvenience that the action to temporarily close down the facilities may bring, as disinfection processes are necessary to make the facilities more responsive to its clientele.

Ozaeta said the Batangas Provincial Hospital in Lemery, formerly Don Juan Mayuga Memorial Hospital, was put on lockdown since Tuesday, June 16, after a medical doctor and a staff nurse were infected of CoVid-19 in the course of their duty as government frontliners. The infection is being attributed to an asymptomatic CoVid-19 positive who sought consulatation at the hospital.

All of the employees and personnel of BPH have undergone swab test and all of them turn negative of the virus.

Also, the Don Manuel Lopez Memorial District Hospital in Balayan town was also put on lockdown for disinfection and sanitation after a patient with pulmonary tuberculosis (PTB) was admitted on Sunday, June 14. Following health protocols, swab samples were taken from the 46-year old female patient who died the following day. The Research Institute for Tropical Medicine (RITM) confirmed the case to be CoVid-19 positive on Tuesday.

An inmate of the Balayan Municipal Jail who was pronounced dead on arrival last June 7 was also reported to have been positive with CoVid-19 when the swab samples taken from him was confirmed by RITM on June 13.

Meanwhile, the Martin Marasigan Memorial District Hospital in Cuenca town was also put on lockdown for three days starting Thursday after one of its staff nurse was confirmed positive with CoVid-19 following the medical check ups of two patients who also turn to be positive with the virus.

All medical workers of the said hospital were also put on swab test as sanitation and disinfection of the facilities proceed. Ozaeta, however, calls on the public not to discriminate the health personnel being affected by the lockdown and assures the resumption of the hospitals’ operation the soonest time possible or as soon as the disinfection is over.

As of 5:00 in the afternoon of June 18, Thursday, there are 252 confirmed CoVid-19 cases in the province of Batangas, with the data gathered from Provincial Deparment of Health Office in Batangas, and the various local government units (LGUs) of the province.| – BALIKAS News Network