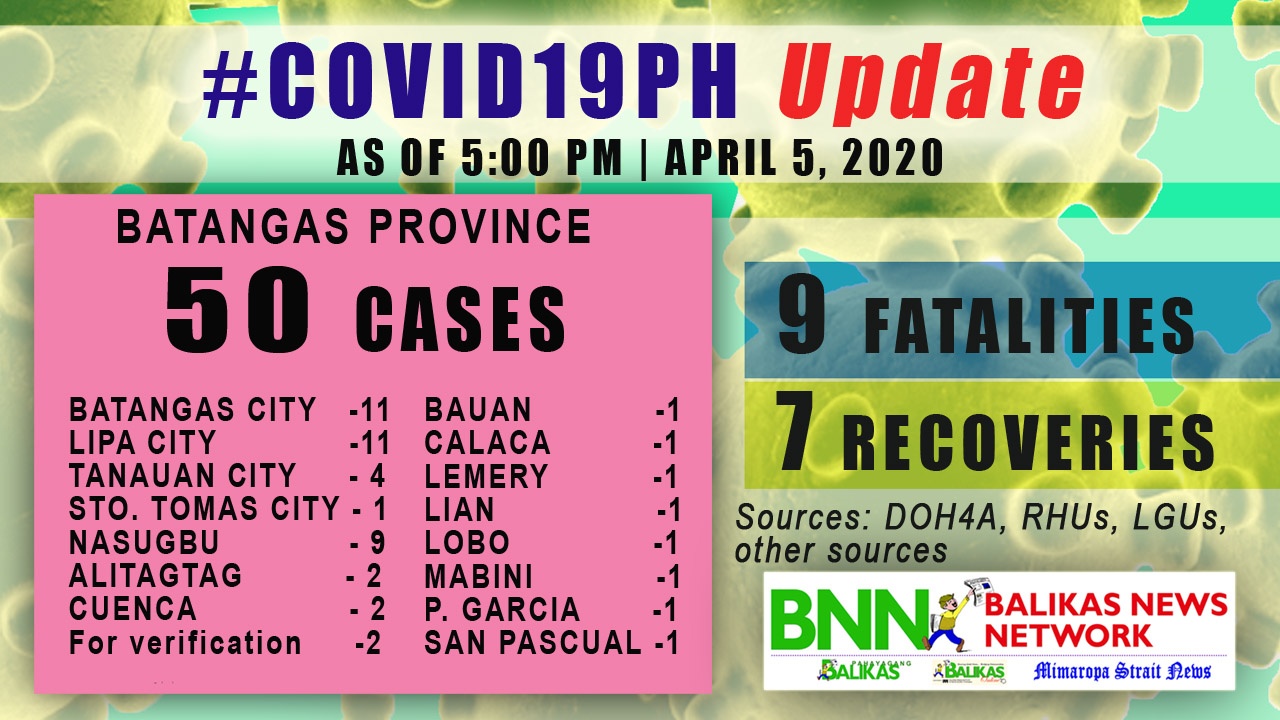 BARELY 26 days since the first of corona virus 2019 (COVID-19) case was confirmed and recorded in Batangas, the number of patients in the province has continuously increasing until it sealed a record 50 cases as of the latest report of the authorities over the weekend.

As of 4:00 o’clock in the afternoon, April 5, Sunday, the Center for Health Develepment (CHD) Calabazron – Provincial DOH Office in Batangas, reported that of the 50 cases, only 16 patient remain admitted in different health facilities in the province and in Metro Manila, while 15 are under home quarantine seven.

Meanwhile, of the 50 recorded cases of CHD-DOH-Batangas, still, the provincial capital, Batangas City, remains having the highest number with ten (10) cases, followed by Lipa City and Nasugbu town with nine (9) cases each, while Tanauan City remains having four (4). Both Alitagtag and Cuenca have two (2) cases each, while there are lone cases each in Lemery, Calaca, Lian, Lobo, Mabini, Padre Garcia and San Pascual. Bauan is the latest LGU to have recorded a covid-positive case. The report also states that LGUs to which the five (5) more cases to be verified belong is yet to be identified.

On the other note, as of this writing, both Batangas City and Lipa City has 11 cases each already.

Both mortality and recovering patients accounted for 14% (7 cases) each of the total number of cases recorded in the province; while the remaining five (5) cases are yet to tbe verified.

Among those who recovered, Nasugbu’s 2nd patient, Ariane Tee Khey who is now also on home quarantine is most celebrated among the recorded recoveries in the province. Khey has shared publicly her ‘journey’ of battling with COVID-19 and pleads for public understanding and the public’s submission to government policies under the ECQ.

Earlier on, the City Health Office of Batangas City reported that PH49, the first COVID-19 patient recorded in the whole province who also hails from Batangas City is now fully recovered, and has successfully completed the mandatory post-confinement quarantine. The CHD-DOH-Batangas also noted that another Batangas City patient has recovered.

PH95, the province’s 3rd case and Lemery’s first case who has been discharged from the hospital on March 24 is continuously observing her mandatory post-confinement home quarantine until full recovery.

“Sending our take-home love and care to our patient. Likewise, sending our thanks and sincere congratulations to our DMMC medical team and support staff. To God be the glory!”, the hospital’s advisory read.

Another patient [TC-2], has also recorded negative result and is declared recovered.

Last on the list of recoveries is the lone patient of Lobo town, making the Atis capital of Batangas, COVID-19 Free again.

The CHD-DOH-Batangas report noted two (2) patients to have died of dreadful coronavirus in Lipa City – LC-4 and LC-8. On Saturday, Lipa City mayor Eric Africa reported the 10th case in the city to have died also and cremated. These three (3) cases were only confirmed CoVid-19 positive after the death of the patients.

Meanwhile, family members of LC-3 has also confirmed days ago that their matriarch, the mother of singer Joey Bautista has died also. The late singer also died of COVID-19 on March 19, though he was only confirmed to be COVID-positive after his death. This brings to four (4) the total number of fatalities in Lipa City.

In Batangas City, the local government is grieving for the loss of City Councilor Julian Pedro “Nitoy” Pastor also died of corona virus, Saturday night. Words of endearment flooded the social media for the early demise of a city councilor who was able to attend the last session of the city council when a supplemental budget was passed for the city’s relief program. It can be recalled that the city’s 2nd covid case, also the 2nd in the province died on March 20.

On the other hand, Alitagtag, Cuenca and Nasugbu towns has one fatality each.

As of this writing, there are 510 persons under investigation (PUIs) and 12,260 persons under monitoring (PUMs) in the province. While there is a considerable increase in the number of confirmed cases over the weeklong period, the number of PUMs who are under home quarantine has remarkably decreases to only 1,980 last Sunday compared to  2,672 patients three (3) days back, while those who have completed 14 days of home quarantine has notably increased from 9,200 to 10,280 patients.

With the escalating number of cases each day, the local government units concerned keep on reminding their constituents to seriously follow the instructions of the Inter-Agency Task Force (IATF) to remain in their respective houses and observe social distancing as the declaration of Enhanced Community Quarantine is not yet over.| – BALIKAS News Network.