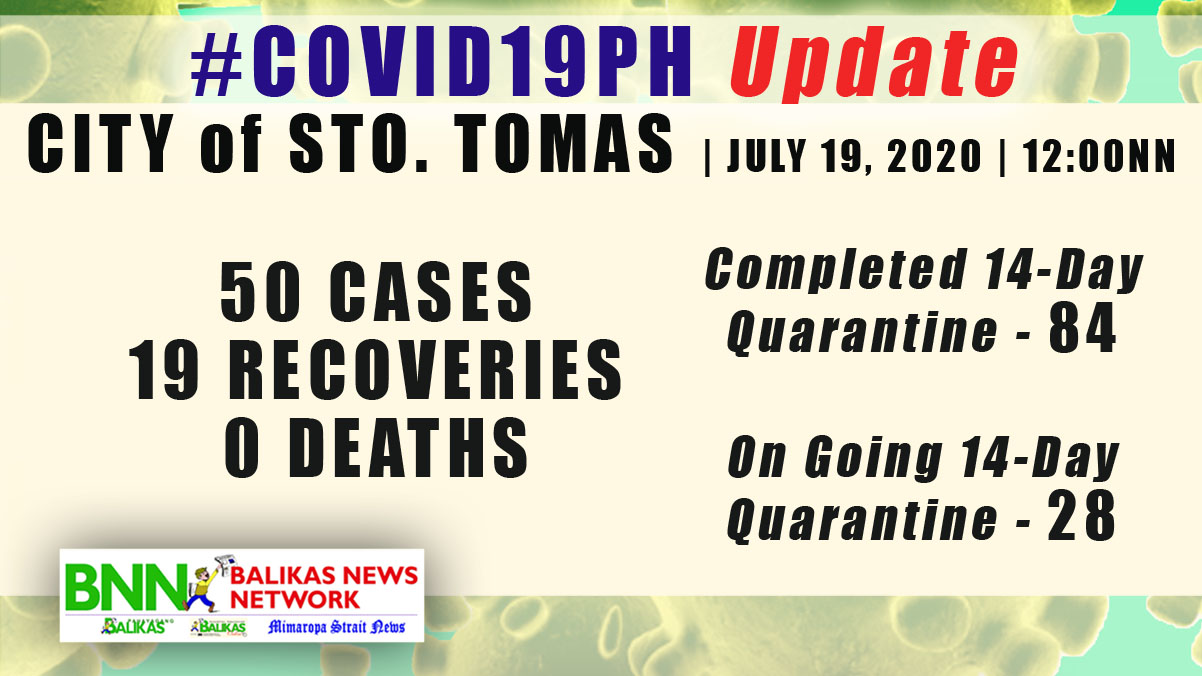 CITY OF STO. TOMAS, Batangas – AT least eight Chinese nationals including a 29 year old lady who are into construction industry were among the reported to be confirmed positive corona virus patients here, the City Epidemiology Surveilance Unit (CESU) reported recently.

Based on the CESU report, the virus could have been contacted first by the first two (2) officers of the undisclosed construction firm who arrived in the country from China on June 26, 2020. Investigation disclosed that upon arrival to the country, the duo, aged 40 and 32, were subjected to RT-PCR Test of the Philippine Red Cross. While their swab tests have negative results, they were also subjected to mandatory 14-day quarantine in Manila.

On July 9, their 14th day in the country since their arrival, with the onset of mild symptoms when they arrived in the City of Sto. Tomas, they were again subjected to swab tests when they sought admission in a private hospital. The results released on July 11 turn to be positive.

Contact tracing done of the City Health Office resulted to identifying a Chinese lady worker in the same construction company. With the onset of mild symptoms, her swam samples taken on July 10 released a positive result also on July 15. But before the result on the Chinese lady’s test was released, another contact tracing was made on the group of Chinese workers in the same company and they were subjected to swab test on July 13. And on July 16, all the five (5) Chinese including the engineer and general manager were confirmed to be infected also of the virus.

While the last five Chinese were all asymptomatic, the Tomasinos are getting weary of the possible surge of CoVid-19 cases in their city, particularly in the construction sites and industrial parks as more establishments are allowed to resume operation, now that the City of Sto. Tomas is already placed under the modified general community quarantine (MGCQ).

The City of Sto. Tomas is located at the northeastern side of the province and serve as gateway of Batangas to the provinces of Laguna and Quezon.

As of July 19, 2020, the City of Sto. Tomas has a total of 50 confirmed cases; 31 of which are active while 19 has already recovered. The city remains having a zero covid mortality rate.|-BALIKAS News Network