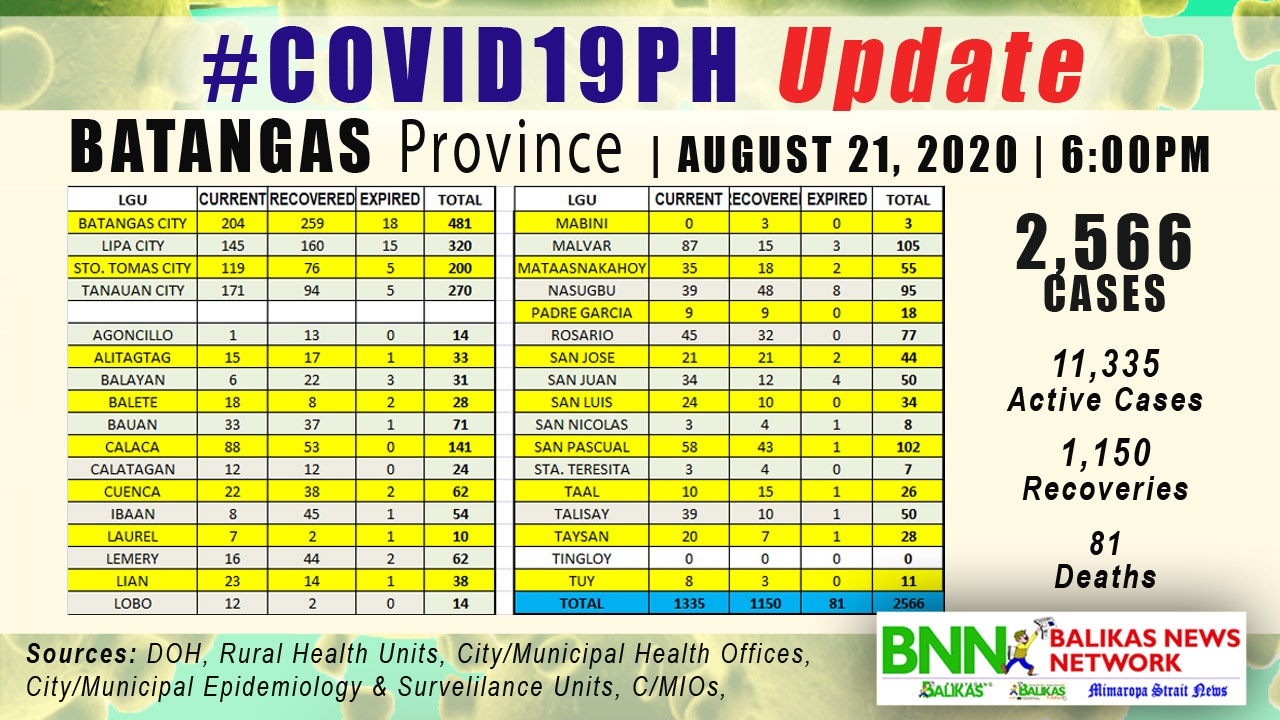 THE Batangueño communities, particularly the netizens, keep on calling the local authorities to report the real situation of the contagion in the province.

In some posts of different local government units, government agencies and the media, as well as the comments of the public, differences in reporting styles, observers noted, do not give the real picture of how widespread is the corona virus in the province of Batangas.

Common clamor of the public is the very much delayed reporting of cases, particularly on the recovery and mortality rates. Netizens can’t stop comparing the reports of their respective towns or cities and that supposed to be an Official DOH Report for Batangas Province being reported daily thru Facebook by the Provincial Information Office.

“CoVid-19s patient are deemed positive at the time that the swab specimen were collected from and not at the time that their tests were confirmed. While we cannot immediately gather the data on the dates that the specimen were collected, we are relying on the reports of the RITM or other accredited testing laboratories after such data were confirmed by our epidemiologists,” Usec. Rosario Vergeire once explained during the regular virtual press briefer of the Department of Health (DoH).

Confirmed results of RT-PCR tests, the gold standard test on CoVid-19, are being forwarded to the Regional Epidemiology and Surveillance Units (RESUs) which disseminates to the LGU concerned. But based on the experiences of the LGUs, such layers of transmission of reports end up with too much delay in releasing the same to the public. This is the same reason why the concerned cities and municipalities instead of waiting for the report of the RESU, are releasing the reports to different platform available for the information of their constituents once they received the result (and validated the same) from the RITM or from other testing laboratories.

The average waiting period for a RT-PCR test result is about 48 hours. Sometimes, it took 72 hours or 3 days to be released; although there are even cases that results were only con-firmed on the fourth day or even after a week.

In the province of Batangas, Provincial Department of Health Office (PDOHO) thru the PIO only reports the data they received from RESU-Calabarzon until 3:00 o’clock in the afternoon. Such data that passed through several layers of transmission and have earlier cut-off obviously do not reflect the real or call it near-real situation of the contagion in the province.

For example, when the province was reverted to the general commu-nity quarantine (GCQ) status on August 1, 2020, the PDOHO/PIO data reported 1,118 confirmed cases, while an independent monitoring of BALIKAS News reflected 1,166 cases. On August 16, when the IATF extends GCQ in Batangas, the PDOHO/PIO Report said there are 1,809 confirmed cases in the province, but the BNN Covid Monitor said there are 2,017 confirmed cases already. The BNN CoVid-19 Monitor reflects the reports of the four (4) component cities and 30 municipalities of Batangas as of 6:00 o’clock p.m. daily. It is a tedious process to collect the data, but with the government resources and logistics, there might be no reason for the PDOHO not to come up with a more updated report.

Reliable and updated reports on confirmed cases is one of the basis of different actions and programs relative in order to prevent and or control the continuing transmission of the virus.

Would the PDOHO or the provincial inter-agency task force on emerging infectious diseases consider revisiting their data management and reporting process? Are these numbers meaningless?|-BNN