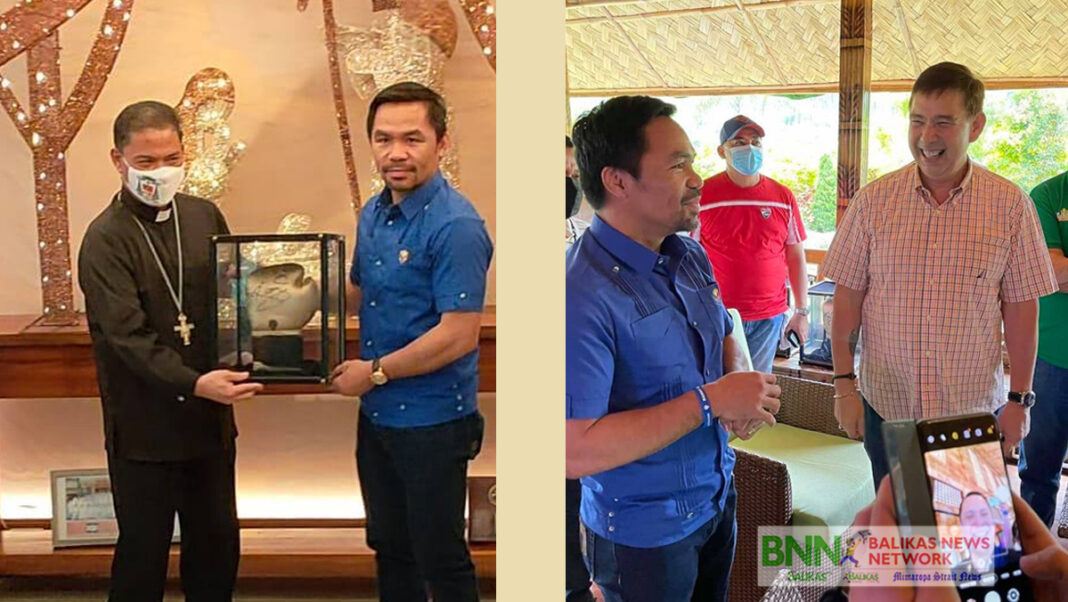 LIPA City — ON his way to the town of Balayan in western Batangas to distribute relief and financial aids to victims of calamities and disasters, Senator Manny Pacquiao first visited the public market here and maked a courtesy call to Batangas religious and politica leaders.

From the public market, the “Pambansang Kamao” sampled the famous Loming Batangas before paying a courtesy call to Lipa City Mayor Eric Africa at the city hall.

Although Mayor Africa belonged to the Nacionalista Party, he was gracious enough to receive Pacquiao and exchange notes on how they could best serve the people of Batangas.

Senator Pacquiao then visited his colleague in the senate, Senate Pro Tempore President Ralph G. Recto in his residence and had a private meeting with the One Batangas leader.

Capping his visit to Lipa is a luncheon meeting with Lipa Archbishop Gilbert Garcera at the Archbishop’s Palace where Pacquiao also sought spiritual guidance.

Pacquiao had adopted a Christian faith but stressed that his reverence and respect for the Roman Catholic and all other religions is undiminished.

“I spent most of my adult life as a Roman Catholic, I grew up surrounded by my Muslim friends and have worked together in many humanitarian projects with the Iglesia ni Cristo. We all pray for the same God and we all wish for a better Philippines. Religion should not divide us, it should unite us,” Pacquiao said.

Senator Pacquiao is an adopted son of the province of Batangas by virtue of a Resolution No. N-081, Year 2019, acknowleging his achievements of being world’s eight-division champion in the history of boxing thereby bringing pride and recognition to the country.

“…his faith and dedication and commitment to serve the Filipino people is unquestionable and a kin to the traits of the Batangueños,” part of the Resolution read.| – BNN