Batangas City toss with Taal as most competitive LGUs 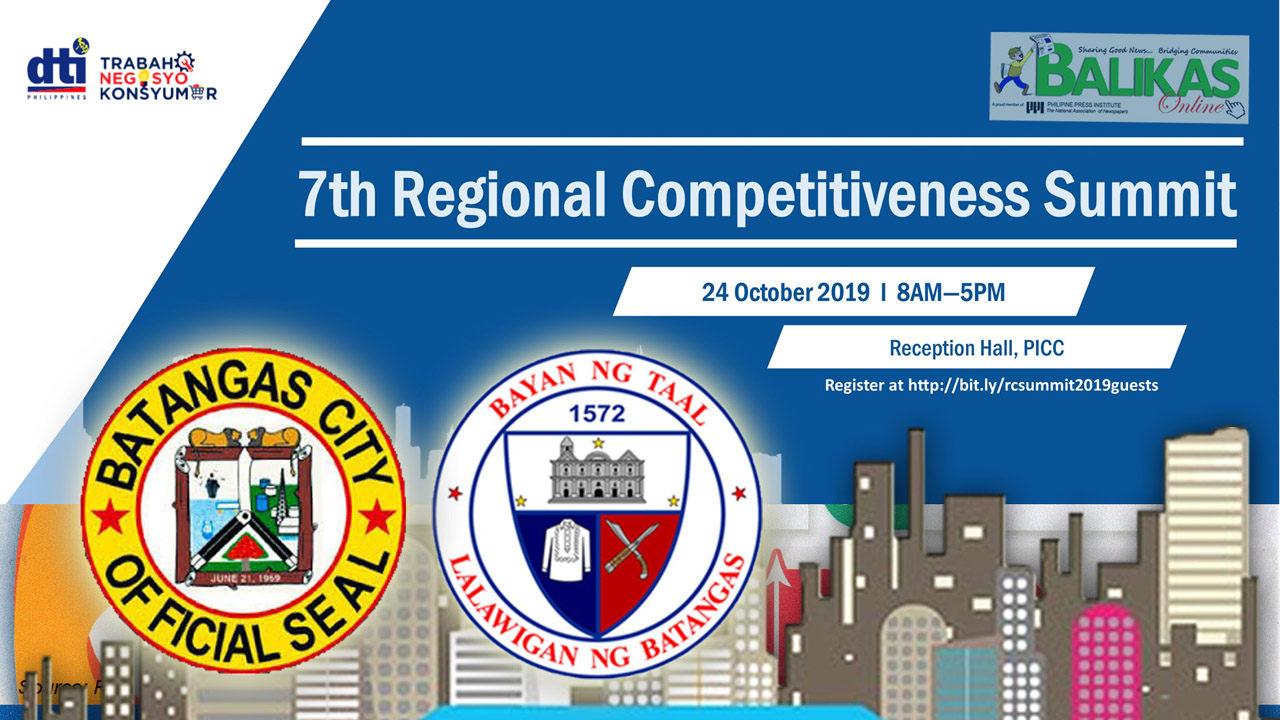 BATANGAS City tossed with the town of Taal in this year’s competitive index, according to the DTI, heralding the pride of the Batangueños being the only two LGUs among the four (4) cities and 30 municipalities comprising Batangas province to have received the award.

Interestingly, Batangas City completes the Top 3 among component cities to be hailed as the most economically dynamic LGUs in the whole country with the City of General Trias in Cavite being the front runner and the City of Calamba in Laguna being second.

From among the country’s 1,518 cities and municipalities ranked this year, Batangas City proved to be the most economically dynamic city for 2019 having leaped seven times from last years ranking. From Rank 10 in 2018, it jumped to Rank 3 while Gen Trias moved five times from No. 6 to No. 1; Calamba moved twice from No. 4 in 2018 to No. 2 in 2019.

Even mixing with all the cities in the country, Batangas City even surpassed all the Top 10 Most Competitive Highly Urbanized Cities (HUCs) in 2018 in the field of economic dynamism. This year in this category, Pasay City just moved from 2nd to 1st, Davao City improved from third place to 2nd place, while last year’s no. 1 Quezon City dropped to 3rd place.

It is also worth noting that the country’s Top 3 economically dynamic component cities this year are all from the Calabarzon region. This simply translates why the Calabarzon remains the biggest contributor to the gross domestic product (GDP) among the regions outside Metro Manila. The region posted 17% contribution, next to Metro Manila’s 36%.

The Economic Dynamism Pillar of CMCI measures the economic activity and productivity of an LGU, which include the size and growth of the local economy (business registrations, capital, revenue, permits), capacity to generate jobs, cost of living, cost of business, etc.

Meanwhile, Batangas City was also awarded as the country’s No. 6 in Resiliency, No. 12 in Government Efficiency and No. 9 in Over-All Competitiveness Ranking – all in component cities category.

These developments simply put that the tandem of Mayor Beverly Rose A. Dimacuha and Batangas City Lone District Congressman Marvey Mariño are the timely formidable leaders that the city electorate has rightfully chosen in 2016. Being reelected unchallenged in 2019 will only pave the way for them to continue the momentum of developments in the city.

On the other hand, the heritage town of Taal got the second spot as 2019 Most Competitive Municipality in the Government Efficiency Pillar among the 3rd to 6th class municipalities.

Local leaders may have worked not just double time to prove their efficiency as government workers and in the delivery of their services to its continutents that made the LGU leaped from 58th place in government efficiency in 2018 to second place this year.

In the Government Efficiency Pillar, competitiveness of LGUs is determined through the reliability and quality of government support for effective and sustainable expansion, and absence of corruption.

The ranking assessment was done during the incumbency Mayor Fulgencio Pong Mercado, first elected in 2016, and the rest of his team that Taaleños reelected in the recent local election.

However, the City of Tanauan which was hailed as the country’s most resilient component city in 2018 that put it into the rank 20 of the Most Competitive Cities in 2018 did not make it this year.

So also the City of Sto. Tomas, which ranked No. 3 in economic dynamism in 2018 did not make it in any categories this year. The town was formally converted into a component city last September 7, 2019.

“I am glad to hear that more and more Local Government Units (LGUs) are seeing the importance of the CMCI project,” said DTI Secretary Ramon Lopez.

“The CMCI now has 1,518 cities and municipalities, from 122 cities and 163 municipalities in its pilot run in 2013. Beyond being an annual ranking event, it is a vital opportunity for policymakers and public officials to see where things are, compare it to past performance, and relate it to the experience of other localities. As such, the program serves as a driving force to do better, to be more innovative, and to utilize and manage resources more effectively,” he added.|- BALIKAS News Network