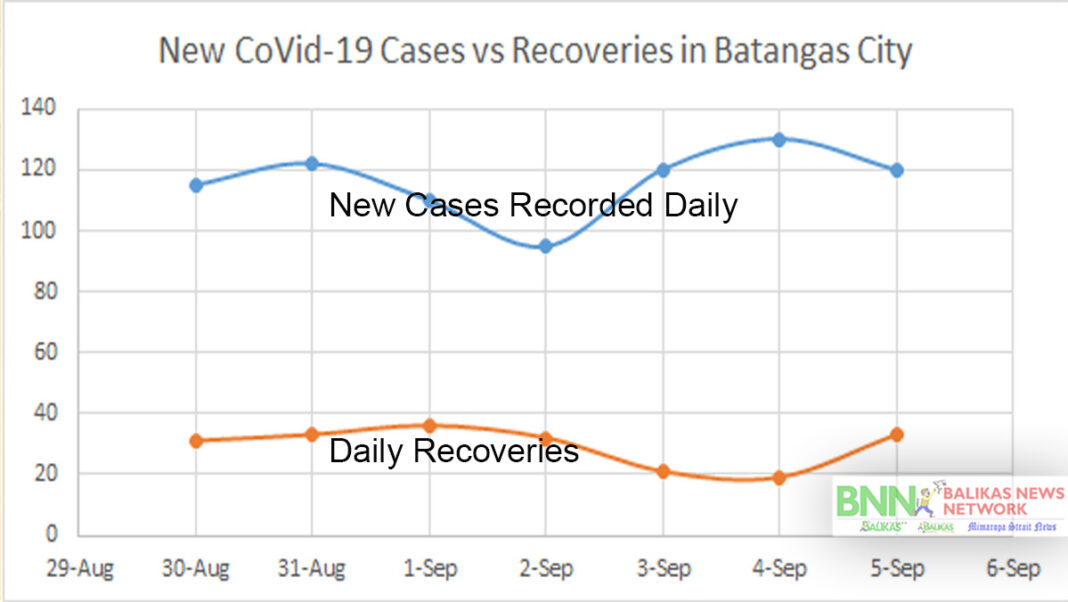 BATANGAS City – WITH more people getting vaccinated, still, the corona virus finds its way to infect individuals and spread in different communities in this provincial capital where the active cases of CoVid-19 hit 1,127 mark as of 5:00 p.m., Sunday, September 5.

Based on the daily report of the City Epidemiology and Surveillance Unit (CESU) of the City Health Office (CHO), there are 812 new cases recorded in the recent week (August 30-Sept. 5), or an average of 116 new cases daily. These number brought to 863.57 the average daily active cases in the city during the entire week.

On the other hand, there were only 205 patients who have recovered during the week, or an average of 29.28 recoveries daily.

Batangas City is still under General Community Quarantine (GCQ) with hightened restrictions. The local government here keeps on asking the citizen’s adherence to strict observance of minimum health standards, and follow the restrictions mandated by the Inter-Agency Task Force (IATF).

To counter the dramatic surge of cases, the city will launch a new contract tracing app this week that is exclusively customized for the city use.

Aside from the city residents, all those individuals visiting or have transactions in different business establishments, private at government offices in the city are encouraged to download the Batangas City Trace and log-in at the mobile app using a smart phone.

Aguillera, however, assured the public that all information given tot eh app will be treated confidential and only the City Epidemiological Surveillance Unit (CESU) will have access to it.|-BNN