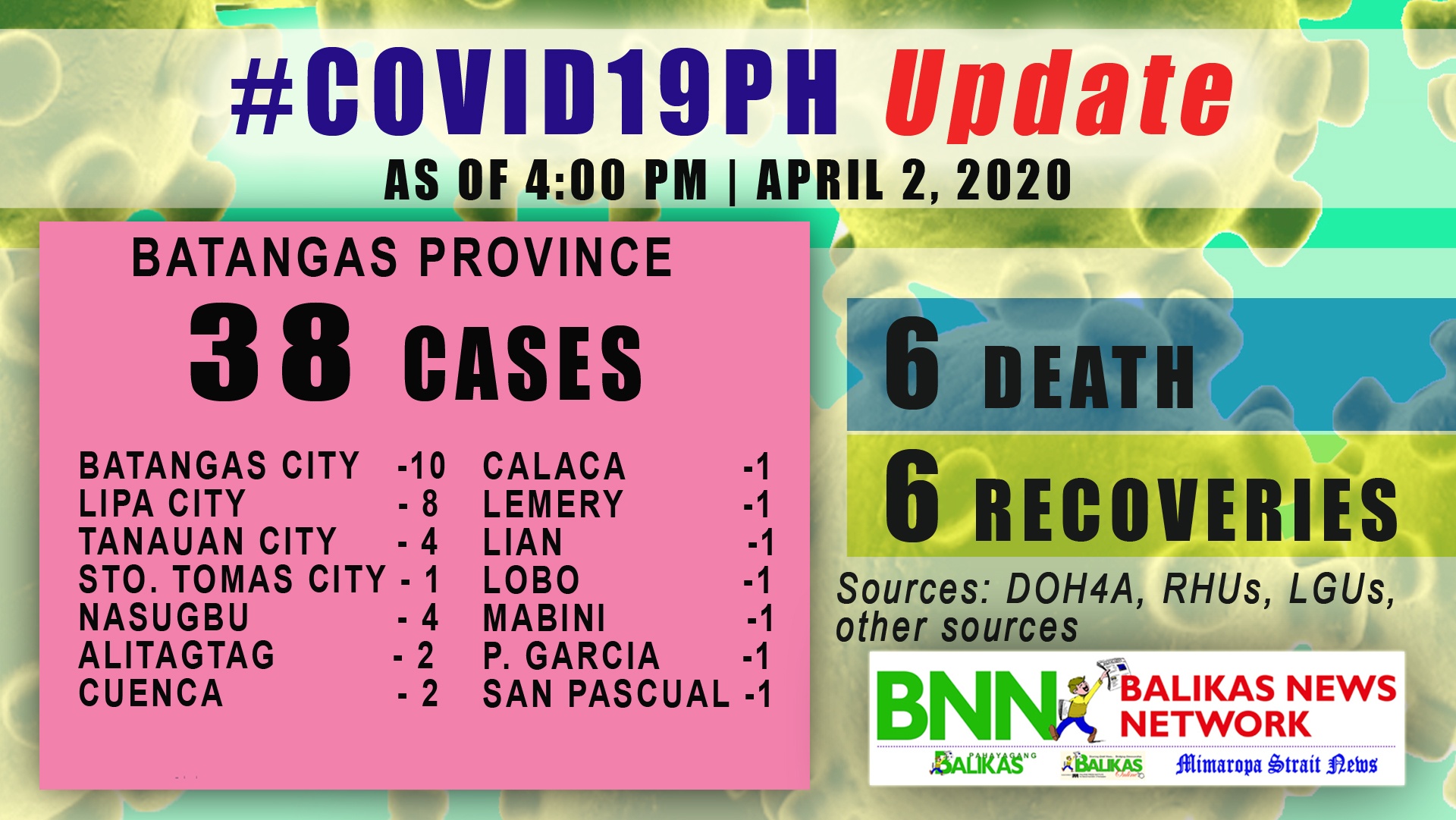 PATIENTS confirmed positive of corona virus 2019 (COVID-19) in the whole Batangas province continuously increase as it hit 38 record as of 12:00 Wednesday night.

As of 4:00 o’clock in the afternoon, April 2, cut-off of the Center for Health Develepment (CHD) Calabazron – Provincial DOH Office in Batangas, at least 38 cases were recorded, 17 of which are still admitted in different health facilities in the province and in Metro Manila, seven (9) are in strict home quarantine, five (5) died, six (6) recovered, while the remaining four (1) are yet to tbe verified.

Of the 38 recorded cases of CHD-DOH-Batangas, Batangas City has the highest number with ten (10) cases, Lipa City followed with eight (8), then both Tanauan City and Nasugbu have four (4) each, both Alitagtag and Cuenca have two (2) cases each, while there are lone cases each in Lemery, Calaca, Lian, Lobo, Mabini, Padre Garcia and San Pascual.

The CHD-DOH-Batangas report said that at least six (6) patients have fully recovered while five (5) patients died of the virus.

The City Health Office of Batangas City reported that PH49, the first COVID-19 patient recorded in the whole province who also hails from Batangas City is now fully recovered, and has successfully completed the mandatory post-confinement quarantine.

PH95, the province’s 3rd case and Lemery’s first case who has been discharged from the hospital on March 24 is continuously observing her mandatory post-confinement home quarantine until full recovery, same with Nasugbu’s 2nd patient, Ariane Tee Khey who is now also on home quarantine. Khey has shared publicly her ‘journey’ of battling with COVID-19 and pleads for public understanding and the public’s submission to government policies under the ECQ.

Meanwhile, of the five (5) reported deaths, Batangas City’s 2nd case, also the 2nd in the province is the lone fatality of the city capital’s 10 cases. Lipa City has accounted two fatalities in the list – LC-4 and LC-8. While the other two fatalities are from Alitagtag and Cuenca towns.

Meanwhile, family members of LC-3 has already confirmed days ago that their matriarch, the mother of singer Joey Bautista has died also. The late singer also died of COVID-19 on March 19, though he was only confirmed to be COVID-positive after his death.

As the number of cases keep on increasing day-by-day, the local government units concerned keep on reminding their constituents to seriously follow the instruction of the Inter-Agency Task Force (IATF) to remain in their respective houses and observe social distancing as the declaration of Enhanced Community Quarantine is not yet over.

As of this writing, there are 345 persons under investigation (PUIs) and 11,872 persons under monitoring (PUMs) in the province [2,672 are under home quarantine while 9,200 has completed 14 days quarantine].| – BALIKAS News Network.