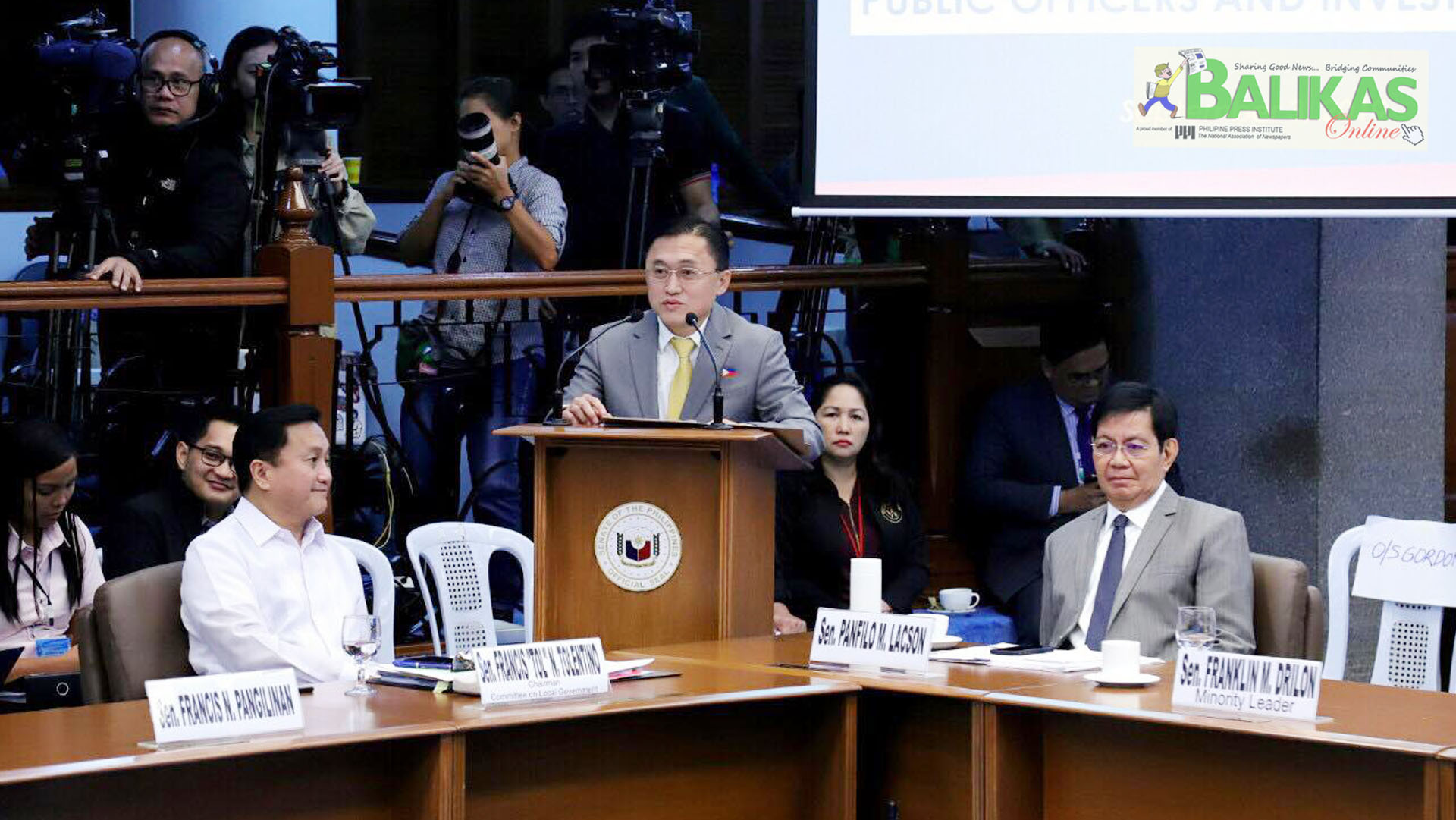 SENATOR BONG GO joined the Senate inquiry recently to investigate the controversial issue on the questionable release of about 200 prisoners convicted of heinous crimes through the imposition of Good Conduct Time Allowance (GCTA) ruling of the Department of Justice.

Then BuCor chief Nicanor Faeldon was also ordered, but was unable to attend the public hearing on September 2, to answer allegations that he violated some provisions of the Good Conduct Time Allowance (GCTA) Law in releasing some convicts.
The senators want Faeldon to explain his decision to release former Calauan, Laguna mayor Antonio Sanchez, who was sentenced to seven life terms for the rape-slay of University of the Philippines Los Baños student Eileen Sarmenta in 1993 and the killing of her boyfriend Allan Gomez.

With the absence of Faeldon, Senator Bong Go, instead, directed his questions to Justice secretary Menardo Guevarra: “You stated yesterday that there is a joint committee formed to address the issues surrounding GCTA, the Filipino people deserves to know the proposed remedies regarding the release of convicted felons through GCTA. What are your proposed remedies? Will they be rearrested? How will you implement the re-arrest?

Justice Guevarra replied that on the matter of the amendment of the Implementing Rules and Regulations as well as the guidelines being followed by the BuCor and also BJMP with respect to the computation and appreciation of GCTA, and other benefits like special time allowance for loyalty, etcetera, the joint committee has already been constituted.

“We have issued appropriate joint department order and the joint committee, I supposed is on the third day of work. We have given them a time frame of 10 working days within which to complete their review of the existing IRR and guidelines and to submit the same to the Secretary’s concern, that means myself, and to Secretary Año of DILG for approval. Now, as soon as we completed this process of revising of the IRR to specifically include explicit and concrete statement that these benefits will not apply among others to people or PDLs convicted of heinous crimes, then we shall act accordingly in relation to those guidelines of IRR once they have already been in placed,” Guevarra stated.

He told Senator Bong Go that the DOJ already have a plan of action. “We just want to make to do first things first. We have a plan of action to put in place, first, the revised IRR, the revised guidelines, so that we have already have a legal basis as well. Of course we are very much aware of the existing jurisprudence of the matter and we are bent on considering that favorably about the case of People vs Tan as correctly cited by Senator Drilon yesterday and we are taking that jurisprudential rule into very serious considerations so we are taking action on your question, Mr. Senator. It’s just that we want to finish revision of the implementing rules and regulations.”

In return to Guevarra’s explanation, Senator Bong Go, stressed that the Filipino people want answers and solutions, not endless debates and more questions.

“The law may be ambiguous, but what is clear to me is that there is either negligence or corruption in the way our correctional system is being handled. I say to the Filipino people – mananagot ang dapat managot,” Sen. Bong Go added.

“Yesterday, Sec. Guevarra pointed out what is lacking in the law. Today, I have solutions. I have filed Senate Bill No. 1003 to clearly state the intent and policy of the law not to extend the benefits of GCTA to prisoners who are convicted of heinous crimes. In this bill, I added a provision that will very clearly state that persons who have been convicted of heinous crimes will not be eligible to be granted time allowances. To serve as a guide, I added a provision that lists heinous crimes,” Go stated.

He also said that to eliminate corruption, he added a provision stating that any release of prisoners on the basis of time allowances shall be subject to review. “The Congress will also know what is happening with the releases, as the Bureau of Corrections will be required to furnish the Legislature with a report twice a year. All of these will form part of our continuing fight against corruption and criminality, and illegal drugs,” Go said.|Joenald Medina Rayos