CALABARZON, 3 other regions placed under state of calamity 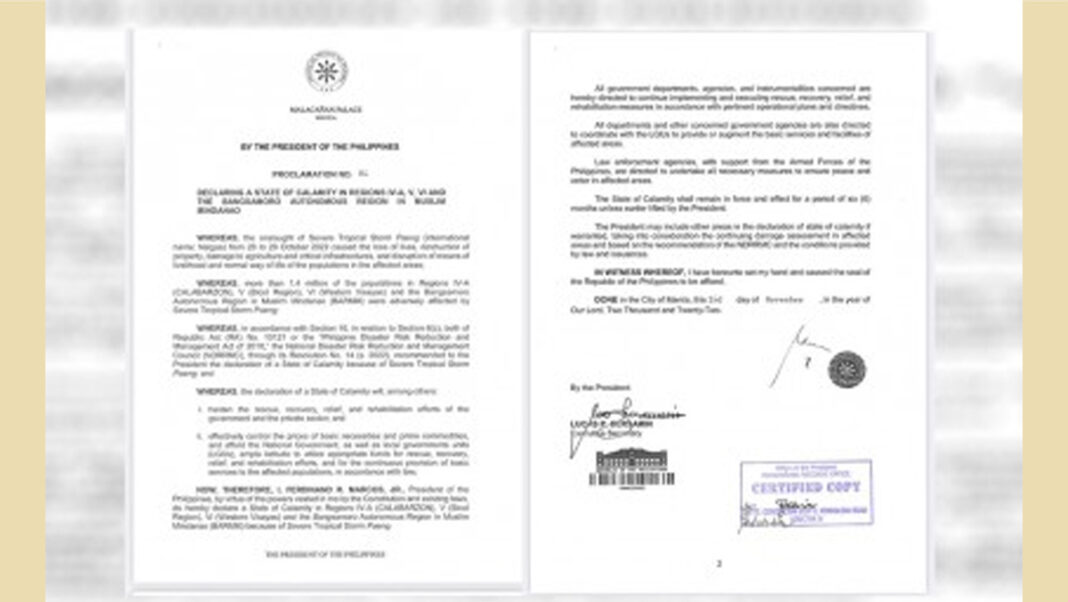 PRESIDENT Ferdinand R. Marcos Jr. has signed a proclamation placing the regions of Calabarzon, Bicol, and Western Visayas, as well as the Bangsamoro Autonomous Region in Muslim Mindanao (BARMM) under a state of calamity for six months.

Marcos on Wednesday inked Proclamation 84, placing the four regions under a state of calamity in the aftermath of the former Severe Tropical Storm Paeng.

Under the proclamation, the state of calamity shall remain in force and effect for six months, “unless earlier lifted by the President.”

He heeded the recommendation of the National Disaster Risk Reduction and Manage-ment Council (NDRRMC) to declare a state of calamity after Paeng “caused the loss of lives, destruction of property, damage to agriculture and critical infrastructures, and disruption of means of livelihood and normal way of life of the populations in the affected areas.”

“More than 1.4 million of the populations in Regions 4-A (Calabarzon), 5 (Bicol Region), 6 (Western Visayas) and the Bangsamoro Autonomous Region in Muslim Mindanao (BARMM) were adversely affected by Severe Tropical Storm Paeng,” Marcos said in the proclamation.

“Now, therefore, I, Ferdi-nand R. Marcos Jr., President of the Philippines, by virtue of the powers vested in me by the Constitution and existing laws, do hereby declare a State of Calamity in Regions 4-A (Calabarzon), 5 (Bicol Region), 6 (Western Visayas) and the Bang-samoro Autonomous Region in Muslim Mindanao (BARMM) because of Severe Tropical Storm Paeng.”

According to Proclamation 84, the declaration of a state of calamity would enable the government, as well as the private sector, to “hasten the rescue, recovery, relief, and rehabilitation efforts.”

Placing the affected regions under a state of calamity will also help “effectively control” the prices of basic necessities and prime commodities, it read.

Under the proclamation, the national government and the local government units (LGUs) would be given “ample latitude” to use appropriate funds for rescue, recovery, relief, and rehabilitation efforts.

Proclamation 84 will also ensure the “continuous” provision of basic services to the affected populations, based on the law.

“All government departments, agencies, and instrumentalities concerned are hereby directed to continue implementing and executing rescue, recovery, relief, and rehabilitation measures in accordance with pertinent operational plans and directives,” the proclamation stated.

“All departments and other concerned government agencies are also directed to coordinate with the LGUs to provide or augment the basic services and facilities of affected areas. Law enforcement agencies, with support from the Armed Forces of the Philippines, are directed to undertake all necessary measures to ensure peace and order in affected areas.”

The proclamation allows the President to include other areas in the declaration of a state of calamity “if warranted,” taking into consideration the continuing damage assessment in affected areas and based on the recommendation of the NDRRMC and the conditions provided by law and issuances.

A copy of the proclamation was uploaded on the official website of the Official Gazette.

Meanwhile, taking cognizance of the tremendous impact of the tropical storm Paeng and the disaster it brought to their areas of concern, some local government units have already declared state of calamity in their localities prior to the issuance of Proclamation 84.|- BALIKAS News Team/pna/ragc