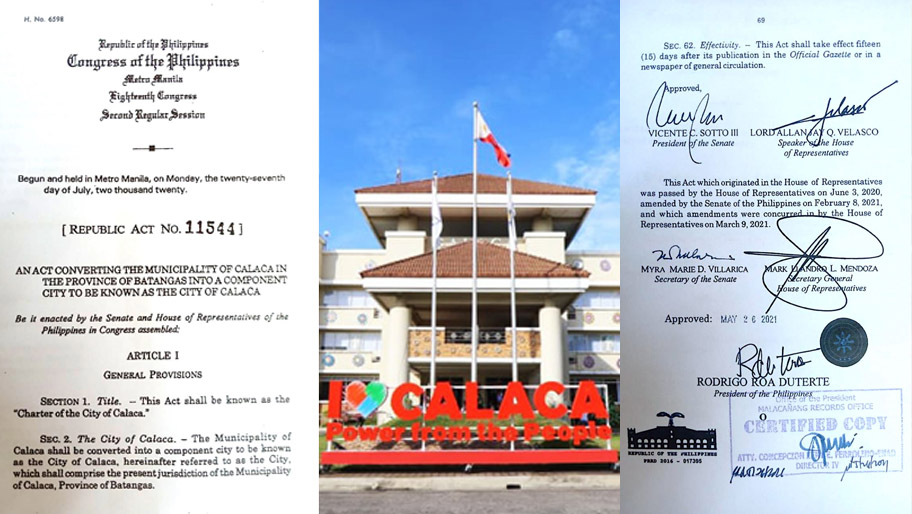 The people of Calaca town in Batangas were very jubilant that even at the time of pandemic, their long-awaited charter for their cityhood was finally signed into law by President Rodrigo Roa Duterte, Wednesday night.

The local chief executive said that the Senate leadership confirmed that the signed copy of the enabling law was transmitted to the Congress’ upper house.

“We are also indebted to all who made this possible for us to reach our cityhood which we dreamt for so long. We have only one step left for its finality, the plebiscite and we are hoping that every Calaqueño will stand up to support our cause for cityhood.” Ona added.

The law provides that the newly city will have its corporate existence as the fifth component city of the province Batangas after the majority of its qualified voters have ratified it on a plebiscite which much be held within ninety (90) days from the approval of the charter on until August 24, 2021.

RA 11544 originated at the House of the Representatives with the House Bill No. 5077 introduced by Congresswoman Eileen E. Buhain of the First District of Batangas which was passed by the lower house on June 3, 2020, at the middle of the first year of corona virus pandemic. The Senate amended and passed the enabling Senate Bill No. 1825 authored by Senator Francis Tolentino on February 3, 2021, which amendment was concurred by the lower house on March 9, 2021.

The Official Gazette published the law on May 27, 2021. Calaca would be the second town of Batangas to be converted into a component city of the province during the Duterte administration, after the president signed into law RA 11086 converting the municipality of Sto. Tomas into a component city to be known as City of Sto. Tomas, also the first city created in the country under the present administration.|