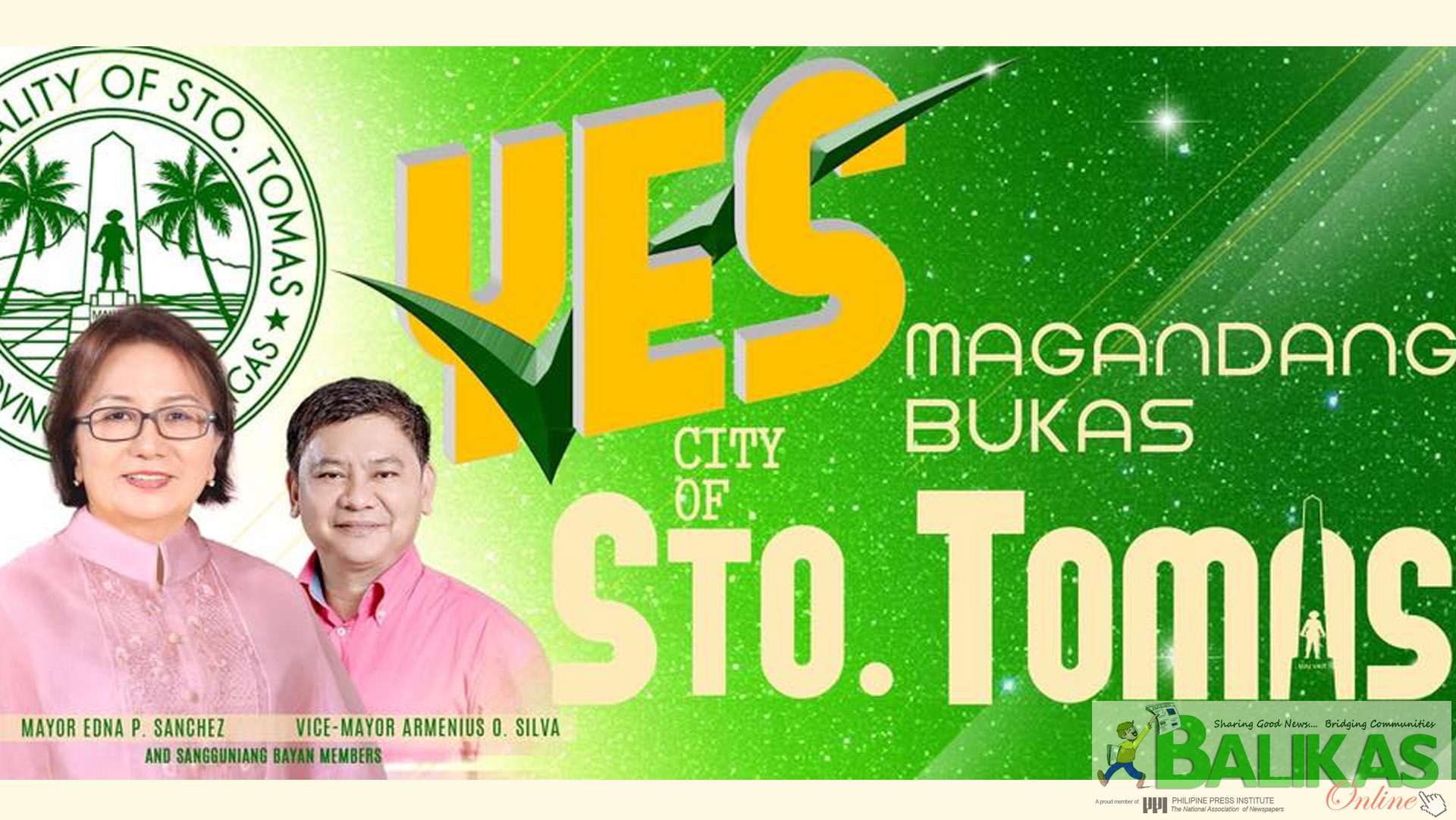 IT could be a question now of which of the two measures will prevail – the Charter or the enabling law that converts a certain municipality into a component city of the province, or the resolution of the Comelec passed even prior to the signing of the cityhood charter?

Around 92,000 registered Tomasinos are now getting deprived of the chance to exercise their right to suffrage and cast their votes whether to ratify or not the cityhood of Sto. Tomas, an execise specifically mandated in the charger and guaranteed by the Constitution. As of April 29, 2017, Sto. Tomas town has a total 91,342 registered voter.

The cityhood bill, sponsored by Third District Representative Maria Theresa Collantes, came into law as Republic Act No. 11086 entitled “An Act Converting the Municipality of Sto. Tomas in the province of Batangas into a Component City to be known as the City of Sto. Tomas.”

Mayor Edna P. Sanchez said that even prior to the approval of the charter, the municipal government of Sto. Tomas has already appropriated the budget for the holding of the plebiscite as required by the Comelec.

But it was learned that even prior to the approval of the RA 11086, the Commission on Election En Banc during its regular meeting on September 29, 2018 acted on the Memorandum of Director Maria Norina S. Tangaro-Carsingal of the Comelec Law Department and resolved not to hold the plebiscite within 90 days after approval of the charter as mandated, but to postpone it to a latter date.

The Commissioners reasoned out that the Comelec have the on-going preparation for the conduct of the plebiscite for the establishment of Bangsamoro Autonomous Region pursuant to Republic Act No. 11054 and the forthcoming National and Local Elections in 2019. Instead, the Commission also resolved to conduct the plebiscite for cityhood ratification within 120 days after the May 13, 2019 National and Local Elections.

“But it would be a different thing should our plebiscite be held on a latter date which is inconsistent with the mandated provision of our Charter,” Mayor Sanchez pointed out.

It is for this reason that the local chief executive asked in a letter to lawyer Bartolome Sinocoruz, Jr., Deputy Executive Director for Operations, to reconsider the Comelec Resolution.

Sto. Tomas is the first municipality to be converted into a component city during the Duterte administration.

Local observers said the local election office can easily handle the plebiscite because it will only cover the municipality of Sto. Tomas and there would only be “yes” and “no” votes to be tallied. Moreso, it will not also cost any penny from the COMELEC budget because as mandated by law, all expenses relative to the plebiscite will be borne by the municipal government of Sto. Tomas and Sanchez has affirmed that said budget has already been appropriated.

Truly, the illusive citihood status of Sto. Tomas town in Batangas is so near… yet, with the Comelec delaying the ratification, it is, indeed, so far.|