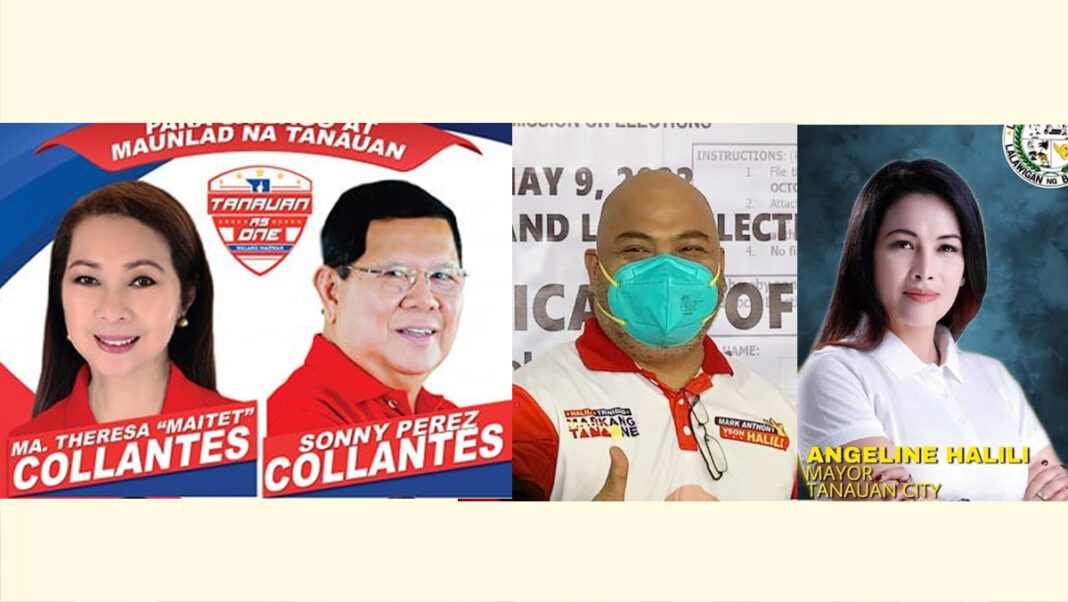 TANAUAN City – IT will be a tug-of-war between the Collantes and Halili clan in the third district of Batangas that cover the cities of Tanauan and Sto. Tomas and the towns of Agoncillo, Alitagtag, Balete, Cuenca, Laurel, Malvar, Mataasnakahoy and Talisay, come May 9, 2022 National and Local Elections.

For mayoralty of the City of Tanauan, former Third District Congressman Nelson S. Collantes filed his Certificate of Candidacy (CoC) on Wednesday and will have a face-off with Mark Anthony Y. Halili, the eldest son of the late Mayor Antonio Halili who was assassinated on July 2, 2018.

Mr. Collantes has served as representative to the Lower House in two consecutive terms from 2010 to 2013 and 2013 to 2016; and was succeeded by his wife Ma. Teresa.

On Tuesday, incumbent Congresswoman Ma. Teresa Collantes filed her COC for an attempt to secure a third term. She succeeded her husband in 2016 and held the position until present.

She is reported to have a face-off with incumbent Tanauan City mayor Mary. Angeline Halili who will br filing her COC until Friday, October 8.

The Collantes couple filed their candidacies under the Nationalist People’s Coalition (NPC) and departed from their previous political parties; the husband being a member of Liberal Party and the lady solon of the PDP-Laban.