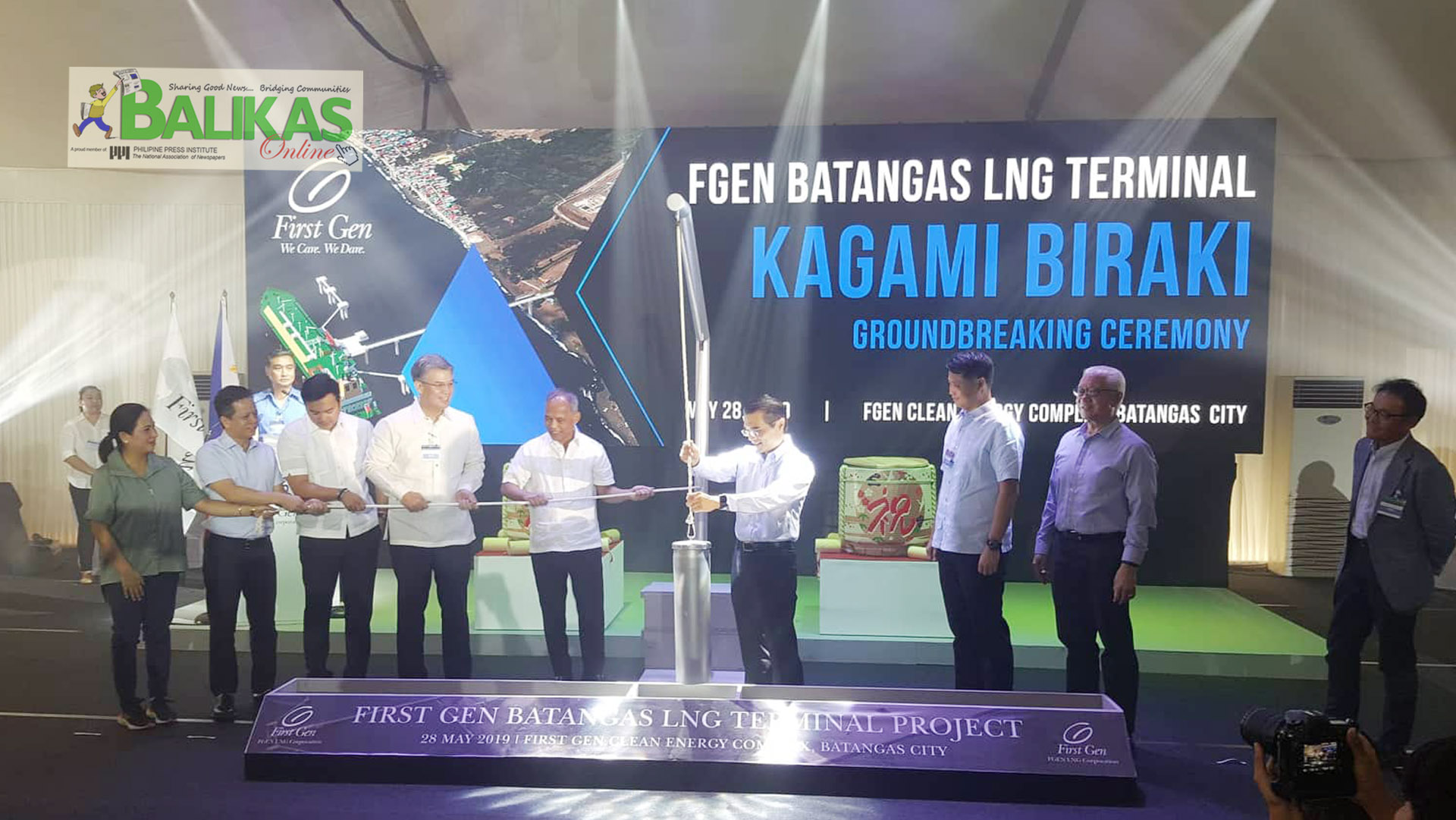 BATANGAS City – WITH the impending decrease of supply of natural gas from the country’s main source off Palawan, stakeholders from the private sector take a bold move to ensure with sufficient supply to keep various natural gas-fired power plants running.

Before the end of 2018, industry player First Gen takes the lead with the signing of  a joint development agreement with Japan’s Tokyo Gas and formed First Gen LNG Corporation for the construction of a liquefied natural gas (LNG) terminal project – and this leads to the Kagami Biraki groundbreaking ceremony and laying of time capsule at the First Gen Clean Energy Complex (FGCEC) in Batangas City, May 28.

FGEN LNG has now completed significant pre-development work for its planned Liquefied Natural Gas (LNG) Receiving Terminal to make the project site “construction ready”. Once completed, the LNG terminal will allow the country to import liquefied natural gas and ensure a continuing stable supply of clean energy once the Malampaya gas field is depleted. The LNG Terminal Project could possibly be the most significant energy infrastructure project to be undertaken in the Philippines in more than two decades.

The Japanese term “Kagami Biraki”, which means “opening the mirror”, is a traditional Japanese ceremony originating in acts said to have been performed by samurai warriors even before the Edo period which dated back to 400 years ago.

“A Kagami Biraki ceremony is held to mark the start of something new, as symbolized by the act of breaking open a round sake barrel, representing harmony and good luck. It is then considered that the transition has taken place,” said Kunio Nohata, Member of the Board, Senior Managing Executive Officer and Chief Executive of the Global Gas Division.

“Given the Joint Development Agreement between Tokyo Gas and First Gen, we consider that the holding of a Kagami Biraki ceremony is an appropriate way for First Gen and Tokyo Gas to celebrate our collaboration, the completion of the significant pre-development work, and the commencement of the next phase of the development of the project,” said Federico R. Lopez, Chairman and CEO of First Gen.

FGEN LNG believes First Gen LNG Terminal will play a critical role in ensuring the energy security of the Philippines, and the Luzon grid particularly when the indigenous Malampaya gas resource no longer produces sufficient fuel for the country’s existing gas-fired power plants, and certainly not for additional gas-fired power plants. The entry of LNG will encourage both industrial and transport industries to consider it as a replacement to more costly and polluting fuels.

Tokyo Gas, headquartered in Tokyo, Japan, is a leading LNG player with 130 years of experience and more than 50 years of experience in the LNG business. Tokyo Gas is one of the largest purchasers of LNG in the world with an annual volume of 14 mtpa. It has over 63,000 kilometers of gas pipelines serving more than 11 million customers.

In his message, Energy secretary Alfonso Cusi expressed his gratitude to the First Gen’s bold move of taking the challenge as the country is facing the depletion of natural gas supply in a near future.

Also present in the ceremony are the local government officials led by Batangas governor Hermilando I. Mandanas, Congressman Marvey Mariño, Batangas City mayor Beverly Rose A. Dimacuha and members of the Sangguniang Panlungsod. Senator Sherwin Gatchalian, chairman of Senate Committee on Energy, and Marinduque Representative Lord Allan Velasco, chairman of Committee on Energy at the  House of the Representatives., among others.|#BALIKAS_News