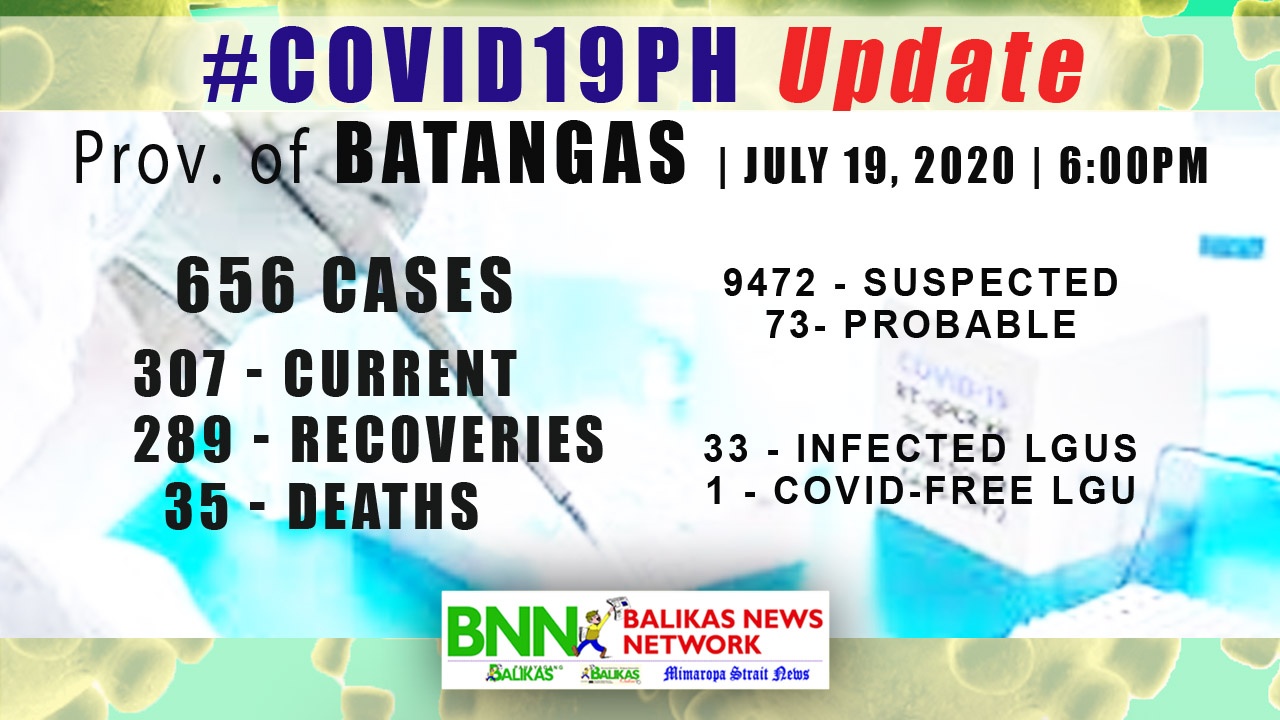 WITH two (2) days left to complete the first three (3) weeks that the Province of Batangas was placed under the modified general comunity quarantine (MGCQ), the province have recorded a very high 655 confirmed positive cases of corona virus 2019 (CoVid-19) as of July 19, a record that more than doubled the 322 cases recorded as of end of June 2020.

The data at hand covers the collated reports of various local government units (LGUs) and their respective City/Municipal Health Offices (C/MHOs), their Rural Health Units (RHUs) of their #BeatCovid-19 Task Force as of office closing time (6:00 p.m.) of a given day. Noticeably, the reports covers more cases than those reported by the Provincial Department of Health Office (PDOHO) in Batangas which have a cut-off at 4:00 0’clock in the afternoon.

Balikas News Network’s monitoring reckons from March 1, 2020, the first day that the onset of symptoms was recorded on the first CoVid-19 case in the province.

At the close of Week 20 (July 18), there are 46 new cases recorded, the highest number of cases reported in a single day since the oubreak of the pandemic in Batangas.

Those LGUs with the highest number of new cases reported during the week include the four (4) component cities of Batangas, 26; Sto. Tomas, 25; Tanauan, 16; and Lipa, 10. For the component municipalities, the top three (3) with highest new cases include San Pascual, 25; Rosario, 22; and Cuenca, 16.

Based on the reports of the respective LGUs, the surge of cases in Batangas City, and Cuenca are attributed to the targeted expanded testing capacity that includes the frontliners in their respective LGUs. However, the surge in San Pascual is due to the influx of overseas Filipino workers who have been tested negative in different facilities in Manila but whose samples turn out to be positive when they were re-tested as a protocol of the LGUs for returning OFWs. There are also cases of exiting OFWs who were required by their agencies before departure but were also tested positive.

Meanwhile, the surge of cases in Rosario were due to local transmission as most cases were traced to previously reported cases.