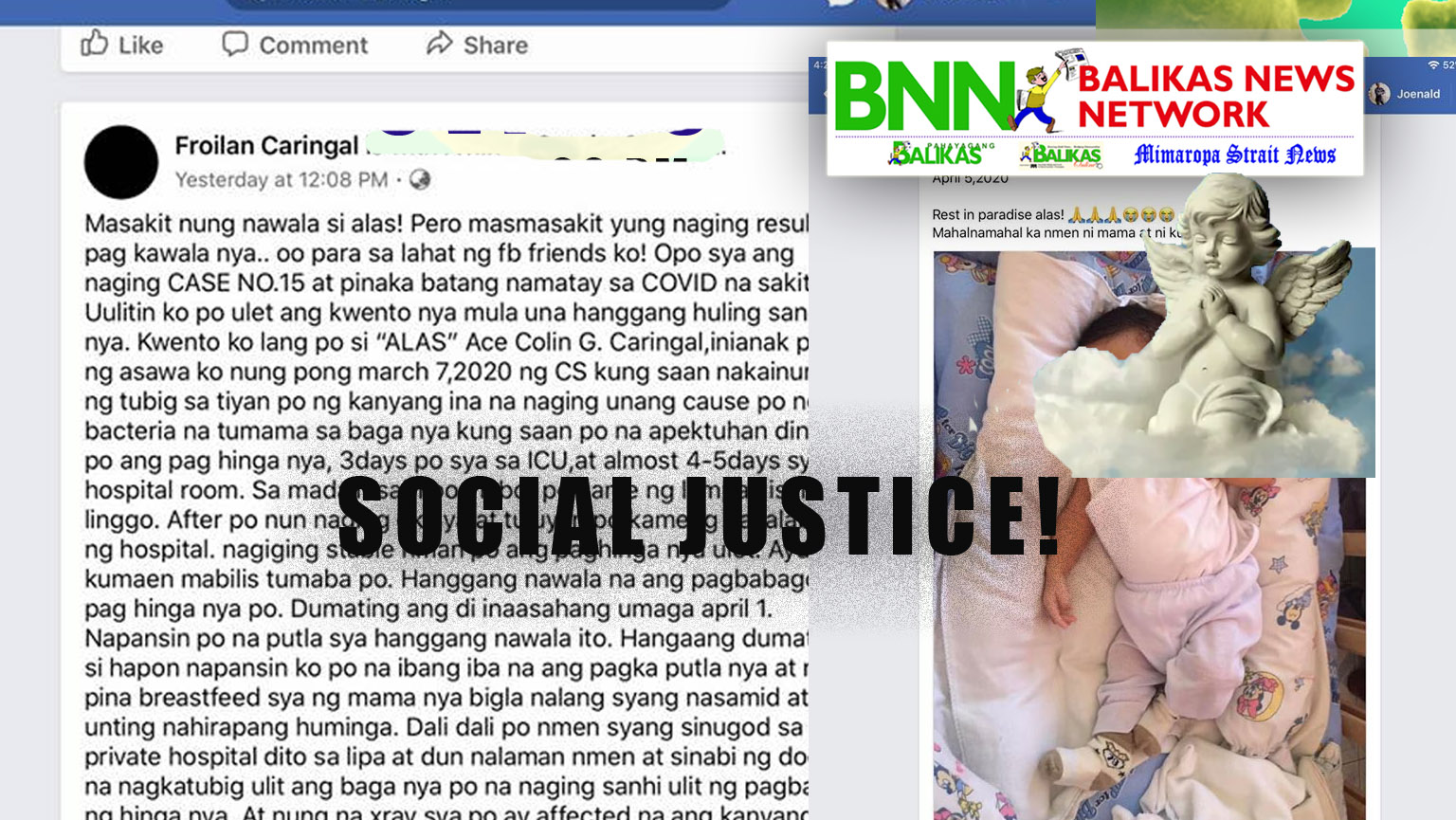 Thus, this is how Froilan Caringal of Barangay Lodlod, this city, cried foul over the alleged injustices his family experienced the wrath of world’s pandemic croona virus disease.

In his social media post, Saturday afternoon, Caringal publicly decried how a private hospital and the local government acted on the unfateful experience that cost the life of his son, Ace Colin G. Caringal, whom the city government announced through Mayor Eric B. Africa’s page as CoVid-19 Case No. 15.

“Uulitin ko po ulit ang kwento nya mula una hanggang huling sandali nya”, Caringal openly narrated. He said that his wife gave birth to his son Alas via ceasarian section on March 27 in a private hospital here. The fluids which the child has taken inside his mother’s womb may be the cause why the child’s lungs were infected and he has to stay inside the intensive care unit (ICU) for another three (3) days, and after which they have to stay at the regular hospital room amost 4 to 5 d ays thereafter.

When the child’s condition improved, they were discharged by the hospital and the child continuously developed, his milk intake manifested his growth and his breathing normalized. Then on April 1, they noticed that that Alas was turning pale and when his mother put him on a breastfeed, Alas choked and experienced difficulty of breathing.

“Ang ganda ng pulong namin ni private hospital my bakante daw pong room nung una.. hanggang dinahilan nman po na wala daw man power at pinaka huling dahilan ay walang ppe suit. Sa madalit sabi gusto nila kami ilipat dahil pui daw po si alas” (Our conversation with the private hoispital is very clear that there is an available room; but they later on informed us atht there would be brownout and at last, they reason out aht there is no available personal protective equipment (PPE). We surmised that they only want us to look for other hospital as Alas is already a person under investigation (PUI) at that moment).

“Ngayon bilang magulang kung nakikita mo ang anak mo na nalaban at may pag asa sa hospital nila bakit pa kaylangang ilipat?! Hanggang dumating na sa puntong dinaan na kami sa bill! 750 per hour na ang ginawa nila samen sa icu nilang sinasabi na nasa labas ng hospital nila bukod pa bayad sa aparato! Nalobo na daw bill namin!” (As a parent, if you see that your son is fighting for life and that there is still hope to survive in that hospital, why there’s a need to transfer to another hospital? Then the hospital shifted to billing as a reason to force us (to decide for a transfer). They are now charging us P750 her hour in a makeshift ICU outsode of the hospital building, plus the cost of using the apparatus. Ang our bill is ballooning!)

“Bakit mas priorty pa nila ang bill kesa sa buhay?! Yun ang pumapasok sa isip ko nung panahong yun! Di kame mayaman. Pero buhay ang pinaguusapan! Kinikita pa ang pera! Eh anu kung lumobo ang bill! Ang mahalaga mabuhay ang anak ko.. pero sa bandang hule my kumausap na doktor at pilit kameng inihanap ng malilipatan na kung saan kung anu daw aparato meron sa kanila ay yun din daw ang aparato na meron sa lilipatan nmen. Nagtiwala kame kase inaalala din daw ni doktor ang bill nmen at magaling din daw na mga doktor mag aasikaso sa anak ko! At mga bata din daw po ang kasama ng anak ko sa building!” (Why are they prioritizing the bill rather than the life of a patient? That’s what entering my mind at that moment. We’re not rich; but it’s the life of my son that matters. Money can be earned! So, what if the bill is ballooning! The life of my son is more important…, but on the latter part, a certain doctor talked to us convincing us that they have found out a hospital where we can tyransfer, with the same apparatus available therein. We trusted him as he said that he is concerned with the ballooning bill in the private hospital, while the doctors in the recxeiving hospital are of the same caliber as they are; and that my child will be treated in a building where only child patients are confined).

“Ito na yung date na lumipat kami ay April 3, 2020 ng 7:30pm ng gabi sa Batangas City na hospital. Pagdating namin dun bawal ang may bantay base po sa patakaran. Hanggang ipinatawag ako ng hospital at sinabing pwede daw pag bata ang patient. Ito ako tuwang-tuwa kasi makikita ko ang progress ng paggaling ng anak ko at mababantayan ko pa. Andun na yung takot kasi hospital ng PUI yun. Baka kame nga ng anak ko e mahawa. Pero yun pala solo kame sa room. Pero nung nalaman ko ang anak ko lang pala ang baby dun! At nung nakita ko ang anak ko bumagsak ang katawan nya at sobrang namayat!” (Then, here comes the date when we have to transfer, April 3, 2020 around 7:30 o’clock in the evening, to a hospital in Batangas City. When we arrived, no one is allowed to stay and accompany the patient, per hospital protocol. Until I was called and was informed that a companion is allowed to an infant patient. So I was very happy as I can monitor how my child progress. Then there’s the fear since it is a hospital for PUIs, thinking that my son and myself might get infected too. But, I was surprised that only the two of one will be left in the room. Only to find out later that my son is the only patient in that department. And then I saw how his condition worsened, his body deteriorated).

“Ngayun nasan yung assurance na sinabi ng private hospital na kung anu aparato meron sa kanila ay gnun din sa nilipatan namin?! Aparato lang na nakalagay sa anak ko ay oxygen! Bago di agad na lagyan ng dextrose! Kaya bumagsak katawan,at unti unting nanghina na! Hanggang sa huling sandali ng buhay nya tanging naging nais nya ay pagsanin ko sya! At yun na pala ang huling hininga nya! Masakit saking nawala sa bisig ko ang anak ko!” (Now, where was the assurance of the private hospital that what equipments they have are also available here?! The only apparatus connected to my son is an oxygen device! It take too long to have him given a dextrose! His condition worsened and he continuously lost strength. Only until the last minutes of his life, he only wanted me to carry him in my arms! And then, it was his last breath! It’s too painful to have my son died in my arms!)

“Pinagkatiwala namin sya sa mga nag-aral ng medisina! Pero anung nangyari?! Sa bandang huli positive pa sya! Sa bandang huli sinabi nyong covid ang kinamatay nya! Bago sa bandang huli pandidirian pa ng mga mangmang na tao ang pamilya nmen dahil sa covid na sinabi nyo! Hanggang may mga kumento pa na pati magulang positibo! Eto para sa mga taong walang alam! Ngayun kami po lahat ay negatibo sa test na ginawa sa min!!! Ngayon ako nagsalita nung nalaman namin ang test result namin! Andyan si Lord na gumabay para sa katotohanan at hustisya sa nangyare sa amin!” (We entrusted him to those who have studied medicine! But, what happened? At the end, he tuirn out positive! At the end, you would tell us that he died of Covid! And those who are ignorant people will indiscriminately treat us because of that covid issue that you were telling! Until there was a comment that says event he parents must be positive! These are the people who are ignorant! Now that we turn out to be negative on the test that we undergone!!! I came out publicly now that we were informed of the results of our tests! Here’s the Lord who would guide us for the truth and for justice to what has happened to us!)

“Alas anak! Alam kong nakabantay ka sa amin. At salamat dahil ang Diyos ang nagpapakita ng katotohanan. Sana wala ng makadanas ng dinanas namin. At sana matapos na ang lahat ng ito.” (Alsas, son! I know that you’re watching us. And thanks that God allows to have the truth be revealed. We hope that nobody else would experience what we had. We hope that all of these end here.

Baby Alas died on April 5, 2020, his 29th day on earth! He was the youngest to have contacted the corona virus per DOH’s pronouncements via daily virtual presser on April 13.| – Joenald Medina Rayos, BALIKAS News Network