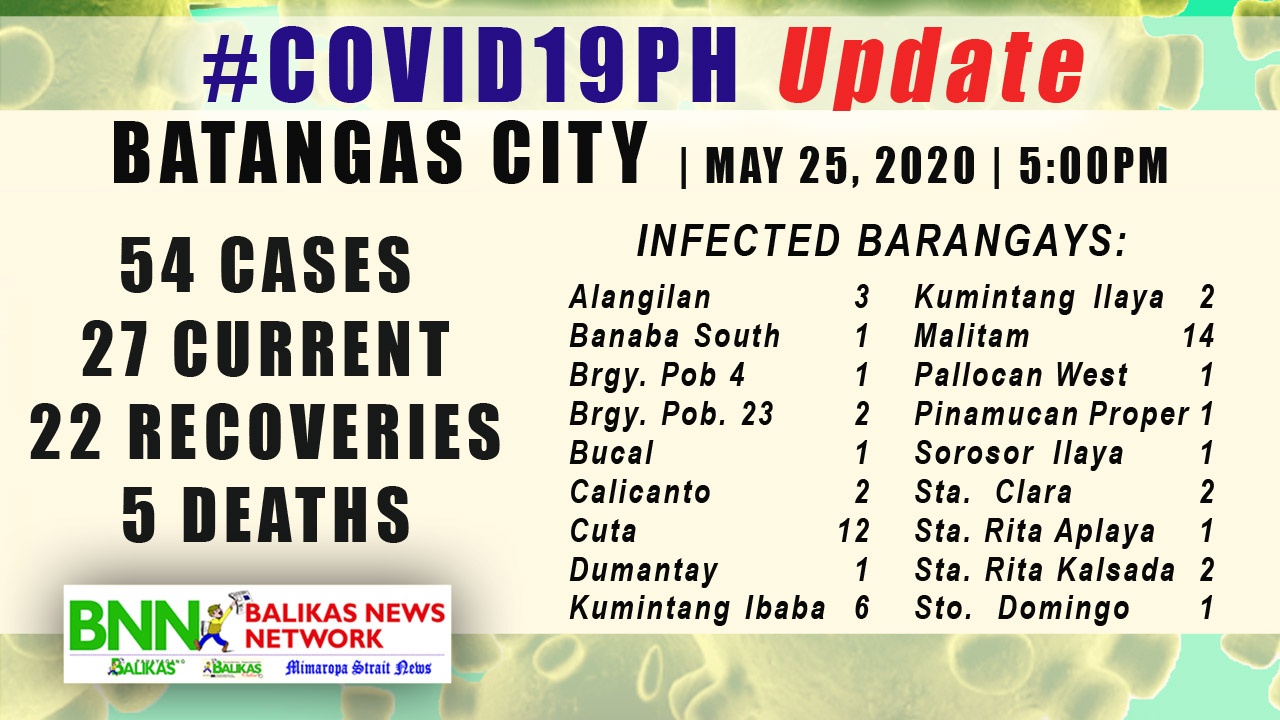 BATANGAS City – “DUE to the recent spike in CoVid-19 cases in Batangas City, Hard lockdown of Cuta and Malitam… will be extended until 1pm of Thursday, 28 May 2020.”

Thus, lawyer Reginald Dimacuha, secretary to the mayor, posted in social media Monday noon, announcing the extension of the hard lockdown being implemented in the cities two barangays that are most hit by the corona virus pandemic.

The city’s main marketplace, Don Julian Pastor Memorial Market (Markets 2 and 3) which are located at the heart of barangay Cuta is also placed under the hard lockdown, although the two residential subdivisions – Mt. View Park Subdivision and De Joya Bayview Village – whose entrances are both inaccessible from other sitios or puroks of barangay Cuta are not included in the lockdown.

The recent spike of cases in said barangays on the week prior to the lowering of risk level from enhanced community quarantine (ECQ) to general community quarantine (GCQ) promted the authorities to asked the Inter-Agency Task Force on the Management of Emerging Infectious Diseases (IATF-EID) in the region to exempt the interconnected barangays of Cuta, Malitam, Wawa and Sta. Clara from the lifting of the ECQ. Relative to this, Mayor Beverly Rose A. Dimacuha has issued last Friday, May 22, the Executive Order No. 25, S. 2020 placing the barangays Cuta and Mal;itam under hard lockdown effective 1:00 oclock in the afternoon of Saturday (May 23) until 1:00 o’clock in the afternoon of Monday (May 25).

However, when the new batch of swab tests results was released by the Research Institute for Tropical Medicine (RITM) Monday included nine (9) new cases for Malitam, the local authorities decided to extend the hardlockdown to until noontime of May 28, Thursday.

Under the hardlockdown status, a No One In , No One Out Policy is being implemented as the local task force has designated members of the Philippine National Police, Bureau of Fire Protection, City Disaster and Risk Reduction Management Office (CDRRMO), Traffic Development and Regulatory Office (TDRO), Defense and Security Services (DSS), Philippine Coast Vgaurd (PCG), and the Armed Forces of the Philippines (AFP) as sintenels in key areas to ensure the maximum compliance of the public to the security order. As of this writing, Batangas City has a total of 54 confirmed cases although only 27 of which are active. A very high recovery rate of 41% or 22 cases and only 9% mortality or 5 deaths.| – BALIKAS News Network