DOH confirms 36 Covid cases with Delta variant in the CALABARZON 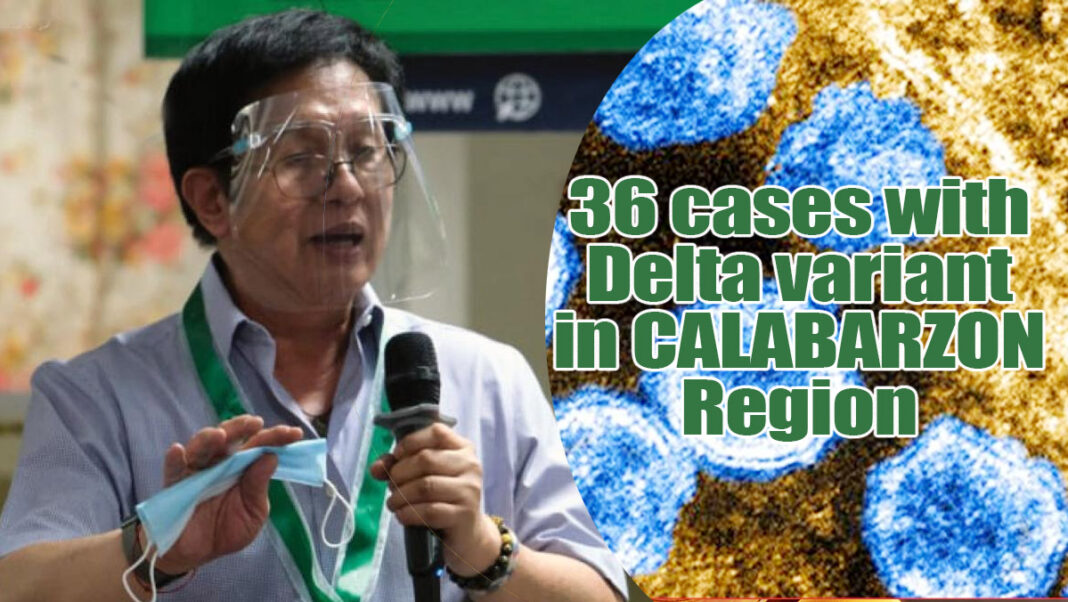 THE confirmed cases of corona virus with Delta variant in the CALABARZON region has even more increased to 36 as of the last count by the Department of Health (DOH) on Thursday.

Among the provinces with reported cases were Cavite (9 cases), particularly in Imus, Cavite City, General Trias, Silang and Carmona; Laguna (17 cases), in the towns of Bay, Los Baños, City of San Pedro, San Pablo City and Calamba City; Batangas (6), in the municipalities of Bauan, Lemery, San Juan and Lipa City; Rizal (4), in Cainta and Rodriguez.

No reported case in the province of Quezon.

Of the said number, only three (3) are active cases, 21 has already recovered, 11 are for reverification and one (1) with pending test result.

“We need to immediately identify the causes of the virus, how it originates and how it was transmitted in order to stop its spread in the communities,” he stated.

“Samples taken from the contacts of the positive cases were already sent to the Philippine Genome Center for validation. What is important right now is for everyone not to panic and continue to follow community health protocols and most important is to get vaccinated against the Covid virus.”

The health official even urged the public to get vaccinated at once that the vaccines would be available in the localities to prevent getting severe or critical even it contacted witht eh virus.

A person with Delta Variant experiences cold with the absence of cough, loss of sense of smell, fever and fatigue.

Persons with co-morbidity or those with underlying medical conditions such as high blood pressure, heart problems or diabetes, senior citizens and very young children are among the susceptible population that are most likely to acquire Delta Variant.

“The DOH regional office, together with the local governments of the affected communities are constantly working and conducting health assessment, case investigation and contract tracing to makataan’s ensure the health and safety of the public,” Janairo said.| – BNN