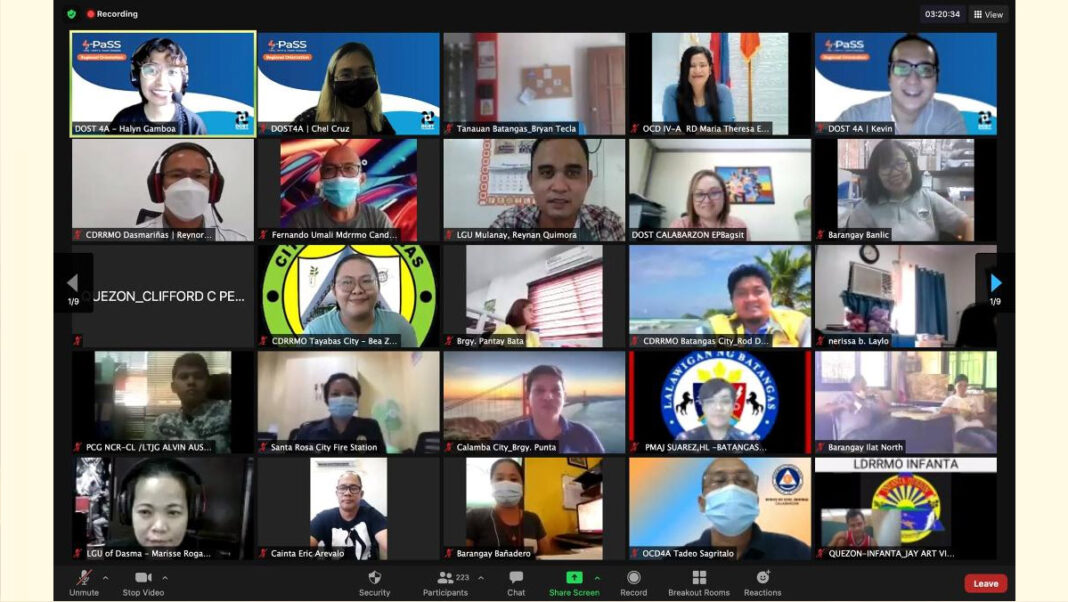 The Department of Science and Technology-CALABARZON (DOST-CALABARZON), in coordination with the Regional Task Force (RTF) IV-A, convenes 375 participants coming from provincial and city DRRM officers, RTF IV-A members, and citizens in the region for a public orientation on Safe, Swift, & Smart Passage (S-PaSS) last June 18 via Zoom and Facebook Live. This is one of the efforts of the agency to increase the public awareness on the implementation of S-PaSS in the region and to prevent the recently reported proliferation of fixers and fake documents from happening again.

The S-PaSS is a free online travel management system developed by DOST-VI that allows access to information on travel restrictions and requirements making travelling of locally stranded individuals, returning overseas Filipinos, emergency travelers, and other travelers safe, swift, and smart during this COVID-19 pandemic.

Ms. Emelita P. Bagsit, DOST-CALABARZON OIC-Regional Director, welcomes the participants and proudly reported that the S-PaSS is 100% implemented in all the five provinces and one highly urbanized city (Lucena City) in the region. She also commended the performance of Batangas Philippine Ports Authority (PPA) for having the highest record on the number of scanned Travel Coordination Permits (TCPs) from all the ports in the country.

Office of Civil Defense IV-A Regional Director and RTF IV-A Chair Maria Theresa Escolano expressed her strong support, belief, and confidence in the use of S-PaSS as announced that a joint resolution of regional COVID shield task force and RTF IV-A will be issued stating the strict implementation of S-PaSS in the region. “Lives are at stake here. There is no reason for us not to implement the S-PaSS,” she remarked.

Likewise, DILG IV-A Regional Director Ariel O. Iglesia commended the participating LGUs in this virtual event, “Your participation in this orientation yet again stretched your already limited time and capacity that is why I salute you for always being responsive whenever duty calls.” He also recognized DOST-CALABARZON for being an active and generous partner through the S-PaSS implementation and hoped for a more progressive collaboration in the future.

The discussion on S-PaSS overview and Frequently Asked Questions (FAQs) followed afterwards as presented by Mr. Kevin Brian B. Paris, SRS II. He also showed a hands-on demonstration on how to create S-PaSS account and how to check travel requirements and apply for TCP and Travel Pass-through Permit (TPP). Engr. Francisco R. Barquilla III, OIC-ARD for Technical Operations, then provided the updates of the S-PaSS implementation in the region such as conduct of orientations for CALABARZON LGUs as early as March 2021, assistance in creation, testing, and activation of S-PaSS QR scanner accounts, and conduct of promotional campaigns in various media outfits. As of June 18, there are 90,298 registered S-PaSS users in CALABARZON out of 1,654,510 total users in the country.

Mr. Rodrigo Dela Roca, CDRRMO – LGU Batangas City, shared the initiatives done by the LGU Batangas City with regards to the S-PaSS implementation in their locale. He presented how they used social media in their information and education campaign, conduct of virtual orientation for barangays and communities, and establishment of QR code scanner in Batangas Port.

In his closing remarks, Engr. Barquilla thanked all the participants and partner agencies for their support in the use of S-PaSS and hoped for their continuous participation on its implementation.

To know more about the S-PaSS, you may visit their website (https://s-pass.ph/) and Facebook page (https://www.facebook.com/spassph). Check this link (https://tinyurl.com/S-PaSSOrientationCALABARZON) also to watch again this virtual public orientation on S-PaSS.|