The training started with a brief lecture on basic food hygiene and current good manufacturing practices by Ms. Claire Zubia and Mr. Joel Rivadeneira, experts from UPLB-CAFS-IFST. They also tackled the pre-production process which includes raw materials and equipment preparation. 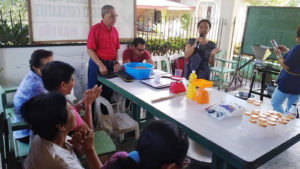 After the pre-production process, experts started to discuss and demonstrate peanut butter processing proper. They started roasting the peanuts and mixing other ingredients. A fabricated grinder of the cooperative was also utilized by experts. However, the grinder did not function well in grinding the peanuts to achieve standard texture.

As a result, the yield peanuts have become grainy and course which are not suitable for peanut butter. The experts resorted in using a conventional blender instead. The process was slower but the group produced a finer texture yield. Experts advised the group to make alterations on the fabricated grinder.

According to them, the alterations on the equipment should materialize a standard ground peanut yield applicable as principal blend for peanut butter production to attain product consistency.

Meanwhile, experts also demons-trated how to make a chocolate-flavored peanut butter. They melted the chocolate concentrate and incorporated it during blending of peanuts. The result was darker than the usual peanut butter but it gives a more tasteful flavor that could delight customers as referred to the thoughts of the members.

The beneficiary, Paharang West Multipurpose Cooperative, is a duly registered cooperative in Batangas City. It consists mostly of senior citizens residing in Paharang West, Batangas City. The cooperative is engaged in merchandise, credit and now food manufacturing and processing. Through Juanito Almero, Chairman, they tapped DOST Batangas to expand the knowledge of the group in peanut butter processing.| #BALIKAS_News