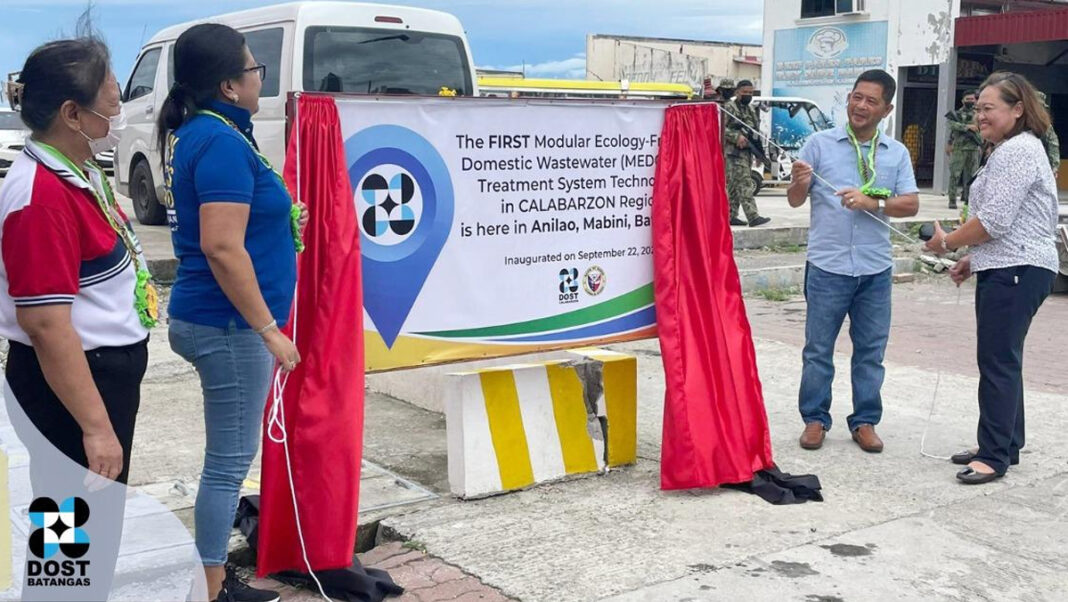 The adoption of MEDOWW Treatment System technology is one of DOST-CALABARZON’s answers to the call of the Local Government Unit of Mabini (LGU-Mabini) for a science and technology-based solution to mitigate the environmental pollution brought about by untreated wastewater.

Generally, the technology works to improve the wastewater management at the Municipal Tourism Office Building and Public Market, both located at Anilao Proper. The technology uses a flexible design for domestic wastewater treatment and establishes an effective combination of anaerobic and aerobic mechanisms. It is built with several chambers and operates with the application of Vigormin organominerals which hastens the decomposition of harmful bacteria that lodge in septic tanks.

The application of Vigormin helps in the bioremediation and at the same time in the settling of pollutants or pollution load. The reason for having several chambers in the design is to allow settling which results to lowering of the particulate settleable solids (PSS). Vigormin is then consumed by the good bacteria present in the septic water which enhances the bioremediation condition so the natural bacteria can do its job in cleaning the water. The combined effect of MEDOWW design and application of vigormin is already proven to improve the characteristics of community domestic wastewater.

What makes MEDOWW more relevant to Anilao, Mabini, Batangas is that it reduces health risks due to sanitation problems, ineffective septic system, drainage system failure, and water contamination. It also promotes responsible water utilization, which is significant to a world-known dive site like Anilao, Mabini. More than this, the MEDOWW technology ensures that effluents meet the requirements of the DENR Administrative Order (DAO) 2016-08 known as the Water Quality Guidelines and General Effluent Standards of 2016.

Based from the previous deployment of MEDOWW technology in Palo, Leyte, San Fernando, La Union, Siargao Island, LGU Mainit and LGU Alegria, Surigao del Norte, and Boracay Island among others, varying concentrations of organominerals were used to determine the optimum retention time and treatment dosage to wastewater.

Both the MEDOWW Treatment System and Vigormin organominerals are technologies developed by Dr. Merlinda Palencia, a Chemical Engineering Professor at Adamson University, with funding from the Philippine Council for Industry, Energy and Emerging Technology Research and Development (DOST-PCIEERD).

The adoption of this technology for Mabini, Batangas was funded by DOST-CALABARZON and the spinoff company of Adamson University, Envigor Natural Products Manufacturing Inc., facilitates its construction based on the specifications and design requirements of Dr. Palencia.