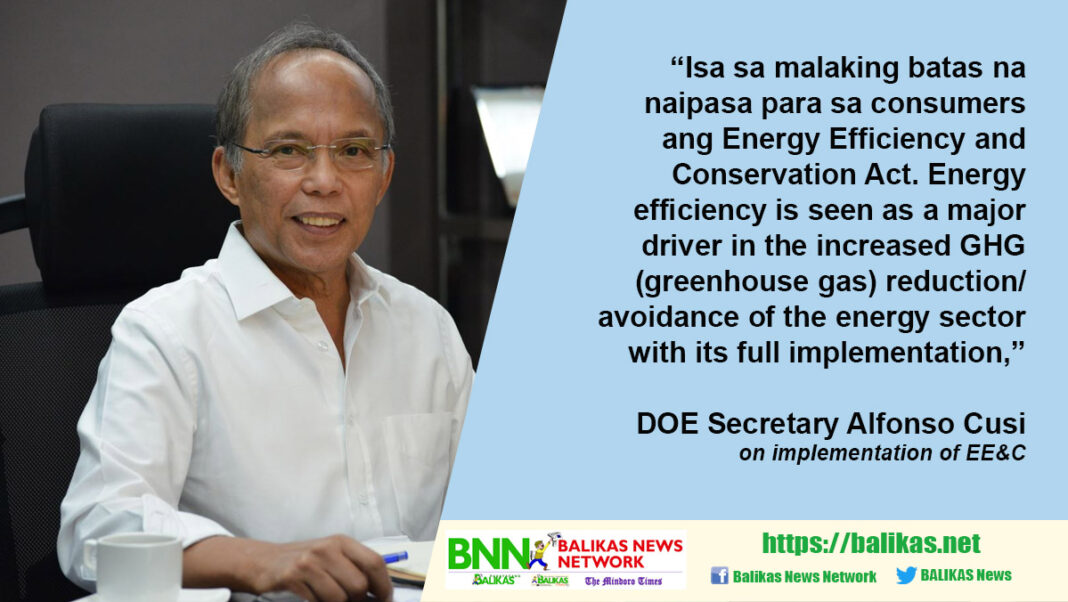 TAGUIG CITY — Energy Secretary Afonso Cusi on Thursday said full implementation of the Energy Efficiency and Conservation Act (EE&C) will not only help mitigate the disastrous effects of climate change but would also serve to lower power costs for consumers.

GHG is any gas in the atmosphere which absorbs and re-emits heat, keeping our planet’s atmosphere warmer than it otherwise would be, increasing the amount of water vapor in the atmosphere, which can lead to extreme weather phenomena such as prolonged drought, torrential rains, severe snowstorms, and stronger typhoons.

Among others, the law calls for the development and enforcement of a mandatory energy efficiency rating and labeling system for energy-consuming products such as air-conditioners, refrigerators, and television sets as well as performance labeling for vehicle manufacturers, importers, and dealers.

It also mandates local government units to implement the Guidelines on Energy Conserving Design on Buildings for the construction of new buildings.

Covered establishments are required to submit an Annual Energy Consumption and Conservation Report (ECCR) by the 15th of April of every year to the Department of Energy (DOE).

To fully implement the law, Sec. Cusi said the DOE has been actively coordinating and partnering with other agencies and stakeholders to educate local government units on how they can be agents of energy efficiency and conservation.

Although challenges may continue to rise, Sec. Cusi said the DOE remains committed to securing a sustainable, clean, and affordable energy supply for the country.

Cusi believes the EE&C would be a “game-changer” that would eventually integrate the best practices on energy efficiency and conservation in the way of life of Filipinos.

The law was the result of DOE’s efforts to pursue its advocacy of curbing energy demand without sacrificing economic productivity.

Cusi signed the Implementing Rules and Regulations (IRR) on 22 November 2019 and became effective on 21 December 2019.|-BNN/doe