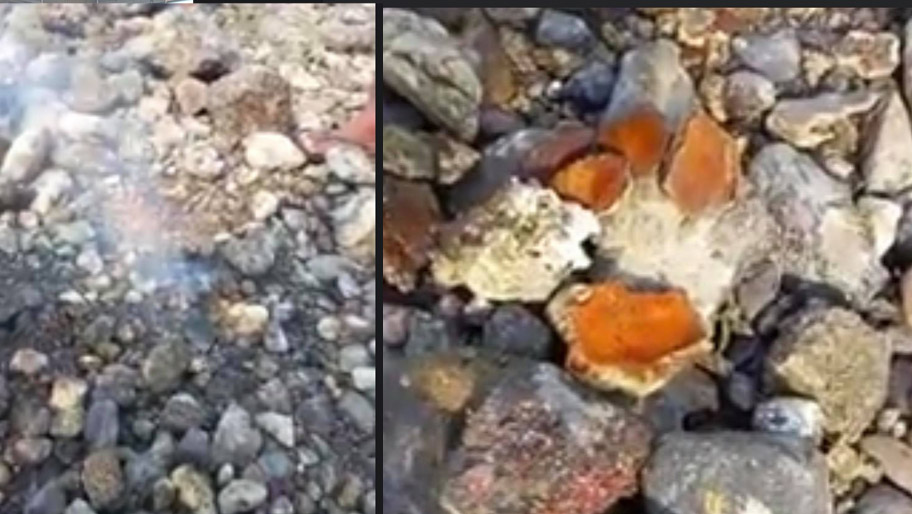 BAUAN, Batangas – IN the midst of the abnormalities of Taal Volcano and the earthquake swarm that occurred in Batangas province few years back, the people of this town were stunned of the unusual flaming of stones near the shoreline off the boundary of barangays Sta. Maria and San Miguel here, for several days since Monday.

A local resident posted in the social media a video of the flaming that immediately caught the attention of the public as well as the local authorities.

On Wednesday afternoon, a joint ocular investigation of the Philippine Coast Guard (PCG), the Philippine National Police (PNP) and the Municipal Disaster and Risk Reduction Management Office (MDRRMO) revealed that the flaming is not an unusual phenomenon of nature, but a case of gunpower burning from a vintage bomb.

Municipal Administrator Richard Cabral told the BALIKAS News that a fisherman is about to go back home from fishing over the waters of Batangas Bay, when out of a sudden, his fishing nets caught a vintage bomb.

The fisherman first thought that what he got is just an ordinary metal scrap that he could sell in a junkshop, but when he unloaded it from the boat, it was torn into pieces. Villagers demanded that the object be turn over to the barangay authorities.

Meanwhile, the other half was full of gunpowder and was burned. Fearing that it will explode, the fisherman buried that object in the shoreline, however, when seawater subsided during low tide, still smokes of the flaming gunpowder surface causing the public to think that there’s something phenomenal underneath, until the investigation revealed that indeed, gunpowder from a vintage bomb caused that flaming and smokes which eventually subsided.|