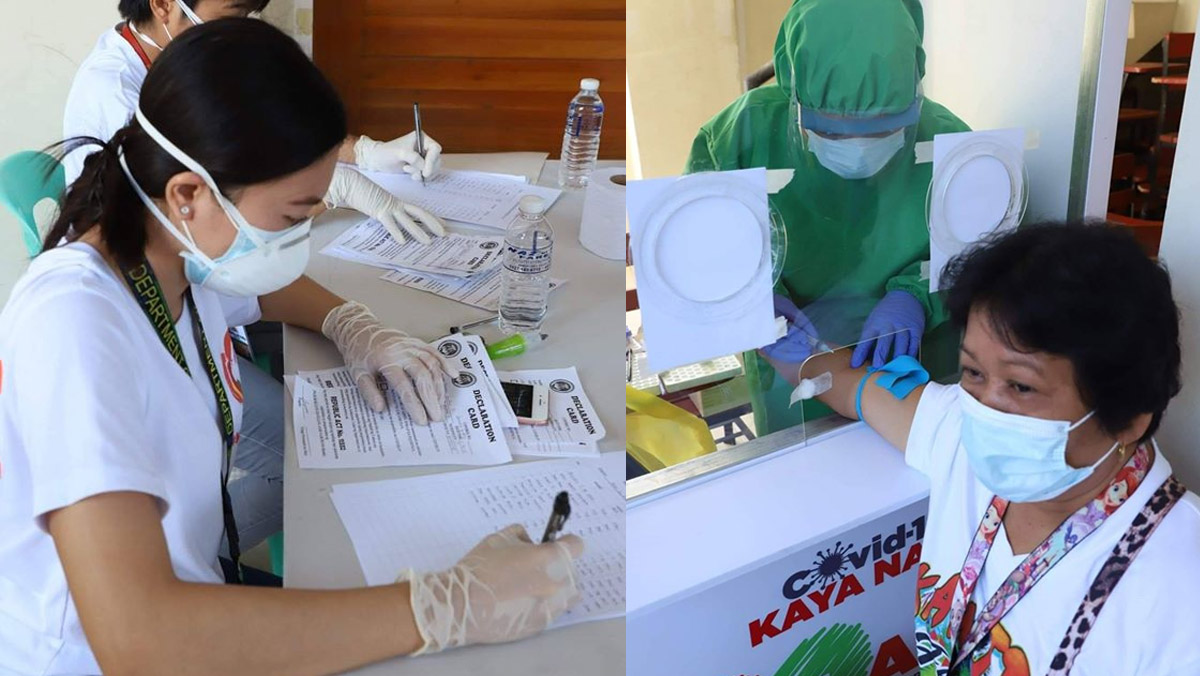 CALACA, Batangas – HUNDREDS of residents of Barangay Putting Bato, this municipality, filled up the chairns lined up one meter apart, filling up the forms and await their turn to be called to occupy the designated chair at the testing station, Tuesday morning.

These residents voluntarily respond to the call of the municipal government for a rapid testing for corona virus disease 2019 (CoVid-19) which is being undertaken by the duly designated personnel of the Municipal Health Office under the supervision of the Ospital ng Calaca. The said hospital processe the testing and interpret the results.

In an interview Tuesday, Mayor Sofronio Nas Ona said the local government has appropriated P30-million to finance the mass rapid testing of his constituents as he believes that there is no other immediate action more appropriate to do to counter the pandemic.

“We believe that mass rapid testing is the only available action to do at this period in time when the case is still spiraling up and yet we want to resume the operation of businesses to keep our economy afloat again. We firmly believe that rapid testing is very necessary as we our planning some programs as we prepare for the new normal,” Mayor Ona pointed out.

Around 17,000 orange card holders in the municipality are expected to benefit from the program. However, those Calaqueños who are not yet a cardholder may right there and then fill-up the application form at the barangay hall or at a public school in a particular barangay where the rapid testing is being done.

“While the program intents to cover all the residents of the municipality, still, this is not compulsory among our people, the residents may still choose not to undergo the testing if they are not yet prepared,” Municipal Information Officer Robenson Sale said.

Should after the scheduled testing in a particular barangay and a resident thereafter decided to avail of the testing, all he/she needs to do is to proceed to the Ospital ng Calaca with his/her orange card and have his testing done at the hospital.

However, all the employees of the municipal government, and all the frontliners in the town of Calaca have undergone rapid testing. “Even those Calaqueños working outside the municipality as medical personnel have to undergo rapid testing here,” Ona added.

According to Ona, the municipality is spending around P1,000 for every testing kit, the paraphernalia used, the personal protective equipment (PPE) used by the personnel and the processing.

Since the start of the antibody rapid testing activity on May 18, there are about 5,000 individuals who have undergone the testing, including the more or less 4,000 workers in different companies and industrial locators in Calaca who have made it mandatory for the employees to undergo the testing.

“We are very fortunate that the business sector has actively participated in this undertaking as the management of companies themselves made it mandatory for their employees, trucking services personnel and even utilities personnel to undergo the testing, and the companies themselves have shouldered the costs of the testing. They even replicate this testing in some other areas where they also have operations,” Ona proudly shared.

“While we know that confirmatory test via RT-PCR testing have to be done for those who were tested positive via antibody rapid testing, at least we can at once separate those whoa re suspected to be positive of the virus and immediately undertake the necessary action properly,” the mayor further said.

All those who were tested positive at the rapid test are being swabbed for RT-PCR test and while waiting for the result, said patients are being isolated in the quarantine facility in Barangay Cahil. The facility is a private conference center of a Catholic religious brothers being run by the municipality as quarantine and isolation areas of suspected and probable CoVid-19 patients. If the RT-PCR test turn out to be positive and the patient is symptomatic, said patient will be transferred to the Philippine General Hospital (PGH) in Manila.     As of this writing, the town of Calaca has recorded only two confirmed cases of CoVid-19. The first patient, a frontliner, have already recovered; while the second patient is a worker who was tested positive via antibody rapid test and was confirmed via RT-PCR test.| – BALIKAS News Network