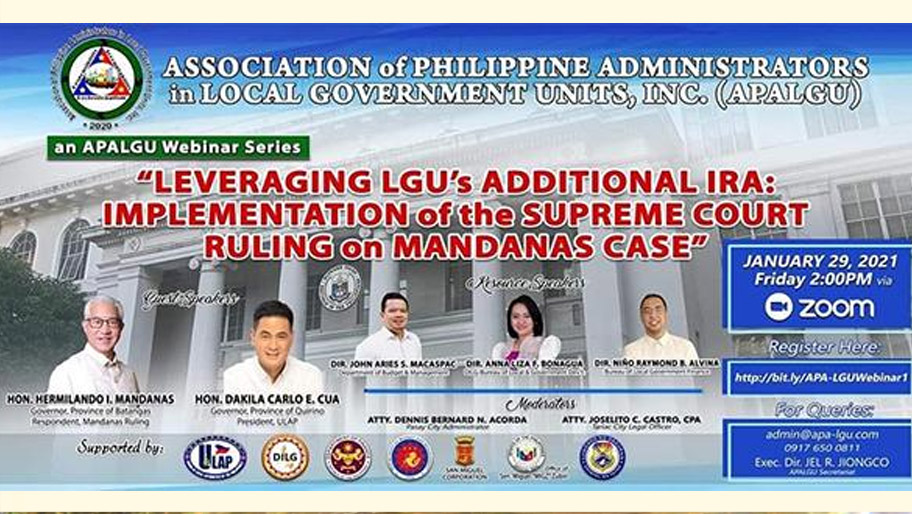 BATANGAS governor Hermilando I. Mandanas and other local chief executives express optimism that the landmark decision of the Supreme Court providing for the allocation of just share to local government units (LGUs) of the national taxes be implemented soon.

This developed as the League of Provinces of the Philippines (LPP) adopted in its general assembly Resolution 2021-003 expressing its official position and proposed amendments for the enhancement of a proposed Executive Order entitled “Directing the Full Devolution of certain functions of the Executive Branch to Local Governments.”

The LPP resolution is seeking a “smooth implementation” of the Supreme Court decision also known as Mandanas Ruling which provides for the expanded coverage and basis of ‘just share of LGUs’ in the national taxes collected by the LGUs under the National Tax Allotment (NTA).

The LPP resolution is but another addition to the growing clamor of regional development councils (RDCs) for the issuance of the Executive Order (EO) by the President to finally operationalize the SC decision. This will direct the preparation of transition plans of concerned national agencies and identification of programs and projects to be devolved to LGUs.

The Mandanas Doctrine resulted from the petition made by Batangas Governor Hermilando Mandanas and former Bataan Governor Enrique Garcia Jr. before the Supreme Court on local government shares on internal revenue allotment (IRA).

Accordingly, the tax base for computing the just share of the LGUs shall also include tariff and customs duties collected by the Bureau of Customs, value-added taxes, national taxes collected from the exploitation and development of the national wealth, excise taxes collected from locally manufactured Virginia-type cigarettes and other tobacco products, and franchise taxes, among others.

When fully implemented, the ruling will provide for a just and equal share of LGUS in the national taxes and will translate into more services to the localities.| – BNN