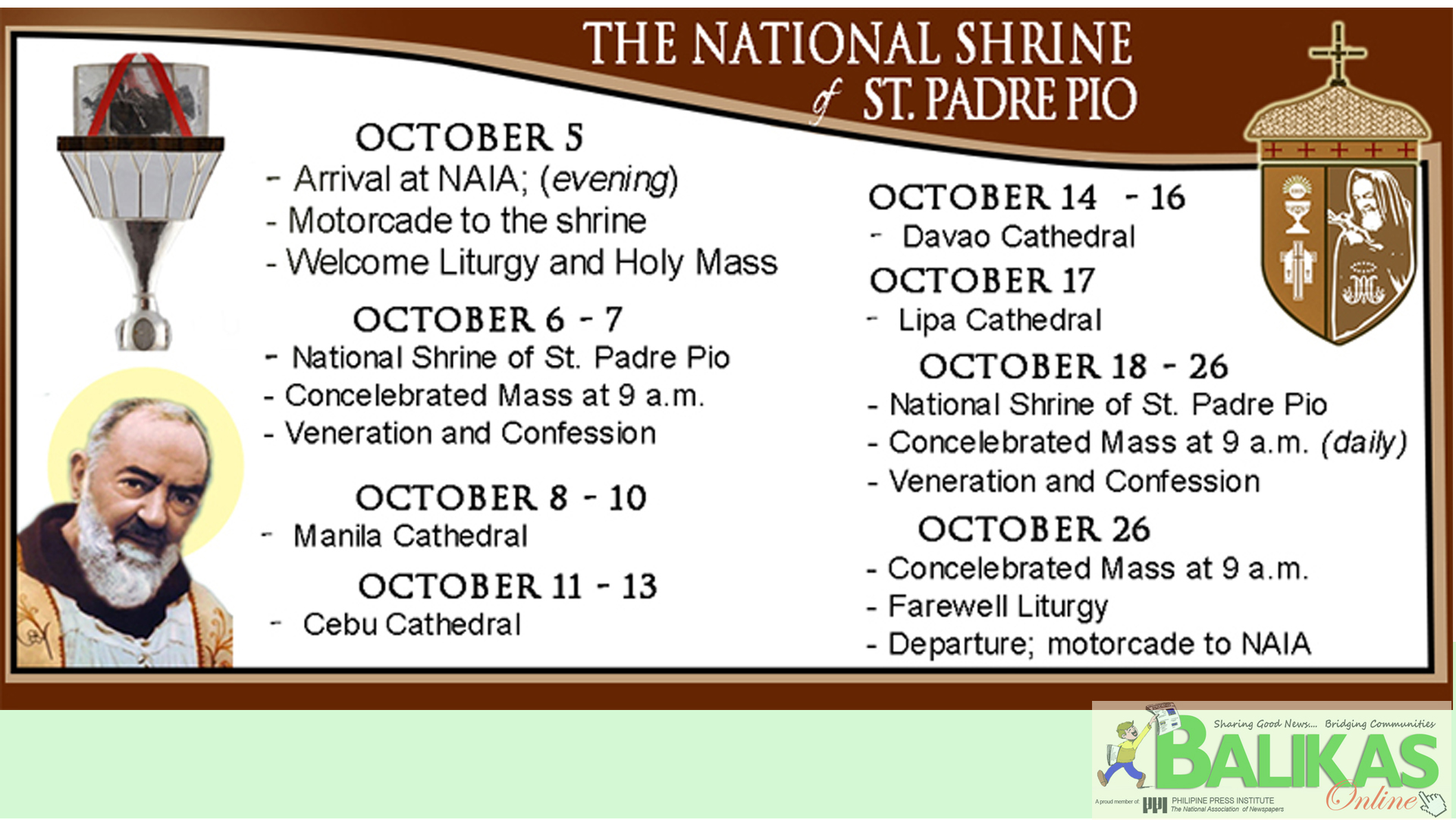 THE incorrupt heart of the famed St. Padre Pio of Pietrelcina is coming to the Philippines and would stay from October 5 till October 26, 2018.

This historic visit is made possible through the initiative of The Archdiocese of Lipa, headed by Archbishop Gilbert Garcera and Fr. Joselin “Jojo” Gonda, Rector of the National Shrine of St. Padre Pio, located at Brgy. San Pedro, Sto. Tomas, Batangas, in collaboration with the Episcopal Commission on the Clergy of the CBCP (Catholic Bishops’ Conference of the Philippines), headed by Bishop Buenaventura “Ben” Famadico of San Pablo Diocese.

“This year will mark two milestones in St. Padre Pio’s life.  First, on September 20, we will commemorate the Centennial (100 years) of Padre Pio’s receiving the stigmata (the five wounds of Jesus).  Second, we will celebrate his golden death anniversary (5o years) on September 23,” explained Fr. Jojo Gonda when asked why he thought of inviting the heart relic to the National Shrine.

“The visit of the heart relic is a fitting epilogue to these two important events in the life of St. Padre Pio,” Fr. Gonda said.  “Besides, it is the Year of the Clergy and the Consecrated Persons. Padre Pio,  given as a role model for them, can be an inspiration and challenge to us to have a heart like his, close to the Eucharistic and forgiving heart like the Lord.”

It is for this reason that the forthcoming visit of the incorrupt heart of this saintly priest who died in 1968 at San Giovanni Rotondo in Foggia, Italy where he spent his entire life as a Capuchin friar,  will be more significant. The Philippines will only be the fourth country to be visited by this heart relic.  Others include the United States, Paraguay and Argentina.

“This will also be a ‘time of grace’ for the Filipinos, especially the devotees of Padre Pio, who are now walloping in near hopelessness during these uncertain times of our nation’s history,” added Fr. Gonda.

In the meantime, Archbishop Gilbert A. Garcera of the Archdiocese of Lipa has expressed his approval of the detailed plans of the visit, especially during its stay at the Shrine of St. Padre Pio, declared National Shrine by CBCP in 2015. The Shrine has been attracting thousands of pilgrims ever since, especially during Holy Week and every 23rd of each month, declared as Special Day for Padre Pio when they have healing Mass and Liturgy.

“This is the only heart relic of St. Padre Pio,” explained Fr. Gonda in light of  recent visits of authentic first class relics of the saint that have made rounds In the different parts of the country. He said that these have confused some devotees thinking that the heart relic is already here.

“Yes, they are first class relics of the Saint, but the heart relic – which is just one – is still coming this October.  A contingent of devotees from the National Shrine will fly to Italy a week  before to fetch and accompany the precarious relic to the Philippines.  We will be accompanied by two Capuchin friars to ensure the safety and orderliness of the visit of the heart relic to the different places in the country,” added Fr. Gonda,  Rector of the Shrine and parish priest at the same time for 9 years already.