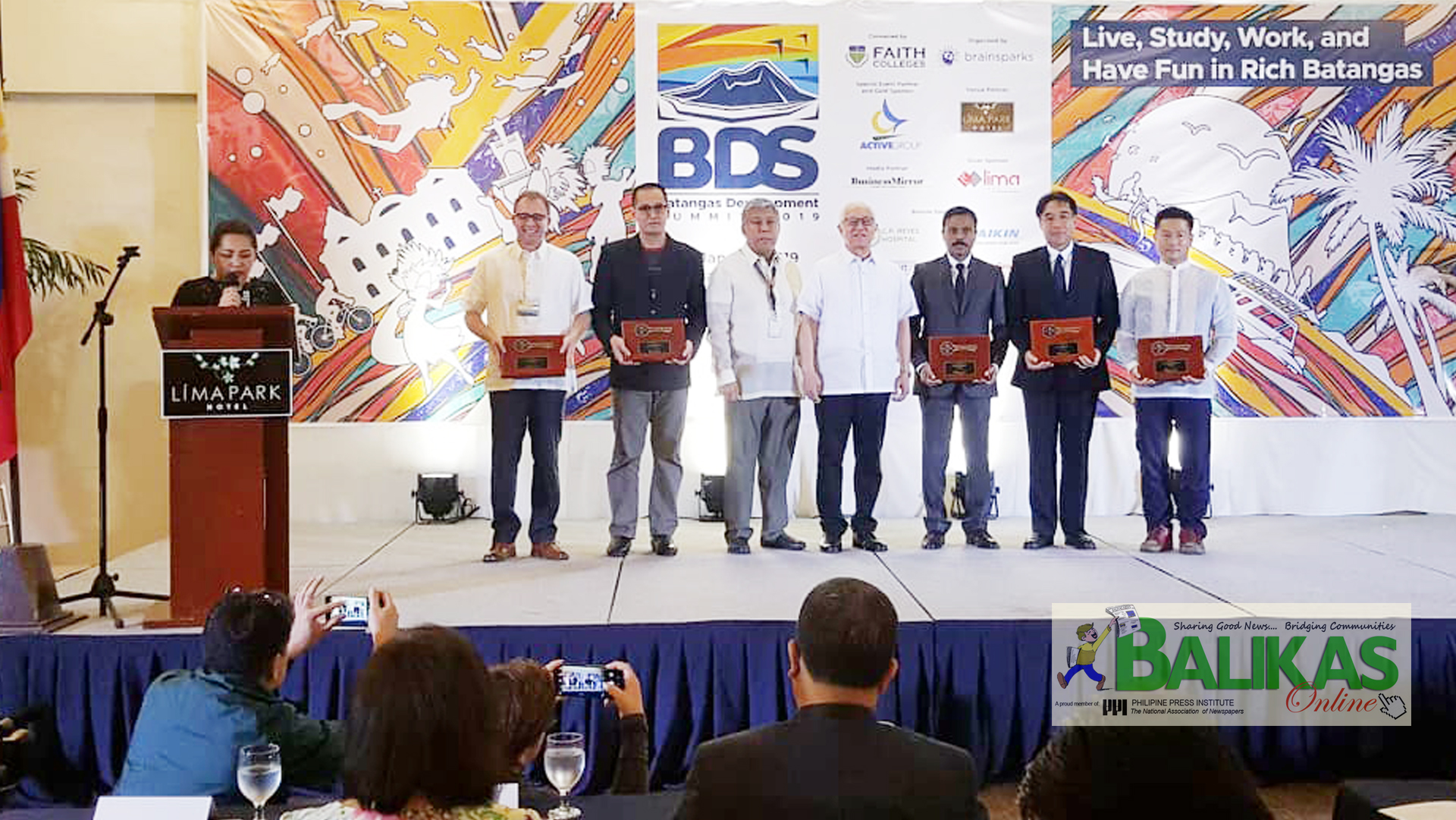 INVESTMENT, city living, and getting the best education can be best done here in the CALABARZON region, particularly in Batangas province, rather than braving the traffic woes and all the risks and challenges of trying hard to penetrate the imperial Manila.

Last Friday, convenors of the Batangas Development Summit in partnership with the provincial government of Batangas, has pooled together the stakeholders, possible investors and the public in Lima Hotel in Malvar, Batangas under the slogan “Live, Study, Work, Pay in Rich Batangas.”

Now on its 11th run, the Batangas Development Summit is the only conference of its kind in the province that serves as a venue for people to engage and create a network with decision-makers and executives from the government and business sectors of Batangas.

Every year, the Summit welcomes more than 500 participants from the government, the academe, and the business sector. It has become the best venue to discover the vast potentials of the province. In 2018, the Summit focused on the bright areas in business, education, and tourism. This year, the Summit focused on how to achieve and sustain inclusive growth, highlighting contributions, plans, and progras for the sustainable development of Batangas by both the private and public sectors. The Summit also focused on how businesses are investing to create long term sustainable impact.

The province of batangas has emerged and continues to progress as a focal point of development among local economies, alongside the country’s high economic growth with a GDP of 6.4% during the first quarter of 2017.

Notable speakers and presenters engaged the participants in a worthwhile discussion in various topics and disciplines. Ruth Novales, vice president of Nestle Philippines, who shares the coffee production advocacy of the food and beverage giant. The company has a vast track of lands planted with coffee and maintains their Philippine factory in Lipa City. Not just an alternative, Jose Omar L. Mercado, president of MERLO Group of Companies, has also presented a similar co-production program for coffee growers in the province and advocates the drive to regain the golden days of Lipa as the coffee capital of the country. Mercado shares the colorful history of the province with respect to coffee production and how did his family venture on Kapeng Barako.

Architect Antonio V. Turalba Jr., president and CEO of the Active Group, who presents the investment incentive developments of properties in Lipa City and the towns of Balete and San Juan; while homegrown entrepreneur Michelle Fabie toured the conference participants via her presentation on the aesthetical venturing of her companies, Prism and Antara corporations, in realty, and hotel and restaurant business.

Key to the Province of Batangas

Batangas governor Hermilando I. Mandanas also delivered his keynote address, followed by the awarding of the Key to the Province of Batangas to foreign nationals and select Filipino leaders with presence in and exemplary impact to the province of Batangas.

The Key to the Province of Batangas was first awarded during the Batangas Development Summit held on Jan. 27, 2017. It is a symbol of goodwill and appreciation for their support to the growth and development of the province.

The awardees are selected from the list of nominees presented by our reputable partners such as the Semi-conductors and Electronic Industries in the Philippines Foundation, Inc. (SEIPI), Batangas Provincial Tourism Council, Batangas Provincial Investment Council, the First Philippine Industrial Park, Light Industry and Science Park, Science Park of the Philippines, and Lima Technology Center, among others. Faith Colleges has been tasked by the OPG to assist in the shortlisting of potential recipients, as well as organizing the awarding.

Governor Mandanas again awarded the Key to select individuals in the field of business and industry who have largely generated jobs and promote the economy of the province. The awarding was the crown event of the 2019 BDS.