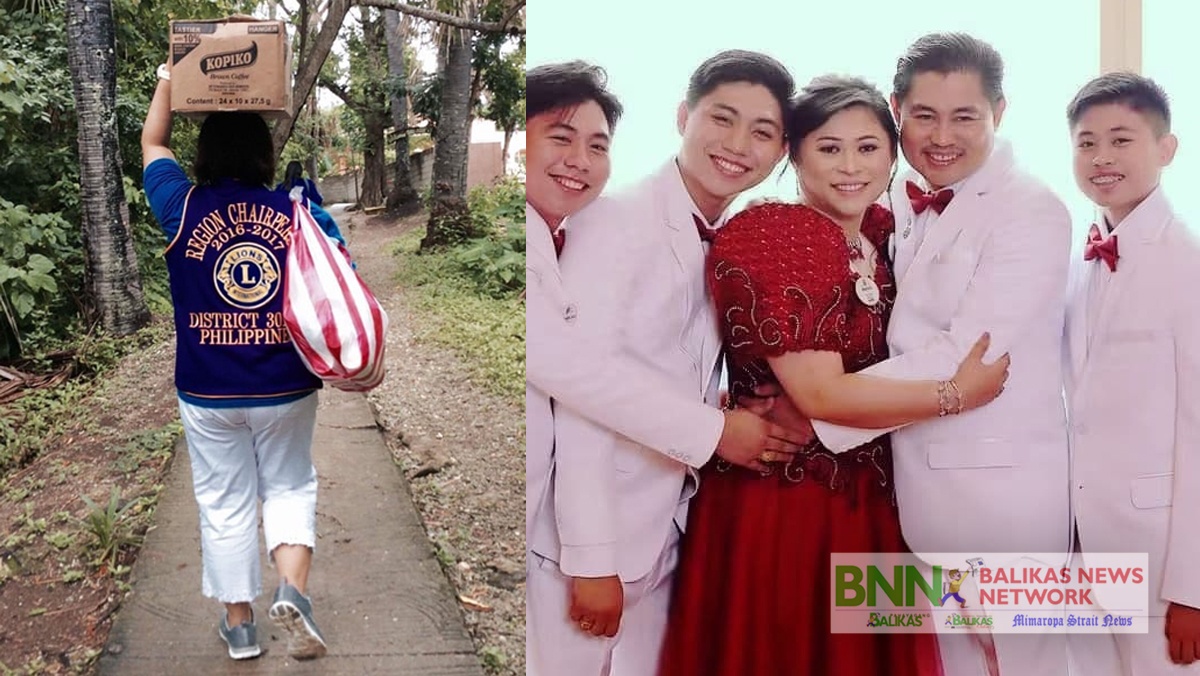 “SOMETIMES, things made on a rush may not be as ideal as those things that were well-planned and done well. But being on a rush may also mean quick response, especially in times of calamities and disasters when our services are most needed. It is the same RUSH (Respect, Understanding, Sincerity and Humility) that I consider as the core values and guide in all my endeavors — be it in all organizations I am involved in, in my business dealings, and in my family matters.”

Thus, this is how this powerful woman leader, known to many as Wennie Basa Bico intimated to BALIKAS News when this writer caught her attending an online class one Friday afternoon in her office at the D’ Mariner’s Hotel in Batangas City.

“My life is an open book to many. You can ask those who know me well, from among the members of different Lions Clubs, the group of realtors, and even our workers in the hotel and in the realty. I have high regard to these four values,” she added.

“The success in all our dealings is always gauged in our sincerity in dealing with our neighbor. In rendering our service, be it humanitarian or in professional aspect, we can only win our purpose and the participation of others if we are dedicated in what we are doing. Also, in dealing with people, we come across with different individuals with different characters, different beliefs, different educational attainments and different opinions. But we can win their heart if they will see in us that we know how to respect our differences and understand the individuality of each and every person.

Our “bida” in this week’s release of BALIKAS’ Silver Anniversary Special is no other than Lion Wennie Basa Bico, 9PMJF, the immediate past district governor (IPDG) of Lions Club International District 301-A2 Philippines.
A very determined, hard-working and humble woman, IPDG Wennie is a dedicated Lion committed to serve, together with her entire family.

A Career Woman on Her Own Right

She is a Florence Nightingale herself having earned her degree in Nursing and Midwifery, although she make a name and become too successful in the world of realty. By profession, she is a multi-awarded Real Estate Broker for more than two decades now, having started brokering in 1995 and as developer since 2013 to date.

When we visit her for this interview, we find her attending a virtual classes as she’s currently taking up Masters in Business Administration (MBA) at the Philippine Christian University in Manila.

By sheer hard work and positive outlook of life, she has earned herself success in business. She is a “hands on” person on almost anything and sees to it that whatever she does, she will do it with full determination and achieve exemplary results. She is basically what you call a “people person.”

She loves being around people and when she sees poverty and disease stricken people, her heart breaks, maybe because as we’ve said, she is a Florence Nightingale. She is a real bundle of energy that at times one wonders how she copes up with being a wife, a mother, a businesswoman, a Lion Leader and a friend to many. She together with her husband and kids are all involved in their business.

At an early age, her kids were exposed and trained to do work in their various businesses such as: Mariners Inn Hotel, BicotelsHotel, La Sail Construction Supply, and the latest of all their businesses is the 3D Batangas Lomi and Bulalo House.

The superwoman that Wennie Bico now is, is just like other known personalities with humble beginnings.

Born on January 9, 1973 in Negros Occidental, Maam Wennie finished her elementary education at Tagukon Elementary School in Negros Occ. Fate and her family’s search for a living brought them to Occidental Mindoro where she earned her high school diploma at San Jose National & Industrial School as 3rd Honorable Mention & Homemaker of the Year.

In 1992, she finished Midwifery course at the Golden Gate Colleges in Batangas City and passed the Licensure Exam the following year. She did not stop there. She took Bachelor of Science in Nursing in the same college in 2000.

Her innate urge to help her siblings while working at the Golden Gate General Hospital landed her in the realty industry, that in year 2004, she took and passed the Real Estate Broker Board Examination.

Doing business right brings her and her family to where they are now. But what she and her family love most is doing humanitarian service to help the marginalized sector of our society. She joined the Lions Club International (LCI) on September 1, 2006.

“My goal is to deepen and heighten the current principles of Lion Service, having as my thrust to reinforce it into a brand whereby the primary concern is to give the utmost sincere attention to its beneficiaries, and to promote Lions Service all over our district’s area of jurisdiction,” she said in filing her candidacy.

During her term as District Governor, she has set an insur-mountable record on Service Activities placing District 301-A2 in a #1 position in the Multiple District (MD) 301 Philippines.

Her fellow Lions will roar intently in District 301-A2 growling with conviction and elation seeing them having fun in doing humanita-rian service.

Lion Wennie has the distinction of being the first member of Batangas Crown MJF Lions Club to be elected District Governor, and the first Lady District Governor of Lions Club International (LCI) in Batangas, the highest position in Lionism. LCI District 301-A2 Philippines covers the cities of Makati, Pasay, Muntinlupa and Las Piñas in Metro Manila, the provinces of the CALABARZON, MIMAROPA, and Bicol Regions.

On the 6th year of Lionism, on June 25, 2012, Maam Wennie, was joined in the LCI by her husband Lion Rodante R. Bico, 2PMJF. Both of them served as presidents of the Batangas Crown MJF Lions Club.

Their children are all Leos and leaders in their own right – Danniel Kyle, 22 years old, is a graduate of Hotel & Restaurant Management at the De La Salle College of St. Benilde, Taft Ave, Manila. He is the Immediate Past MD 301 Philippines MJF Leo President. Dan Wein Kim, 19, started taking up Civil Engineering at De La Salle University in Manila but has moved closer to home at the University of Batangas to continue his studies. He is the Charter President of the Batangas Crown Leo Club. And is now MD 301 Philippines MJF Leo President. And the youngest, Dan Kristian, a Junior High School student at Casa Del Bambino Emmanuel Montessori is the Immediate Past President of Batangas Crown MJF Leo Club.

The Bico family has served countless souls, feed thousands of people, and planted hundreds of trees – humanitarian services that are inspired of their attendance to series of LCI Conventions here and abroad, also earning them nume-rous awards and countless accolades.

“But, we see to it that our feet should remain on the ground. We find happiness in service, with all due respect, understanding, and sincerity and humility,” Lion Wennie quipped with a smile.|-BNN