Lipa archbishop intubated due to CoVid-19 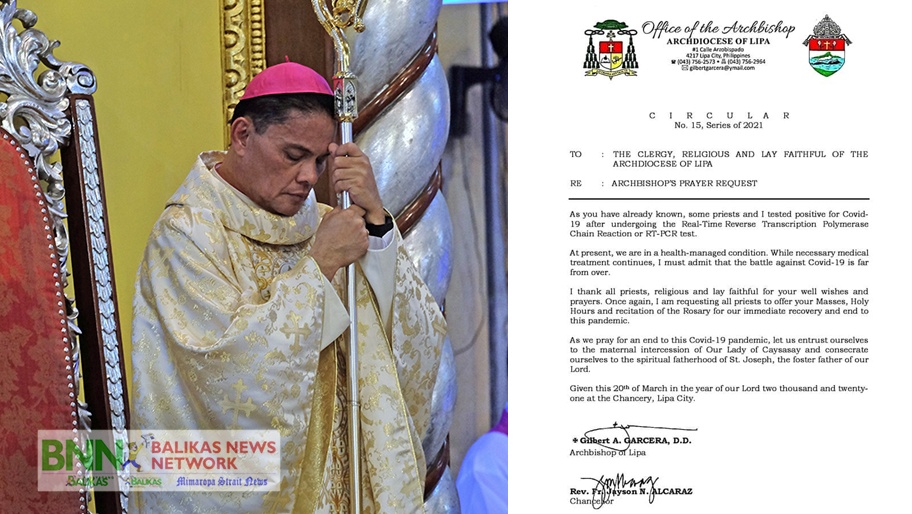 CITY OF DASMARIÑAS, Cavite — THE CoVid-19 response team of De La Salle University Medical Center in this city has transferred to the intensive care unit (ICU) his excellency, Gilbert Garcera, D.D., Sunday morning for more intensive attention, rest and care from the team of medical professionals.

Last Sunday, Reverend Monsignor Ruben Dimaculangan, vicar general of the Archdiocese of Lipa and rector of St. Sebastian Cathedral in Lipa City, broke his silence and gave a picture of the prelate’s health condition “to avoid a repeat of conjectures and misrepresentations created by lack of available information and access to the real situation”.

Monsignor Dimaculangan said that Archbishop Garcera was initially admitted in a “ward” of the De La Salle Medical and Health Sciences Institute until Sunday morning, 21 March 2021, because every room in the hospital was filled up. It was a newly opened VIP space that accommodated only the Archbishop, the Rev. Fr. Jazz Siapco, Doctor-Sr. Analiza Balita, MCSH, and Archbishop’s niece, Dra. Darlene Kay Garcera.

He added that the De La Salle hospital was the chosen institution because the two medical doctors attending to the prelate’s health conditions were alumnae of the same medical school.  “Both doctors would be able to stay behind to closely monitor every step during the whole course of the archbishop’s hospitalization”, the statement reads.

The vicar general also confirmed that Archbishop Garcera was intubated in order to save him from what could have been worse, thus, it was the best procedure believed to bring him back to normalcy the soonest. It was through this procedure that other medicine intake could be introduced, like cleaning of the blood. Meanwhile, he is aware, conscious and stable as of the latest available bulletin Sunday noon.

Who could have contacted the virus?

Msgr. Dimaculangan confirmed that a Church donor identified as the late Ethel Olave did come in the Archbishop’s Official Residence on 3 March 2021, together with Frs. Jazz Siapco and Dale Barreto Kho.

But it was cleared that the visit was not a social function but for the parties to finalize the signature on the donation of the land awarded to the Parish of St. Joseph, daughter-parish of Sto. Niño Parish, in Barangay Marawoy, Lipa City.

“Even if it were true that the late Ethel Olave’s visit at the Residence had been contributive to the sickness of the archbishop and his immediate companions, the Archdiocese, in light of charity, does not in any way impute any blame on whomever was the origin of the disease much that everybody did his best to observe the proper medical protocol and the visit’s intent was for the supposed donation to a new parish,” the monsignor added.

The local church authorities has also communicated to Fr. Jerome Cecillano, Secretary General of the Catholic Bishops Conference of the Philippines (CBCP) and the Apostolic Nunciature the real score on the health conditions of the archbishop and has established communication lines with the archbishop’s focal person of his family circle (Gener Garcera, youngest of the siblings).

Archbishop Garcera is the tenth Filipino prelate to contract the disease.

In a statement issued on March 20, the archbishop thanked the faithful for their well wishes and asked them to continue praying for their healing and for an end to the pandemic.| – BNN