BALAYAN, Batangas — A supposed buy bust operation has ended up with the death of the subject individual and the arrest of his live-in partner in Brgy. Durungao, this town, last Thursday.

Investigators said PO3 Nelson Quinag acted as posuer buyer and was able to acquire two (2) pieces of heat sealed transparent plastic sachet of suspected shabu from Lorenzo Marquez Vizconde. During the transaction at his residence, the suspect sense that he was transacting with a police officer. The suspect draw his short firearm tucked in his waist and shot the lawman but missed. PO3 Nelson T. Quinag and his partner PO3 Andy Mosquite were forced to retaliate and shot the suspect. 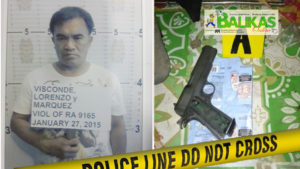 Sustaining fatal wounds, the suspect was rushed to Balayan Bayview Hospital and Medical Center for medical treatment but was declared dead on arrival by his attending physician, Dr. Ramon Sixto Castillo.

On the other hand, the suspect’s live in-partner identified as Manilyn Robles Godes, 25 years old, jobless and resident of San Jose, San Fernando Pampanga, was arrested for conniving with Vizcon-de in selling illegal drugs; Manilyn, who was also present during the transaction, was instructed by Vizconde to get the item inside their house. However, while she was inside the house, the firefight ensued.

Vizconde was previously arrested during the implementation of Search Warrant on January 27, 2015. He was also arrested during a buy bust operation on October 3,2015 and eventually released after availing Plea Bargaining on 2018.

The suspect is also a member of Mamayog Drug Group operating in the 1st District of Batangas.|#BALIKAS_News

TAKE a break from your school or work routine by taking the artistic route online with the first SM Stationery Virtual Art Fest 2021 every weekend of April and May.  Celebrate your creativity and passion online as this year’s Art Fest showcases traditional arts like brush calligraphy, watercolor and abstract painting; as well as contemporary […]

AboitizPower’s Integrated Response and Awareness towards COVID-19 Hazards (I-REACH) program bagged the Award of Excellence at the recently held Philippine Quill Awards, the country’s most distinguished awards program in the field of business communication. During the virtual awarding ceremony on March 25, the International Association of Business Communicators (IABC) honored the winners of the 18th […]

By JOENALD MEDINA RAYOS BATANGAS City – THE people of this capital city of Batangas is grieving for the loss of its longest serving chief executive, former City mayor Eduardo Berberabe Dimacuha at the age of 78. “Our Dad, EDUARDO B. DIMACUHA, former Batangas City Mayor, joined His Creator this morning, 4 April 2021, Easter […]

SHOPPING at Miniso is made more accessible and convenient with new their official Philippine website – shop.minisoph.com – which also features their newest Disney Mickey and Friends collection. Miniso’s cute and affordable finds – essentials, home living, health and beauty, bags and digital accessories, toys, or stationery and gifts – are now a few clicks […]