Mayor urges the public, join Earth Hour and communicate it to the world 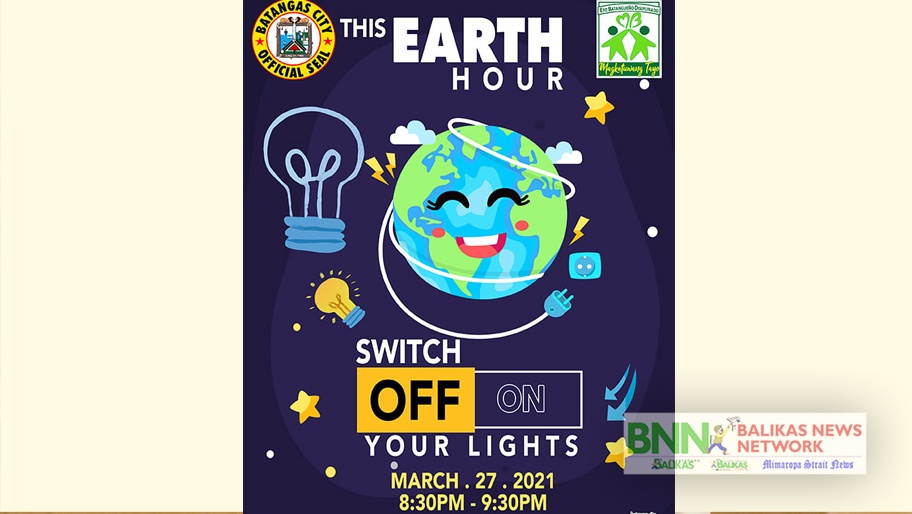 BATANGAS City will actively participate in the observance of the Earth Hour 2021 on Saturday, March 27, with the city government spearheading the activity amidst the challenges brought out by the corona virus pandemic.

“I am encouraging all sectors to increase awareness and spark global conversation on protecting nature not only to combat the climate crisis, but to ensure our own health, happiness, prosperity and even survival. Let’s take our personal accountability for our climate impact through this year’s earth Hour and show our support by switching off our lights for an hour from 8:30PM to 9:30PM at the convenient of our home, workplaces and other facilities,” Mayor Beverly Rose A. Dimacuha said.

With the passing and approval of the Batangas City Local Climate Change Action Plan (LCCAP) on May 16, 2017, Batangas City commits to target 25% emission reduction on a business as usual (BAU) scenario. Thus, the City’s participation in this global campaign will not only support our nation’s commitment to target 70% emission reduction by 2030 but at the same time, will symbolize every Batangueños action against climate change.

In October 2020, Batangas City has been hailed as the World’s Most Lovable City and overall winner in last year’s edition of the World Wide Fund for Nature’s (WWF) We Love Cities campaign.

The We Love Cities Campaign, which has empowered the general public globally with the opportunity to celebrate, vote, and upgrade their city through suggestions made and addressed to decision-makers, is interwoven with the One Planet City Challenge (OPCC)—a biennial global challenge organized by WWF to guide cities towards the most effective climate action, while publicly recognizing the most ambitious cities as leaders in the field of sustainable urban development.

In the observance of the Earth Hour, Dimacuha also encourage the public to document each other’s participation in the activity and send them to the City Environment and Natural Resources Office (City ENRO) who will submit the same to the WWF. Everyone is encouraged too to use #ClimateChangetoSaveEarth to publicly promote renewed ways and or practices of initiating change for global climate.

In addition to recognizing the importance of public engagement in achieving sustainability goals, Batangas City aims to be the first carbon-neutral city in the country by 2030, thus, the development of a comprehensive climate mitigation and adaptation plan to realize this vision.|