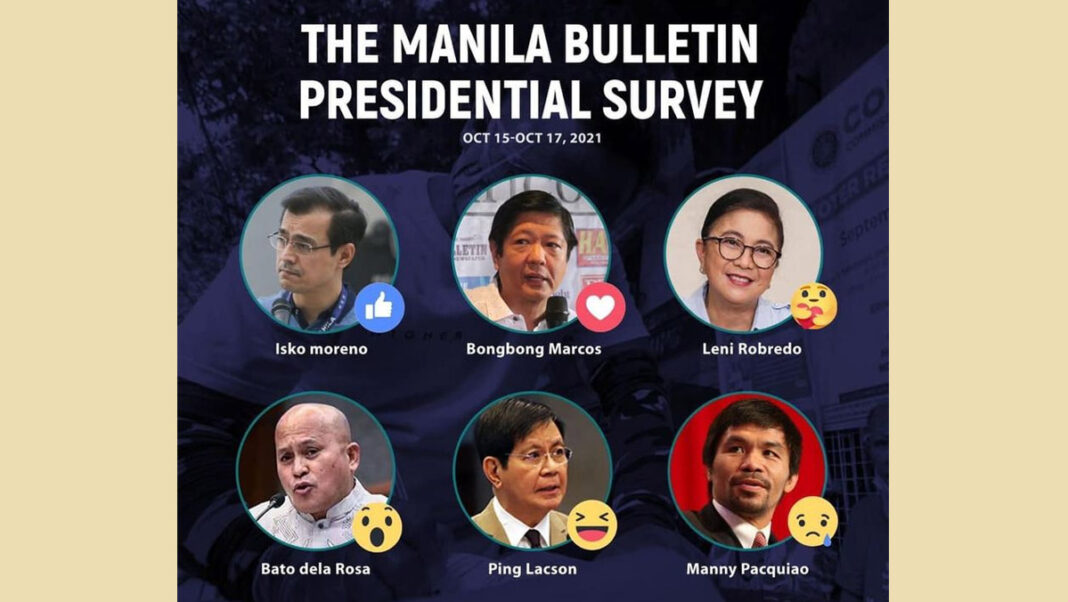 DESPITE the orchestrated barrage of criticisms hurled against him, Presidential aspirant Ferdinand ‘Bongbong’ Marcos, Jr. may end up winning the 2022 elections via landslide according to the results of an online survey published by one of the country’s leading newspapers.

The Facebook poll racked up over 800,000 reactions from netizens who were asked to vote by using the assigned emoji for their preferred candidates.

The Manila Bulletin also ran a parallel survey on its Twitter and officials website where Robredo won against Marcos by a very slim margin. However, the number of respondents in the website and Twitter polls were much smaller than those seen in the Facebook survey.

Although similar in design with Rappler’s ill-fated online poll, Manila Bulletin’s version was well-received by netizens. Rappler earlier took down their online survey amid questions raised by netizens who noticed a slew of foreign-sounding names as among those voting for Robredo.

Marcos appealed to his followers and supporters on Monday to end the hate campaign against Rappler saying that it should be given “another chance to find honesty in their heart”.

The Manila Bulletin also assured the public that the survey will not be taken down and that it is only doing the survey to gauge the sentiment of their readers on their online platforms. It also added that they will be conducting the online survey every month.| – BNN