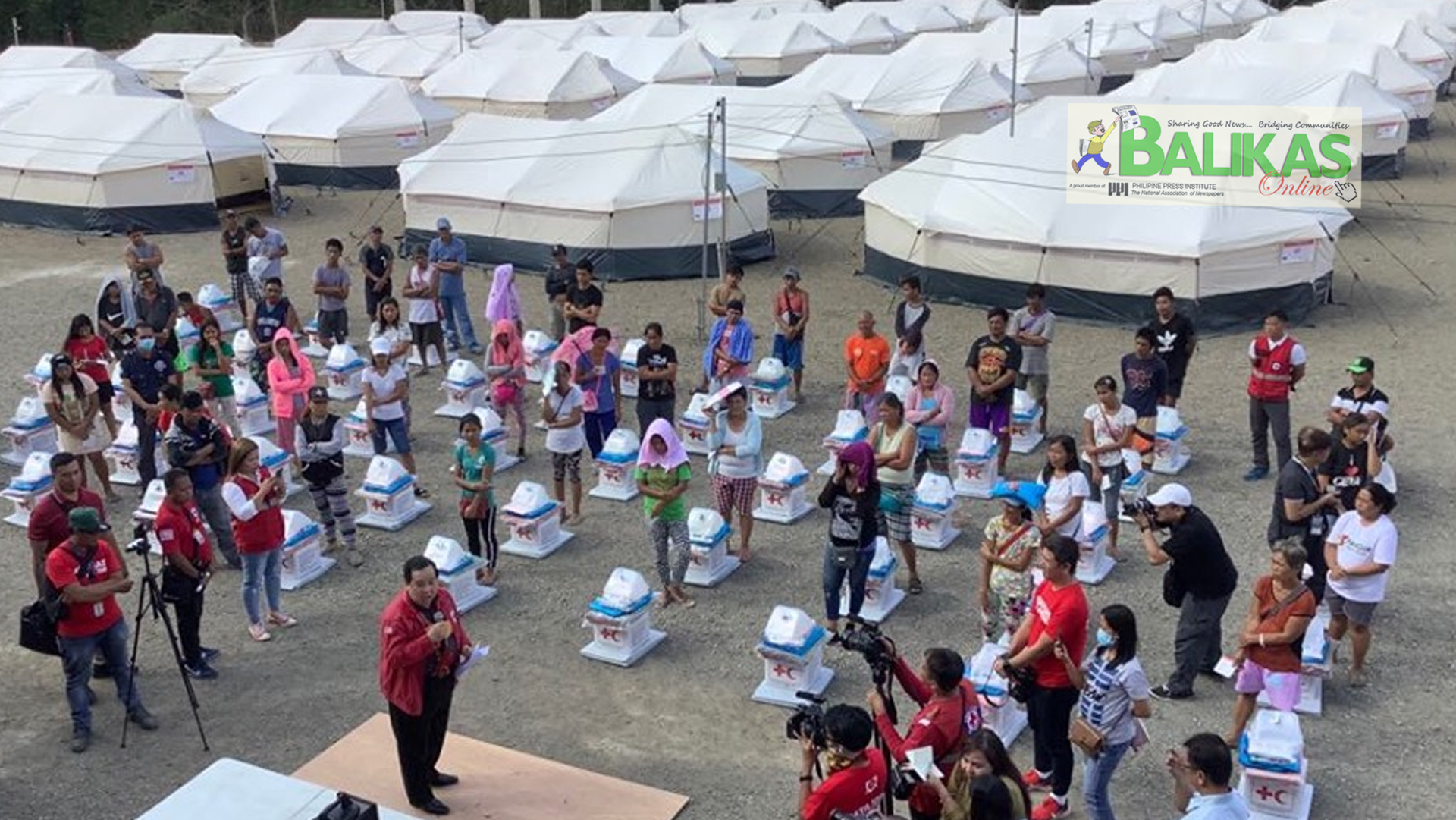 IBAAN, Batangas — “WE can only do this big, with your cooperation. Sabi nga, nasa Diyos ang awa, nasa tao ang gawa. So what we have to do is rise up, and volunteer, and we will succeed.”

Thus, Senator Richard Gordon, the chairman and CEO of Philippine Red Cross quips as he ushered the opening of the Tent City that the PRC constructs in partnership with the Provincial Government of Batangas in Barangay Malainin, Ibaan town, Saturday afternoon.

“With these family tents, our evacuees can sleep with privacy. Although we will also have to set up community kitchen for orderly cooking of their food or Rubb halls which will serve as their dining areas,” Gordon further said as he inspects the tents with Batangas Governor Hermilando I. Mandanas.

Earlier, Gordon, said the PRC will go along with Mandanas’ plan to set up these tent cities where evacuees can stay until they can move back to their own homes.

Now, 48 of the 56 family tents are ready for occupancy at the grounds of the newly constructed Batangas Provincial Detention and Rehabilitation Center (BPDRC) which temporarily serves as Batangas Magiting Interim Evacuation Center. Each family tent stands on a well-leveled grounds, the floor lining of which has half-inch thick plywood to keep away from moist and morning dews from seeping in. The windows have woven nets to prevent insects from coming in while allows the air to freely enter. There are also ante-room area and provisions for storage at the rear area.

There is ample lighting inside the tent as the Provincial Engineer’s Office installed electric light system.

Among those who received the kits and to be sheltered in the tents are the families from the barangays around Taal Lake whose house are either partially or totally damaged and are currently occupying the  BPDRC building.

Governor Mandanas has to cancel his meeting in Manila to personally thank Chairman Gordon and the International Red Cross delegates.

“We are very indebted to the compassion and continuous help of the Philippine Red Cross and its international partners in this relief and rehabilitation effort for our victims of Taal Volcano eruption. The Red Cross has helped us much,” the governor said.

According to Gordon, there are already national societies committed to provide funding for the rehabilitation phase. This includes rehabilitating or building damaged houses, schools, and other buildings; providing livelihood, and distributing cash grants.

“We are already coordinating with our partner national societies to ensure that, like how we worked in Yolanda,” he said.

Earlier, the senator said that he is proposing to use portion of the money that Spanish Red Cross and German Red Cross will donate to build houses.

After the Phivolcs raised the alert status of Taal Volcano on January 12, the PRC immediately responded and International Federation of Red Cross and Red Crescent Societies then followed.

Said FRC then initially allocated the Disaster Relief Emergency Fund (DREF) of CHF 259,993 which was later on increased to CHF 498,602. The Spanish Red Cross is supporting the operation with funding received from ECHO, which complements the funding provided through the DREF.

Relief efforts include distribution of hygiene kits, provision for shelter and livelihood assistance, among others.

The major donors and partners of the DREF include the Red Cross Societies and governments of Belgium, Britain, Canada, Denmark, German, Ireland, Italy, Japan, Luxembourg, New Zealand, Norway, Republic of Korea, Spain, Sweden and Switzerland, as well as DG ECHO and Blizzard Entertainment, Mondelez International Foundation, and Fortive Corporation and other corporate and private donors.

“The government of the Republic of Korea has decided to provide $200,000 (around P10-million) in humanitarian assistance through the Philippine Red Cross to help about 45,000 people displaced by the eruption of the Philippines’ Taal Volcano that began on January 12,” Korea’s Ministry of Foreign Affairs said in a statement.

It added: “The assistance is expected to contribute to the stabilization of the lives of the displaced people by providing relief supplies in a speedy manner to people staying at shelters due to the volcanic eruption.”

South Korea has been providing assistance to the Philippines during times of disasters and natural calamities.

Also, exactly a month ago, the Singapore Red Cross Society (SRC) come to the aid of the PRC.

“Responding to the magmatic eruption of Taal Volcano that has affected large sections of Batangas Province and nearby areas in the Philippines, the Singapore Red Cross (SRC) will, in the first instance, contribute US$50,000 (S$67,400) towards the humanitarian relief efforts,” SRC statement said.

“The SRC will also launch a public fundraising appeal, and SRC’s contribution and all donations raised will go towards supporting relief and recovery operations mounted by the Philippine Red Cross (PRC),” it added.|- BALIKAS News Network