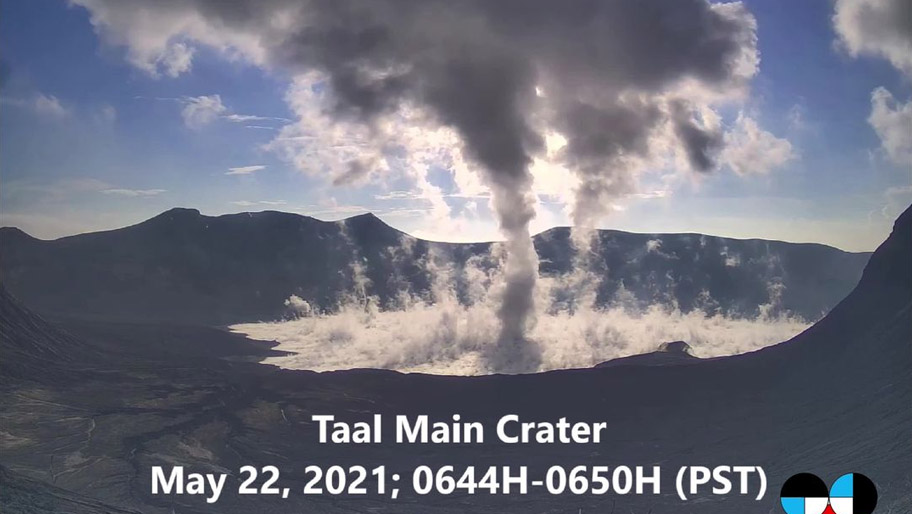 THE Philippine Institute of Volcanology and Seismology did not detect any volcanic earthquake with the Taal Volcano Network in the past 24-hours, however low-level background tremor persisted since 08 April 2021.

Activity at the Main Crater was dominated by upwelling of hot volcanic fluids in its lake which generated plumes that reached 1.5 kilometers tall before drifting to the north-northwest. This occurrence was also monitored by the bureau in the past 48 hours.

Although the sulfur dioxide (SO2) emission have relatively lowered at an average 2,811 tonnes/day on 22 May 2021 compared to the three preceding days, still the temperature at the Main Crater Lake is still high at 71.8°C and pH of 1.59 same as last measured respectively on 04 March and 12 February 2021.

Ground deformation parameters from electronic tilt, continuous GPS and InSAR monitoring continue to record a very slow and steady inflation and expansion of the Taal region that began after the January 2020 eruption. These parameters indicate persistent magmatic activity at shallow depths beneath the edifice.

DOST-PHIVOLCS still maintained an Alert Level 2 (Increased Unrest) over Taal Volcano; and reminds the public that at this level, sudden steam-driven or phreatic explosions, volcanic earthquakes, minor ashfall, and lethal accumulations or expulsions of volcanic gas can occur and threaten areas within and around TVI.

Entry into Taal Volcano Island, Taal’s Permanent Danger Zone or PDZ, especially the vicinities of the Main Crater and the Daang Kastila fissure, is strictly prohibited. Occupancy and boating on Taal Lake is highly discouraged.

Local government units are advised to continuously assess and strengthen the preparedness of previously evacuated barangays around Taal Lake in case of renewed unrest. Civil aviation authorities must advise pilots to avoid flying close to the volcano as airborne ash and ballistic fragments from sudden explosions and wind-remobilized ash may pose hazards to aircraft.|-BNN