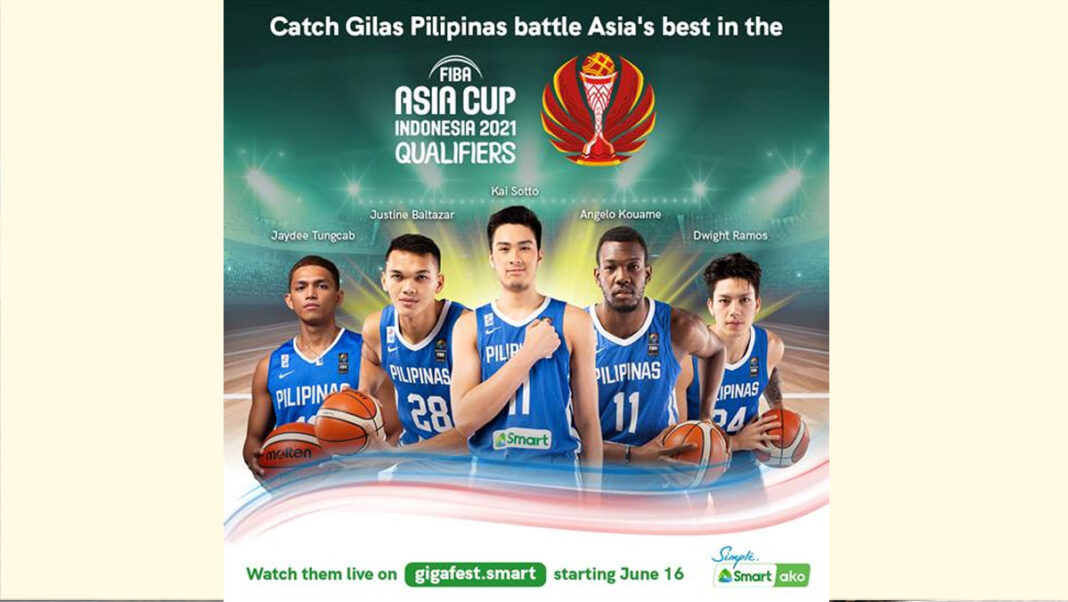 LEADING mobile services provider Smart Communications, Inc. brings high-stakes basketball action and the chance to rally behind our Gilas Pilipinas Men’s National Team right at the palm of your hands for this week’s leg of the 2021 FIBA Asia Qualifiers beginning June 12 at 9 pm, Philippine time.

Catch Iran go up against Qatar in the first game, Saturday at 9 pm, while Gilas debuts its 2021 lineup against familiar archrival South Korea on June 16 at 6 pm.

“Filipino basketball fans like myself have waited a long time for this, and we are just as excited to have international basketball in our country again. We know at Smart that physical homecourt support is still not possible at this time, but we can maximize our virtual homecourt advantage by rallying behind our national team online,” said Alfredo S. Panlilio, PLDT Inc. and Smart Communications President and CEO.

“We made sure that the game we all love makes it to the palm of every Smart subscriber’s hand. This, of course, is made more special because we finally get to see our very own Gilas Pilipinas play for flag on the world basketball stage once again,” added Panlilio, who is also the President of Samahang Basketbol ng Pilipinas (SBP).

The Philippine team will also face Indonesia on June 18 at 6 pm before it wraps up its FIBA Asia assignment for this window vs South Korea again on June 20 at 3 pm. Here’s the full schedule of the FIBA Asia Qualifiers to be streamed via gigafest.smart:

The games will be held at the Clark Bubble in Pampanga.

The Philippines currently leads Group A with a 3-0 record followed by Korea with 2-0, while Indonesia and Thailand are tied with 1-2 records each. Only two teams from each group will advance to the 2021 FIBA Asia Cup set in August to be hosted by Indonesia.

No matter where you are, you can catch the games live and on-demand on your Smart-powered device. If you are a Smart Prepaid subscriber, simply turn on your mobile data and visit gigafest.smart on your browser to watch the show.

For the best streaming experience, you can register to Double GIGA Video 99, which gives you 2 GB data every day for YouTube, Cignal, iWant, and NBA League Pass plus 2 GB of open access data, valid for 7 days. To register, just choose Double GIGA Video on the GigaLife App, or dial *123# on your smartphone.

Basketball fans can get the best streaming experience with Smart, the country’s fastest mobile data network as reported by third-party mobile internet analytics firms such as Ookla® and Opensignal.

On the other hand, Smart has scored a rare sweep in the April 2021 Philippines Mobile Network Experience Awards* by independent analytics firm Opensignal, beating the competition across all metrics in three essential aspects of service: Coverage (4G Coverage Experience, 4G Availability), Speed (Download and Upload Speed) and Experience (Games, Video and Voice App). This is the first time an operator in the Philippines won decisively in all categories.

Smart also enables subscribers to enjoy their favorite content seamlessly with Smart 5G, the fastest 5G network in the Philippines by Ookla. Based on consumer-initiated tests taken using Speedtest® by Ookla, Smart has consistently posted the fastest 5G speeds for Q1 2021, with median download speeds of 190 Mbps – more than double the competition’s speeds for the same period.

Fun and Fashion at The SM Store big clearance sale