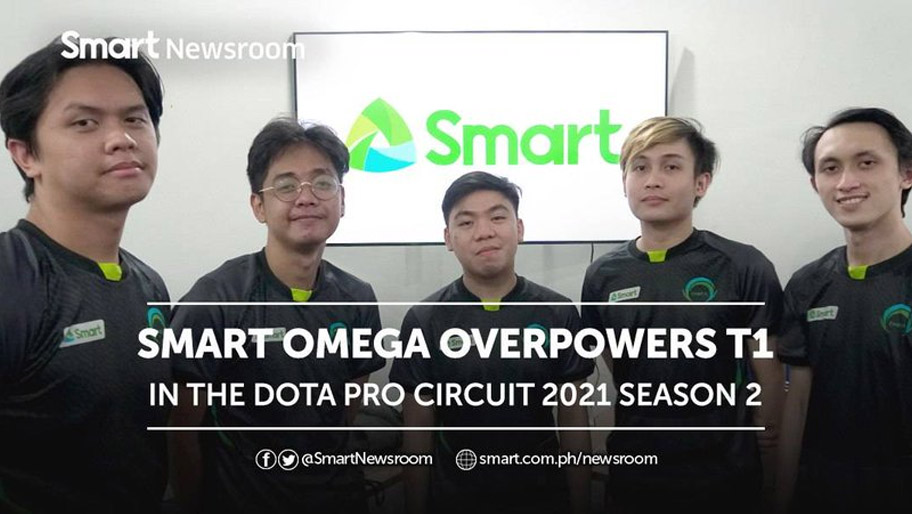 The Smart Omega DOTA 2 team has secured its first win in the said league, besting Mongolia’s Lilgun during its upper division debut — a step forward in their journey to qualify for the prestigious The International (TI) $40M tournament which will be held in Sweden this year. Smart Omega will face SK Telecom-backed T1 on April 17, 2021.

This comes on the heels of Smart Omega’s success at the PNXBET Invitationals Season 4, and Asian New Bloom Tournament, where they emerged as champions.
“We have always believed that our players have the skills, talent, and dedication to reach greater heights. We hope that the Smart Omega team can continue to be an inspiration to Filipino casual players and fans and help them realize and pursue their passion for esports,” said Jude Michael H. Turcuato, FVP and Head of Sports at Smart.

To further strengthen its DOTA 2 lineup, Smart Omega Esports welcomed The International veteran Sam “Sam_H” Hidalgo and high-ranking professional player Mark “Shanks” Redira to the team. They complete the DOTA 2 roster, which includes top-tier players Mc Nicholson “Mac” Villanueva, Bryle “cml” Alvizo, and Justin “Tino” Grimaldo in their bid to get a spot in the upper division of DPC.

Smart has also been leveraging partnerships to deliver esports content to its customers. Since 2017, Smart has been the exclusive mobile partner of Shanghai-based developer Moonton in leveling up the Mobile Legends experience of Filipinos. Smart is also the official telco partner in the latest season of Mobile Legends: Bang Bang Professional League (MPL), the Philippines’ largest mobile esports league; and the M2 Mobile Legends: Bang Bang World Championships in Singapore in January.

Smart has also partnered with several local and international esports organizers, including FIBA Esports, to support online tournaments and events to help boost the industry. Aside from these global partners, Smart also supports The Nationals, the Philippines’ first and only franchise-based esports league.

“We have over 43 million members of the esports community in the country, and we want to be able to empower them through our fastest network, and our products and services that enable their passion points. Smart, our parent company PLDT, and the rest of the MVP Group, are fully behind sports development in the country because we believe that sports plays an important role in nation-building,” said Jane J. Basas, Senior Vice President and Head of Consumer Wireless Business at Smart.

As a staunch esports advocate, Smart enables Filipino gamers to level up their gameplay and keep connected with their peers via their favorite games with Free Games For All. With it, subscribers get a solid 1 GB/day, plus free 1 GB/day more to enjoy Mobile Legends and other top mobile games.

Enabling this level of gaming experience is PLDT and Smart’s integrated fixed and wireless networks across the country. Smart’s mobile network, which has been cited by third-party analytics firm Ookla as the fastest mobile network in the Philippines, also serves 96% of the country’s population from Batanes to Tawi-Tawi.

Supporting these services is PLDT’s fiber infrastructure, the country’s most extensive at 429,000 kilometers.

These initiatives form a large part of PLDT’s capital expenditures, which totaled P460.7 billion in the last ten years.

To address the growing data needs of their fixed and wireless customers, PLDT and Smart are prepared to invest between P88 billion and P92 billion in capital expenditures in 2021.|