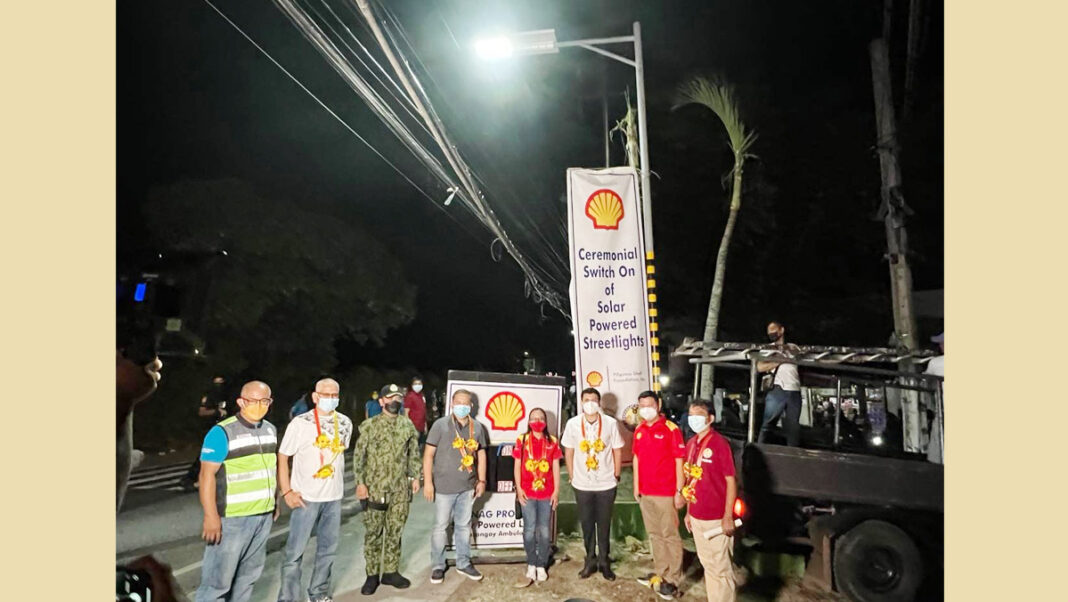 WHAT used to be another dark stretch of the Batangas-Tabangao-Lobo road is now lit up at night, thanks to the installation of another sets of solar-powered streetlights by Pilipinas Shell Petroleum Corp. (PSPC) under the Save, Invest and Nurture Access to Green Energy and Technology (SINAG) project of the Pilipinas Shell Foundation, Inc. (PSFI) and Shell Import Facilities (SHIFT).

Punongbarangay Mano-lo Macatangay of Brgy. Tabangao Ambulong said the installation of the new sets of solar-powered streetlights will surely help not only his constituents but more so, the number of motorists plying the Tabangao-Lobo Road.

Prior to the switching ceremony, Macatangay ang Punongbrangay Andres Malibiran of San Isidro, who heads Barangay San Isidro both signed a Memorandum of Understanding signifying their commitment to work hand and hand withe SHIFT and PSFI for more security and development concerns of their barangays.

“Shell is not only serious about road safety, but also about powering progress using cleaner energy solutions. In Tabangao, for example, we’ve set up a solar farm at the terminal, which produces enough electricity to power operational and residential needs inside the compound,” he added.

Laylo says police stationed at the San Isidro outpost located by the road lit up by the solar-powered streetlights since February of this year find it easier to maintain peace and order in the barangay at night.

Iniatially, the program installed 16 solar-powered lights. Now, at least 46 units have been installed and benefitted four (4) barangays for hte city.

Community volunteers underwent training last December on the monitoring and maintenance of the streetlights.|- BNN/jmrayos