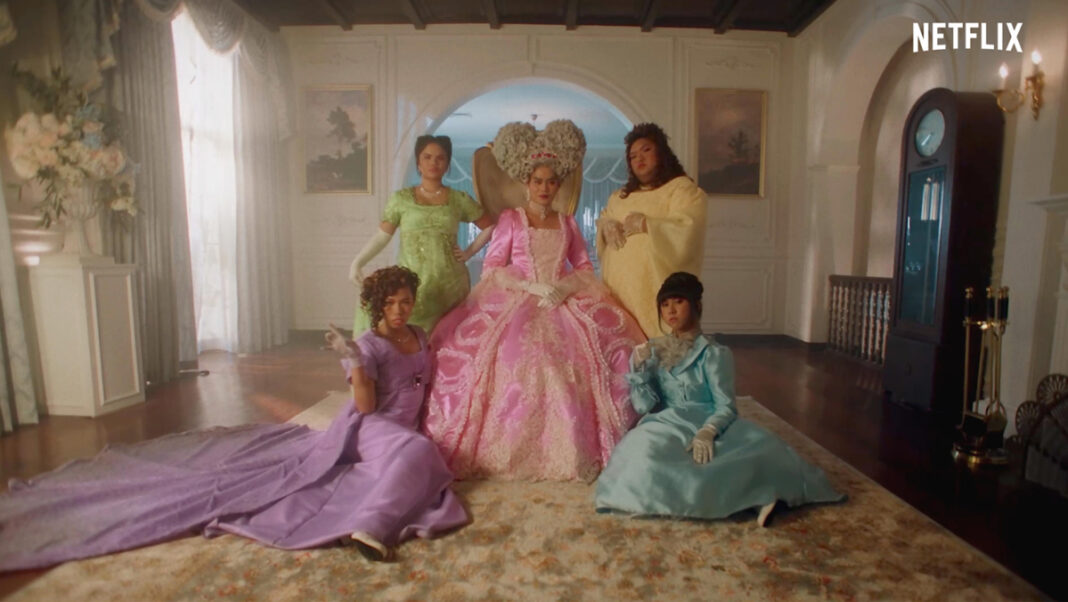 MANILA, PHILIPPINES – Netflix is inviting Filipinos to experience the British Regency Era through Villa Bridgerton, a mansion in Quezon City glammed up to give Bridgerton fans a glimpse into the grand and elegant world of the series. Bridgerton returns for a second season on the streaming service on March 25.

To give a sneak peek into the villa, TikTok Kweens Pipay (@pipaykipayy), Justine Luzares (@justine_luzares), Ychan Laurenz (@ychanlaurenz), Paula Pelaez (@its_me_paulapelaez) and GaiaPoly (@gaiapoly) transformed into British royalty in a high fashion crossover film shot at the villa itself.

In the video by Netflix Philippines, the personalities – dressed up in gorgeous Regency-inspired gowns (and with Justine as the Queen, complete with the big heart-shaped hair!) – pose around the villa, showing all the classiness that await esteemed guests: a romantic carriage ride, magnificent mansion, luxurious grounds to promenade in, a regal game of croquette, and beautiful string quartet music.

The top Tiktok creators, fans of the Netflix series themselves, gamely strutted in Bridgerton-eleganza inspired by the beloved Daphne and Eloise Bridgerton, Penelope Featherington, and the newest additions to the cast, Sharma sisters Kate and Edwina.

Villa Bridgerton, located at 35 Broadway Avenue, Corner 9th Street, New Manila, Quezon City (Google Maps here) is open to the public from March 25, 2022 to April 3, 2022. For more information and to book your free tour of the villa, visit villabridgerton.com.

From Shondaland and Creator Chris Van Dusen, the second season of Bridgerton follows Lord Anthony Bridgerton (Jonathan Bailey), the eldest Bridgerton sibling and Viscount, as he sets out to find a suitable wife. Driven by his duty to uphold the family name, Anthony’s search for a debutante who meets his impossible standards seems ill-fated until Kate (Simone Ashley) and her younger sister Edwina (Charithra Chandran) Sharma arrive from India. When Anthony begins to court Edwina, Kate discovers the true nature of his intentions — a true love match is not high on his priority list — and decides to do everything in her power to stop the union. But in doing so, Kate and Anthony’s verbal sparring matches only bring them closer together, complicating matters on both sides. Across Grosvenor Square, the Featheringtons must welcome the newest heir to their estate while Penelope (Nicola Coughlan) continues to navigate the ton whilst keeping her deepest secret from the people closest to her.