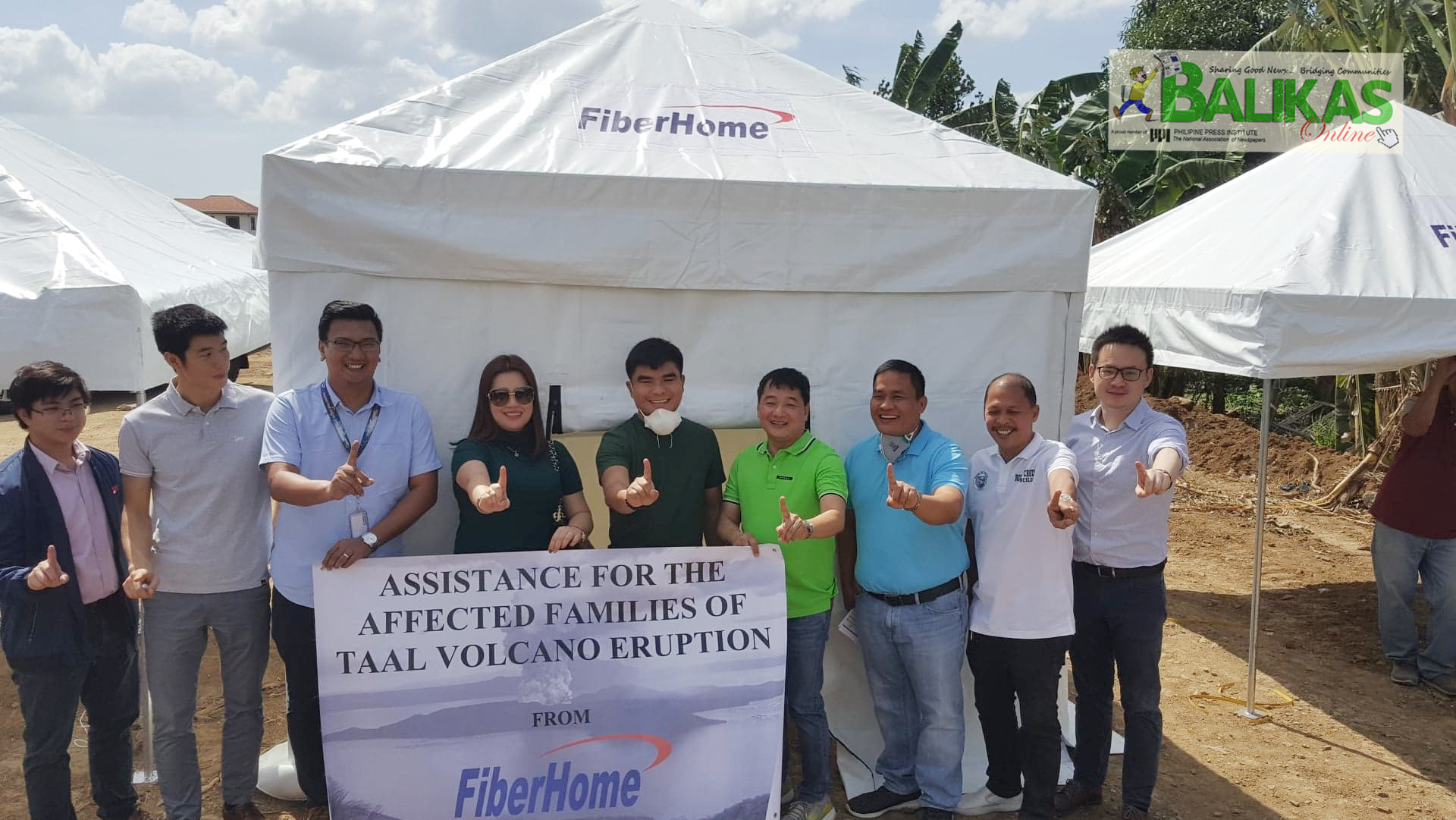 BAUAN, Batangas – WHILE the world’s attention is focused now on the spread of the deadly 2019 novel corona virus (NCOV), and many consider Wuhan City, the ground zero of the disease, as the most unwanted place, it is very ironic that a Wuhan-based company is now giving away assistance to the victims of taal volcano eruption.

“We are bringing in at least 10 sets of family tents now, and we are looking forward to install more units in the near future to help your kababayans find a safe and liveable temporary shelter during calamities,” said Suzette de Claro, Senior Account Manager of Fiberhome Networks.

Each tent can accommodate 5-6 members of the family, but the company will also install bigger tents for bigger families.

“While we cannot guarantee providing all the tents for the 2.5 hectare property, we are looking forward of at least developing a block of it,” John Andrew Martovillas added.

Fiberhome Networks is a major networking and telecommunication equipment provider in the People’s Republic of China with its headquarters in Hongshan District, Wuhan, Hubei province. It is a globally renowned information and communication network product and solution provider and is in contract with local telecommunication companies.

The company representatives, however, assured the public that there’s no reason to be bothered about this Wuhan-based company as there will be no parts of the tents will be shipped from Wuhan, neither any of the personnel visiting the evacuate site be from Wuhan, China. “All of us are here in the country for already a year now and our families are also here,” they said.

At least 10 tents will aso be installed in Agoncillo town, to which Mayor Daniel Reyes expressed gratitude to the company representatives.

Four days after the eruption of the volcano, Mayor Dolor publicly offered at the presence of top national and local officials led by Executive Secretary Salvador Medialdea that the portion of the property to be developed as an evacuation site where a tent city or a permanent evacuation center can be built to avoid the overcrowding of evacuees in school facilities that obviously affects the classes of students who are not affected by volcanic eruption.

“This is a 3.5 hectare property fully owned by the municipal government of Bauan, the 2.5 hectares is originally intended for socialized housing project and the other one hectare is for the expansion of Bauan Technical High School. This 2.5 hectare can accommodate around 10,000 evacuees at a given time,” Mayor Dolor said.

Prodded by Deputy Speaker and 2nd District Congressman Raneo E. Abu, the Chinese company started coordinating with Bauan mayor Rhyann M. Dolor and his men for the installation of the tents after Abu calls for the national government’s support and private sector’s partnership in developing the tent city.

“We are also coordinating with port operators and logistics companies for possible donation of used and recyclable container vans which we can arranged and welded to convert them into temporary shelters of evacuees,” Abu added.

Of the around 18,000 evacuues that find refuge in evacuation centers of Bauan, still around 4,000 individuals are still at the Bauan Technical High School to date.

Meanwhile, Mayor Dolor has also intimated to BALIKAS News that the Php 5-million assistance of the Office of the President handed by Medialdea will be iniatially used to develop the evacuation site.

“We cannot just used everything here, as the volcanic unrest is still ongoing, if and when evacuees came in and the site is not yet ready for occupancy, at least we have something to start with also, but we assure the public that all funds received by the municipal government will be solely devoted for calamity relief and rehabilitation,” he said.

As of press time, the Municipality of Bauan has also received P1-million from the Provincial Government of Bukidnon and half million pesos from the City Government of Pasig.

“Senator Sherwin Gatchalian and the City of Valenzuela also gave us P200,000.00 intended for buying rice. But since there are still stocks of rice, we may also ask them if that amount can also be included in the fund being apportioned to the evacuation site development. These are all donations for the relief and rehabilitation program and we will appropriating everything to the program. Kaya hindi na muna naming ginagalaw ang calamity fund ng aming bayan,” the mayor added.|- BALIKAS News Network