Bayanihan in the midst of a pandemic: The Coca-Cola Foundation, Coca-Cola Philippines contribute aid to Filipinos impacted by Super Typhoon Odette 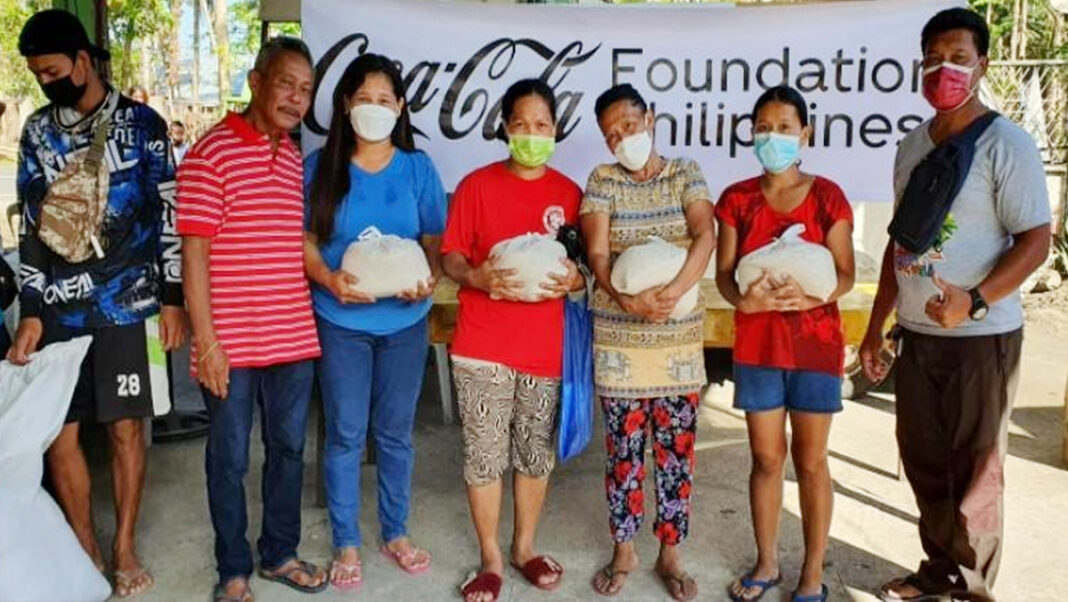 RESPONDING to the call for aid following the devastation caused by Super Typhoon Odette in the Philippines in December 2021, The Coca-Cola Foundation, the global philanthropic arm of The Coca-Cola Company, has extended relief assistance to thousands of Filipinos across six provinces of the country.

The Coca-Cola Foundation has awarded a grant of US$400,000 to CBCP Caritas Filipinas Foundation to support the disaster relief efforts of nine dioceses in the Visayas and Mindanao. The grant will provide food, shelter repair kits, solar lamps, and hygiene kits to 4,031 families affected by the typhoon in Bohol, Leyte, Negros Occidental, Negros Oriental, Palawan, and Surigao del Norte.

Cecile Alcantara, President of Coca-Cola Foundation Philippines, adds: “Coca-Cola Foundation Philippines and its trusted partners will continue to serve Filipinos not only through our programs on waste management, water stewardship, education, and youth and women empowerment but also through our long-held commitment to disaster relief. The resilience of a Filipino is always strengthened when we come together—and we are here to give our unrelenting support, one day at a time.”

Coca-Cola Philippines’ initiative in the past month has amounted to a total of more than P10.8 million worth of disaster relief funds for typhoon victims, including employees in the Visayas and Mindanao.

“Circumstances such as typhoons and the pandemic continue to affect Filipinos across the archipelago, and this is why it is critical for us at Coca-Cola Philippines that we provide continuous support to communities whenever we can,” shares Tony del Rosario, President of Coca-Cola Philippines and VP for Franchise Operations of the ASEAN and South Pacific-East Asia Region. “By extending humanitarian aid, we continue to prioritize the immediate needs and well-being of those affected the most.”

In the aftermath of the typhoon, Coca-Cola Beverages Philippines Inc. (CCBPI)—the company’s bottling arm in the country—also mobilized its resources to distribute nearly 70,000 liters[RD1]  of Wilkins drinking water for residents in affected provinces and cities. Moreover, CCBPI made sure that affected employees were given assistance through a P5-million emergency fund, while also providing them with over 70,000 liters of drinking water and around P800,000 worth of grocery items.[RD2] [MA3]

Staying true to their People First commitment, CCBPI’s employees from other parts of the country launched an internal donation drive and were able to collect more than P600,000 to help their fellow associates in the Visayas and Mindanao whose homes were destroyed by the typhoon.[RD4]

On top of this, CCBPI is working with the local government of Mandaue City in Cebu toward the deployment of a SETA machine (a mobile water treatment equipment that processes water to make it potable) in evacuation sites and communities in Marawi, Davao del Sur, and Bicol.[RD5]

“Our commitment has always been uplifting the well-being not only of our consumers but the employees behind the work we do,” said Gareth McGeown, President and CEO of CCBPI. “It is truly heartwarming to see CCBPI’s employees come together despite the limitations and challenges posed by the typhoon. Their dedication to helping those in need is a testament to our People First commitment–that through our collective effort, we are able to uplift one another even in times of crisis.”|