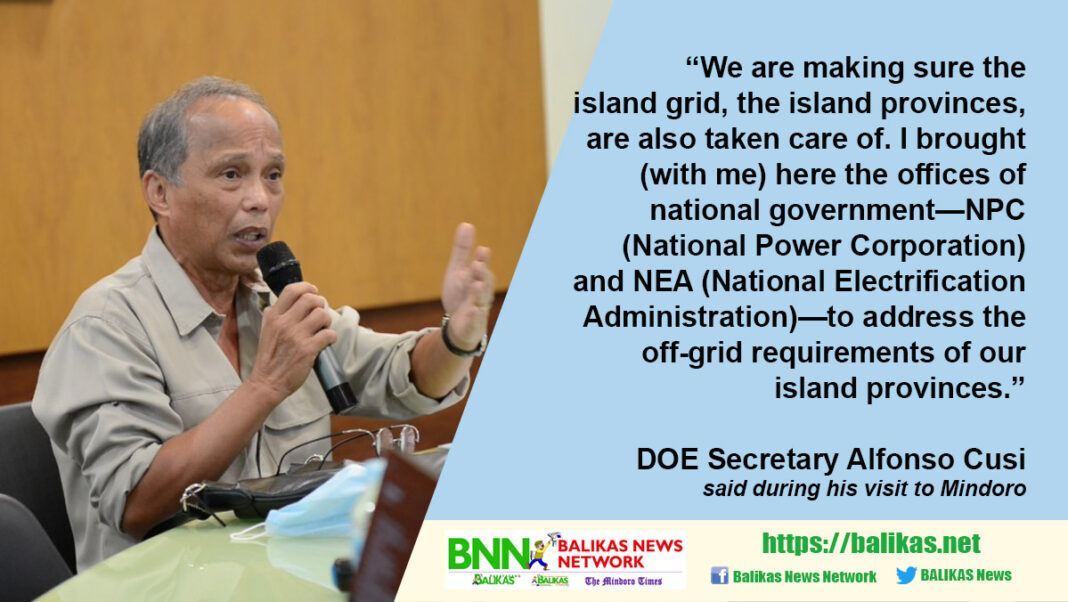 CITY OF CALAPAN, Or. Mindoro — ENERGY Secretary Alfonso Cusi reiterated his assurance of sufficient power supply in the country as he traveled to Mindoro island to personally resolve the rotating brownouts plaguing the island provinces. Sec. Cusi brought with him the key officials of the National Power Corporation (NPC), National Electrification Administration (NEA) and National Transmission Corporation (TRANSCO) in Mindoro to address the power problems in the entire province being served by the electric cooperatives, Oriental Mindoro Electric Cooperative (ORMECO), Occidental Mindoro Electric Cooperative (OMECO) and Lubang Electric Cooperative (LUBECO).

“We can refer to the PEP (Philippine Energy Plan) and included in that is the demand and supply outlook, where we are not only looking at election time. What we stated there is there is enough power (during the May 2022 elections),” Cusi said in a virtual press briefing.

Last week, Energy Undersecretary Felix William Fuentebella also said that based on the DOE outlook, there is “sufficiency of supply, with no yellow alerts, and no power interruptions” during the May 2022 polls, considering the initial base case scenario.

As far as the island of Mindoro is concerned, Cusi said he is expecting to address the power shortage problems within a month.

“We are making sure the island grid, the island provinces, are also taken care of. I brought (with me) here the offices of national government—NPC (National Power Corporation) and NEA (National Electrification Administration)—to address the off-grid requirements of our island provinces,” Cusi announced.

In the case of Occidental Mindoro, served by OMECO, Cusi said the DOE has addressed the province’s power supply with an additional 4MW capacity that eased its supply concerns.

At present, the DOE is looking into the possibility of looping the power systems of ORMECO and OMECO “so the entire island will have a solution” to its power supply woes.

The Energy chief also bared that he has given the NPC a deadline to solve the 25MW power supply shortage of ORMECO.

He explained that the NPC would help provide additional power supply to the province even as ORMECO is conducting its own process of contracting with the help of NEA.

Cusi said the Mindoro visit is part of the DOE’s efforts to make sure the department can achieve its goal to provide 100 percent electrification by 2022.

“We are ensuring that household electrification is expedited. That’s why we are visiting provinces in off-grid areas. We are making sure the commitment of this administration is met when our term ends in June (2022),” he stressed.

Specifically, Sec. Cusi tasked NPC to provide the shortfall in supply by September 20 and for ORMECO to rush the procurement of supply shortage in accordance with Competitive Selection Process policy within 6 months. TRANSCO was also assigned to be the System Operator which will enhance the transparency in the delivery of electricity services to the island.

Meanwhile, the DOE also reassured the public of adequate power supply despite the scheduled preventive maintenance of the gas field from October 2 to 22 this year.

“As far as the months of September, October–even up to February (next year)–we have sufficient power, we have more than enough reserves,” said Fuentebella, who took over the briefing as Cusi has to attend to another meeting.

Among others, the DOE is looking at additional power from the 668MW GNPower Dinginin expected to go online in the third quarter of this year.

Likewise, he noted that two liquefied natural gas (LNG) facilities are expected to start operations by next year.|-BNN/doepr