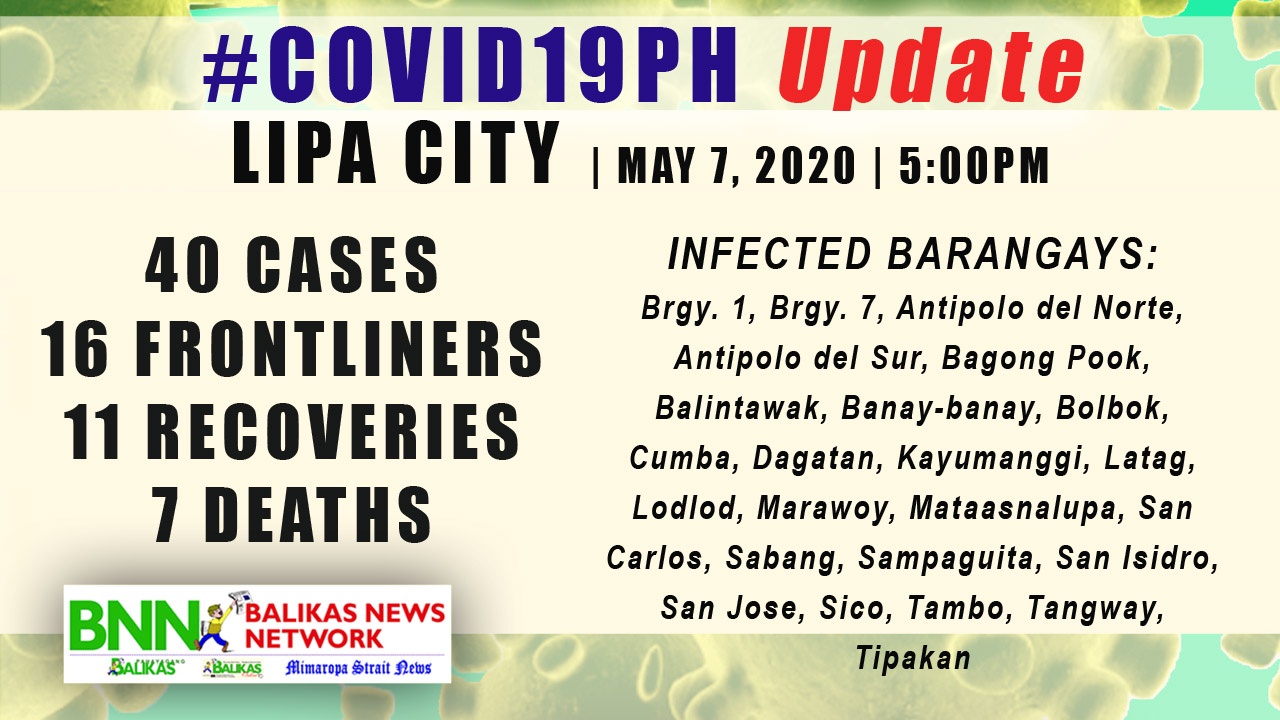 OF the total 116 confirmed positive corona virus disease (CoVid-19) in the province of Batangas, Lipa City accounted for 34.48% of it corresponding to 40 cases as of Thursday, May 7, the report of Center for Health Development – Calabarzon, Batangas Provincial Office revealed.

Of the said numbers of Lipa’s confirmed cases, only 11 patients have fully recovered from the pandemic, while the city has recorded seven (7) deaths.

Based on the daily Covid-19 Update of Mayor Eric B. Africa posted regularly in his social media page, it was found out that 16 of the accounted covid-19 patients are frontliners, either medical or health personnel in hospitals in different capacities, while three (3) of them are uniformed personnel. These frontliners were among those included in the targeted mass testing for uniformed personnel conducted last May 1 and their results were made public on May 6.

It was also noted that Lipa City also accounted for the two (2) youngest Covid-19 positive cases – Lipa City Case 15 is a 29-day old baby boy from Barangay Lodlod whose swab test results was only confirmed after his death. Days after, the boy’s grieving mother was also reported to have also contacted the corona virus. The other child victim is a 10-day old baby girl of barangay Tipakan, the youngest CoVid-19 patient recorded in the province of Batangas.

While there are few cases being traced to have contacted in the National Capital Region, most of the cases are locally transmitted; the bulk of which is a group of eight (8) health workers of a health facility which were exposed to two (2) dialysis patients who turn out to be both positive of the corona virus.

The cases in Barangay Cumba were believed to be traced from band singer Joey Bautista who visited his parents in early March. After the singer’s demise in Manila on March 19, his parents were both infected and were confirmed a week after. Another household member, an elderly woman attending to the needs of the elderly Bautista couple was also infected with the virus. The singer’s father later on recovered following the recovery of the household helper, but his mother failed to recover.

With the spiraling cases in the city, majority of the Lipeños are calling for the authorities to put the entire city under hard lockdown to prevent the further spread of the pandemic.| – BALIKAS News Network