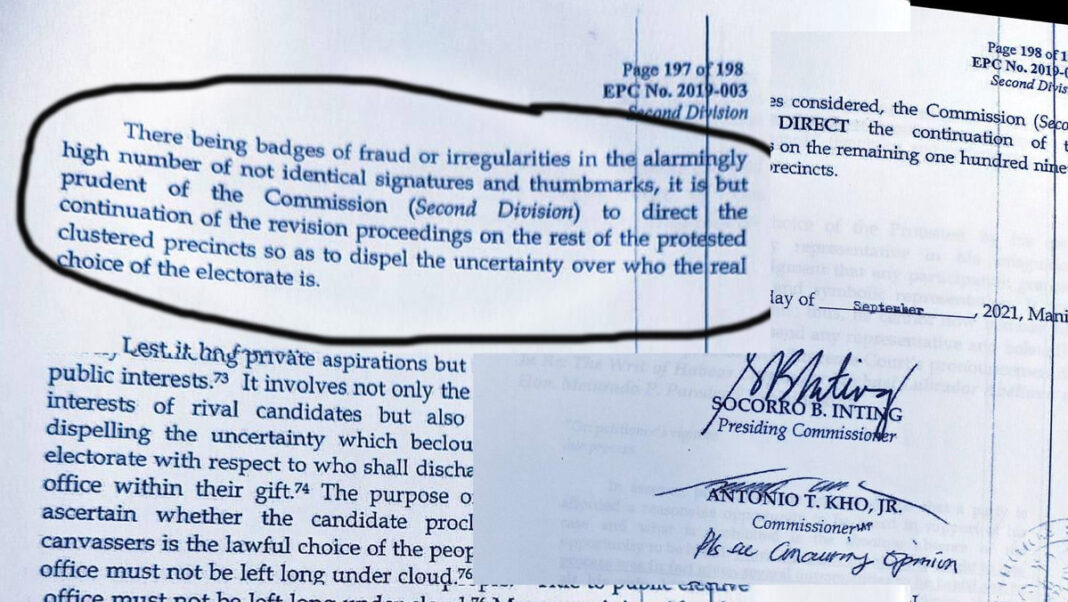 Lipa City – The 2-year old electoral protest in Batangas take a new toll after the Commission on Elections (Comelec) unearthed a massive fraud in the mayoralty race that could change the political landscape before the next local elections.

In an 11-page motion submitted to the Comelec on Thursday, September 24, mayoralty candidate/protestant Bernadette P. Sabili moved to withdraw the petition for revision of ballots and technical examinations of election rated documents of the 196 clustered precincts out of the total 245 clustered precincts in the City of Lipa.

This, after the Commission found out that after examining the 49 pilot precincts or the first 20% of the total number of precincts, the examiners have discovered that there was a massive fraud in the recent election as there is a total of 15,728 registered voters whose votes were fraudulently casted.

Further, the examiners found out that the signatures and thumbprints of some 15,728 registered voters in the Election Day Computerized Voters Lists (EDCVL) for the 2019 elections were not identical with those in the Voters Registration Record (VRRs). Only a sum of 16,920 registered voters in the said 49 pilot precincts have identical signatures and thumbprints in both the EDCVL and VRR.

Surprisingly, in the 23 pilot protested precincts, more than 50% of the votes casts thereat were found to be spurious and illegal upon seeing the signatures and thumbprints in both EDCVL and VRR in the barangays of Marauoy, Poblacion Barangays 1, 2 and 7, bagong Pook, Banay-banay, Bolbok, Lodlod, Muntingpulo, Pinagkawitan, Plaridel, Sabang, Sampaguita, San Carlos, San Celestino, San Lucas, and Tambo.

In the recent election, many of there were reported instances of malfunctioning of vote counting machines (VCMs) and misreading of SD Cards in these barangays.

In the 198-page Order penned by Presiding Commissioner Socorro Inting, the poll body’s Second Division revealed that the substantial number of signatures and thumb marks found in the EDCVL to be not identical with the number of registered voters appearing in the VRR is so higher than the ,598-vote lead by Africa over Sabili.

In his concurring opinion, Comelec Commissioner Antonio Kho Jr. took note of this disturbing discovery of fraud that the number of the ballots bearing not identical signature and thumbprints is substantially higher than the said voted lead by the Protestee over the Protestant.

Meanwhile, should the votes garnered by both Africa and Sabili in the pilot protested precincts be deducted from the total number of votes they both garnered in the 2019 elections, Sabili will emerged as winner with the 131 votes lead over Africa.

With the discovery of the massive fraud in the first 49 clustered precincts, Sabili camp has now moved to withdraw the petition to revise and examine the remaining 196 precincts, and after the completion of the proceedings, prayed that the Commission declare the protestant as the true and legitimate winner in the 2019 mayoralty election in the City of Lipa.| – BNN