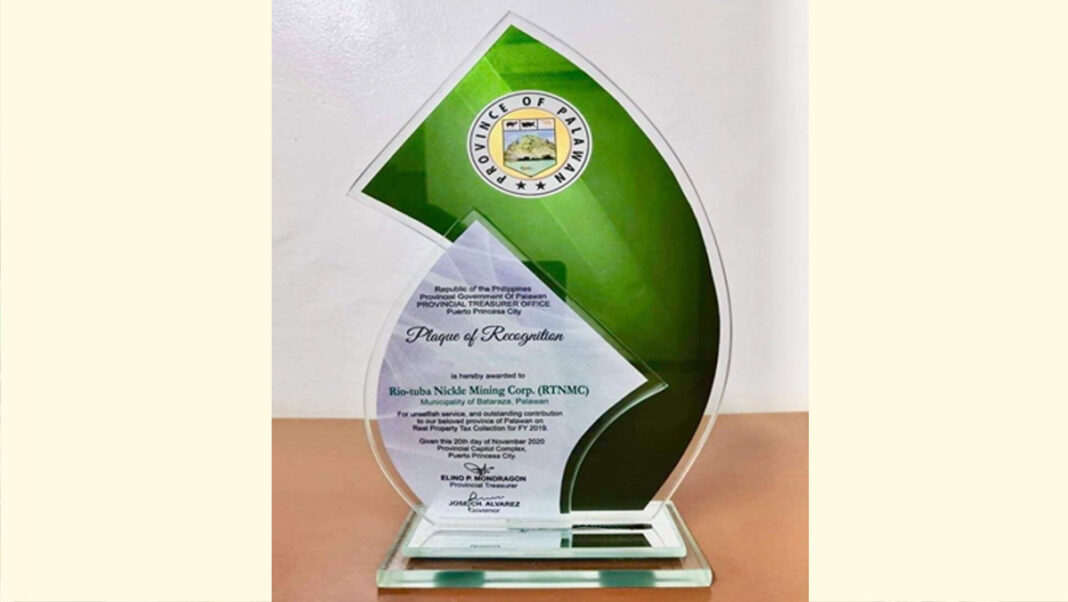 Rio Tuba Nickel Mining Corp., (RTNMC), a subsidiary of Nickel Asia Corp. (NAC), is hailed as one of the largest corporate taxpayers in Palawan.

The mining company’s real property taxes alone, not counting income and excise taxes and other local taxes paid to the local and national government, is instrumental in realizing high-impact development programs that boost the economic health of the province.

RTNMC has paid the provincial coffers P340 Million in real property tax from 2016 until 2020.

“RTNMC’s taxes is a big boost to our economic health.  About 85 percent of our gross income is from the contribution of the two mining companies, RTNMC and Coral Bay Nickel Corp. (CBNC), that we host,” says Ibba.

In 2018, RTNMC was again lauded as the number one taxpayer in Palawan with a total real property tax payment of P10. 3 Million.

Additionally, RTNMC’s payments of mayor’s permits and licenses have reached around P34 Million as of 2019.

RTNMC is instrumental in creating the Rio Tuba Export Processing Zone through Presidential Proclamation No. 304 in 2002 that facilitate the establishment and hosting of other businesses which bring jobs to the communities.

The contribution of RTNMC has been consistently recognized every year by the Provincial Government of Palawan as municipal treasurers are also honored for diligently performing tax collection in their respective locality.

The mining company plays a significant role in providing jobs and basic services to its surrounding communities and creating a venue for an active economic hub with good support infrastructure.

As among the largest corporate taxpayers in Palawan since 2014, RTNMC was acknowledged as the 28th Largest Corporate Taxpayer in the Philippines in 2015.  And in 2016, contributed nearly P800 Million in tax revenues and P41.3 Million in royalties, a feat achieved by very few other Palawan-based business operations.

Palawan’s mineralized lands, particularly in the southern part of the island province, has kept the economy afloat, especially during the pandemic.| – BNN