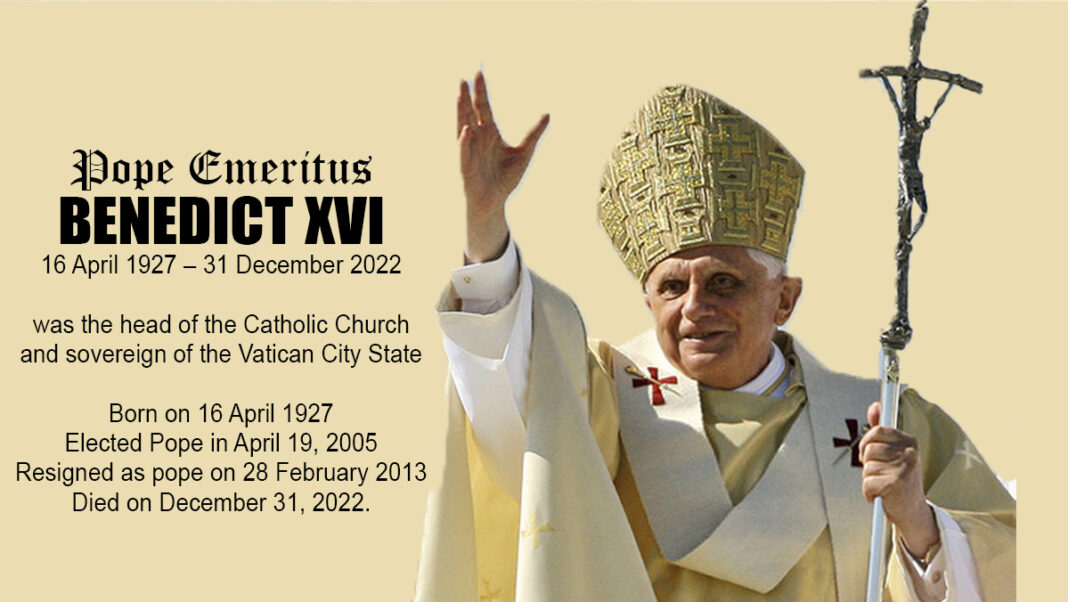 JUST before the Roman Catholic Church celebrates the Solemnity of the Motherhood of Mary, the world’s biggest religion lost its Holy German shepherd, Pope Emeritus Benedict XVI, at the Mater Ecclesiae Monastery, Vatican City, at exactly 9:34 in the morning, December 31.

The late pontiff, the reverred theologian Joseph Aloisius Cardinal Ratzinger of German origin prior to his election as the Supreme Pontiff succeeding the late Karol Wojtyla (now, St. Pope John Paul II), is the first pope to resign in 600 years.

The retired pope passed away on Saturday at the age of 95, three days after Pope Francis asked for prayers for his predecessor who was “very sick”.

The country’s Catholic bishops asked for prayers for the repose of the soul of Pope Emeritus Benedict XVI.

“Let us commend him to the Lord and pray for his eternal repose,” said Bishop Pablo Virgilio David, president of the Catholic Bishops’ Conference of the Philippines (CBCP).

The CBCP paid tribute to the former pontiff, saying they will fondly remember him, especially by those he appointed to the episcopal ministry.

According to him, Benedict XVI began his papacy with a profoundly theological encyclical entitled, Deus Caritas Est (God is Love).

“Among the many charisms God had bestowed on him, he will be specially remembered as a great theologian, catechist, and musician,” David said.

“He spent the last years of his life as an emeritus pope in solitude and contemplation, supporting the universal Church and Pope Francis spiritually with his prayers,” the bishop added.

Benedict XVI succeeded Pope John Paul II and served as head of the Catholic Church from April 19, 2005 to February 28, 2013.

In his papacy of nearly eight years, he appointed eight archbishops and 22 bishops in the country including David, who was then auxiliary bishop of the San Fernando archdiocese.
His first bishop appointee in the country was Archdiocese of Caceres’ then Auxiliary Bishop Jose Rojas in July 2005, and who was later named bishop of Libmanan in 2008.

Archbishop Emeritus Antonio Ledesma of Cagayan de Oro, meanwhile, was the first Filipino archbishop to be appointed by the German pope.

His last appointee was then Nueva Segovia Auxiliary Bishop William Antonio in June 2011. Antonio has now been serving the Diocese of Ilagan since 2019.

Benedict XVI spent his final years at the Mater Ecclesiae monastery within the walls of the Vatican.| – BNN with reports from CBCPnews.net