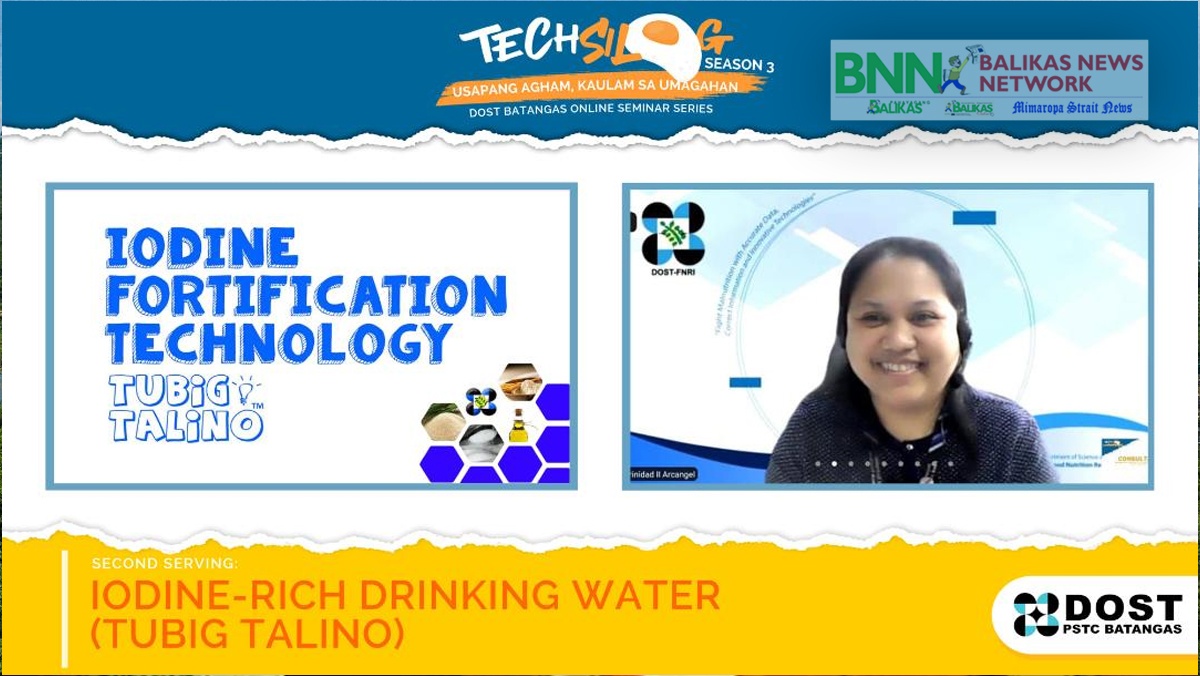 Tubig Talino is a response to the call of slaying Iodine Deficiency Disorders (IDD) among Filipinos. It is a purified or ordinary potable water mixed with Water Plus I2 that may be consumed to improve iodine intake of Filipinos resulting to better health. According to FNRI, a 5ml of Water Plus I2 can make 20 liters of Tubig Talino that can meet 33% of the iodine daily requirement of the body.

A total of 110 participants composed of micro, small, and medium enterprises (MSMEs), educators, students, researchers, government officers, and private organizations partook the episode. The discussion was led by Ms. Trinidad II T. Arcangel, Senior Science Research Specialist at FNRI, and has been anchored to the functions of Tubig Talino as a refreshing iodine rich drinking water.

In her discussion, Ms. Arcangel shared that just like the ordinary water, Tubig Talino has no adverse taste and has stable shelf life for 6 months and 2 weeks. As she steers the discussion, she mentioned that studies show that sufficient consumption of iodine from water helps the absorption of essential micronutrients which speed up brain development among children and prevent iodine deficiency orders in adults.

The processing of Tubig Talino was covered in the succeeding parts of Ms. Arcangel’s discussion. She explained how the process happens starting from the making of the iodine premix to ensure proper mixing of the potassium iodate powder with the water. The moment this premix is added to a purified water, the water becomes Iodine-fortified or simply ‘Tubig Talino’. Hence, as to Ms. Arcangel, effectiveness of this Tubig Talino is always validated through an efficacy study.

A good example she provided was the efficacy study of Tubig Talino in 2003 where a total of 437 Grade 3-5 students from 3 elementary schools in Alfonso, Cavite were provided with this drinking water. After a year of the studying, a decreased in proportion of school children with deficient iodine excretion from 86.3% to 25.2% was recorded. The cost of fortification and some of the frequently asked questions (FAQs) about the Tubig Talino technology were likewise integrated in the discussion. First FAQ is the cost of Capital Investment for Tubig Talino which roughly estimates to Php700,000.00 if the adaptor has no water purification facility.

However, if the interested adoptors already have an existing facility, investment is at the range of  Php 150,000.00 – Php 200,000.00 only. Second FAQ is about the space requirement for Tubig Talino facility which is at 4x3m² minimum. Final FAQ pertains to the materials and equipment needed in setting up the Tubig Talino Facility.

Meanwhile, questions and concerns of the participants were addressed during the “Consultalk” segment. Two Tubig Talino adoptors in Batangas province, Bago (Ibaan) Multipurpose Cooperative (BIMPC) and San Pedro Multipurpose Cooperative (SPMPC), were also given the chance to share their experiences and progress as they champion their enterprise. Ms. Riza A. Pana, General Manager of BIMPC and Ms. Victoria Maligaya, Project Manager of SPMPC, expressed their appreciation on Tubig Talino’s contribution to their growth as a community enterprise. Thay have likewise shared about the markets they have penetrated particularly the schools where they distribute their produced Tubig Talino.

On the other hand, Ms. Felina C. Malabanan, PSTC Batangas Provincial Director, expressed her gratitude to all the participants and stressed the importance of this FNRI-developed technology in combatting IDD in the country. Hence, she encouraged interested participants to also adopt this technology and venture into this kind of enterprise.| – BNN / With Renalee M. Leyesa, DOST-PSTC Batangas