THE Aristocrat Restaurant, also known as “Home of the BEST Chicken Barbecue in Town”, celebrating generations of Filipino tradition for the past 82 years, is officially open in Lipa, Batangas.

Established in 1936, founded by the late Doña Engracia “Aling Asiang” Cruz-Reyes and her husband, Justice Alex A. Reyes, the Aristocrat has grown into a restaurant serving the same signature flavors and quality home-cooked Filipino dishes by Lola Asiang used 82 years ago to serve her very own children. 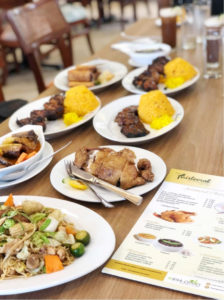 Welcoming all Batangueños, the opening celebration on October 25, 2018 at The Aristocrat Restaurant Lipa, Batangas branch began with a motorcade along the main streets of Lipa, followed by a Mass by Rev. Msgr. Ruben M. Dimaculangan and cutting of ribbon by Lipa City Mayor, Hon. Meynardo A. Sabili, and Priscila Reyes Pacheco, President of The Aristocrat Restaurant.

Nailaholics Things get a little too much this past holiday season? SM just got a place for you to go to and relax as Nailaholics opened its branch at SM City Batangas. It is a perfect place for nail and pampering services that allow you to feel like you’re taking a vacation.Nailaholics is located at […]

IN line with its goal to have a better, braver and bolder 2021, hardware and improvement store chain Handyman Do-it Best recently opened its 177th  store at LIMA Exchange, inside the LIMA Estate in Lipa-Malvar, Batangas.  As one of the most trusted brands in the country, Handyman offers a wide range of hardware and home […]

What keeps Marian in love everyday?

AS a hands-on Mom, Marian Rivera-Dantes wants the best for her family, especially her two kids Zia and Ziggy. Like all Moms, she found herself challenged by uncertainties of the pandemic. That’s why it was important for her to be able to shop at a place that is easy to access considering the limited movements […]

IMUS, Cavite — THE people of historic province of Cavite is grieving for the loss of its former governor and lawmaker, Ireneo “Ayong” Maliksi. In his message, Thursday, incumbent Governor Junvic Remula officialy announced the passing of the former governor and expressed his grief and sympathy as a father of the province. “On behalf of […]