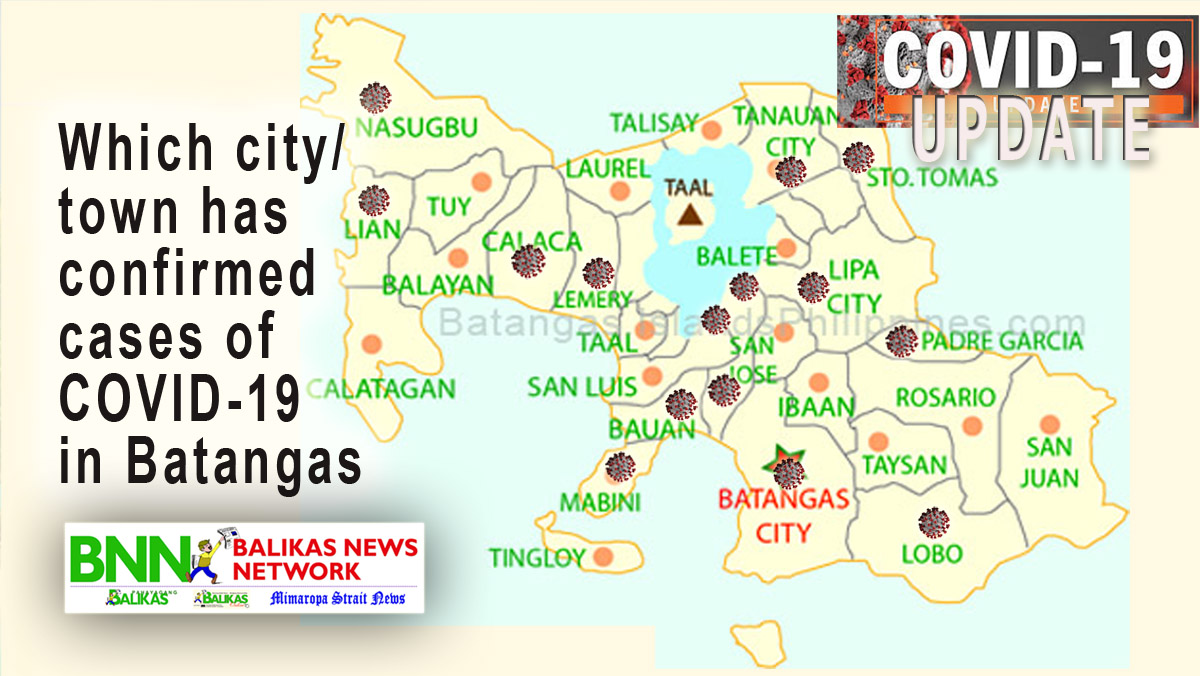 ANOTHER five (5) new cases of confirmed coronavirus positive patients were recorded in Batangas, the the Center for Health Develepment (CHD) Calabazron – Provincial DOH Office in Batangas reported as of 4:00 p.m., Monday, April 6.

In the said new cases, two (2) are in Lipa City, while the other three (3) are from Batangas City, Tanauan City and Bauan town with one (1) new confirmed cases within 24 hours. The data released at 4:00pm yesterday listed five (5) cases for verification as to which city or municipality they belong. As of 8:00 o’clock this morning, CHD-Calabarzon – Batangas Field Office identified them as follows: three (3) from Lipa City, and one (1) each from Batangas City and Tanauan City.

Comparing further with the said data released by CHD-Calabarzon – Batangas Field Office on Sunday, it is noted that Lipa City now accounted for the most number of cases with 14 confirmed positive cases. Batangas City has 12 cases, Nasugbu has 9, while Tanauan City has 6.

Bauan tosses with Alitagtag and Cuenca with two cases each; as Lemery, Calaca, Lian, Lobo, Mabini, Padre Garcia and San Pascual remains with a single case each.

Still, the first case in the province, Batangas City’s patient 1 [PH49, BC-1] is the only recorded fully-recovered patient among the 55 Batangueños who were tested positive for corona virus disease.

Remarkably, the recorded cases of Lemery and Lobo are now on recovery status and are both completing their home quarantine to fully recover from the highly contagious disease.

Among those who recovered, Nasugbu’s 2nd patient, Ariane Tee Khey who is now also on home quarantine is most celebrated among the recorded recoveries in the province. Khey has shared publicly her ‘journey’ of battling with COVID-19 and pleads for public understanding and the public’s submission to government policies under the ECQ.

Last Tuesday, the Municipality of Lian reported that the lone covid-19 patient in Lian has been discharged from the hospital after two negative results and is under home quarantine in Batangas City. He is just awaiting the result of the final test to be declared as fully recovered.

“Sending our take-home love and care to our patient. Likewise, sending our thanks and sincere congratulations to our DMMC medical team and support staff. To God be the glory!”, the hospital’s advisory read.

Another patient [TC-2], has also recorded negative result and is declared recovered.

As of April 4, the lone case in Sto. Tomas (PH1496) although still admitted in a health facility has recorded a negative result already. One more negative result is needed before he can be discharged from the hospital and be declared COVID0-19 free.

There are two other Batangueños who have been reported as Covid-19 positive but were recorded in Metro Manila as they currently resides outside of the province, but has also triumphantly recovered from this pandemic.

Per record of the CHD-Calabarzon – Batangas Field Office, Batangas has the same number of recoveries with those who died of the COVID-19 pandemic.| – BALIKAS News Network