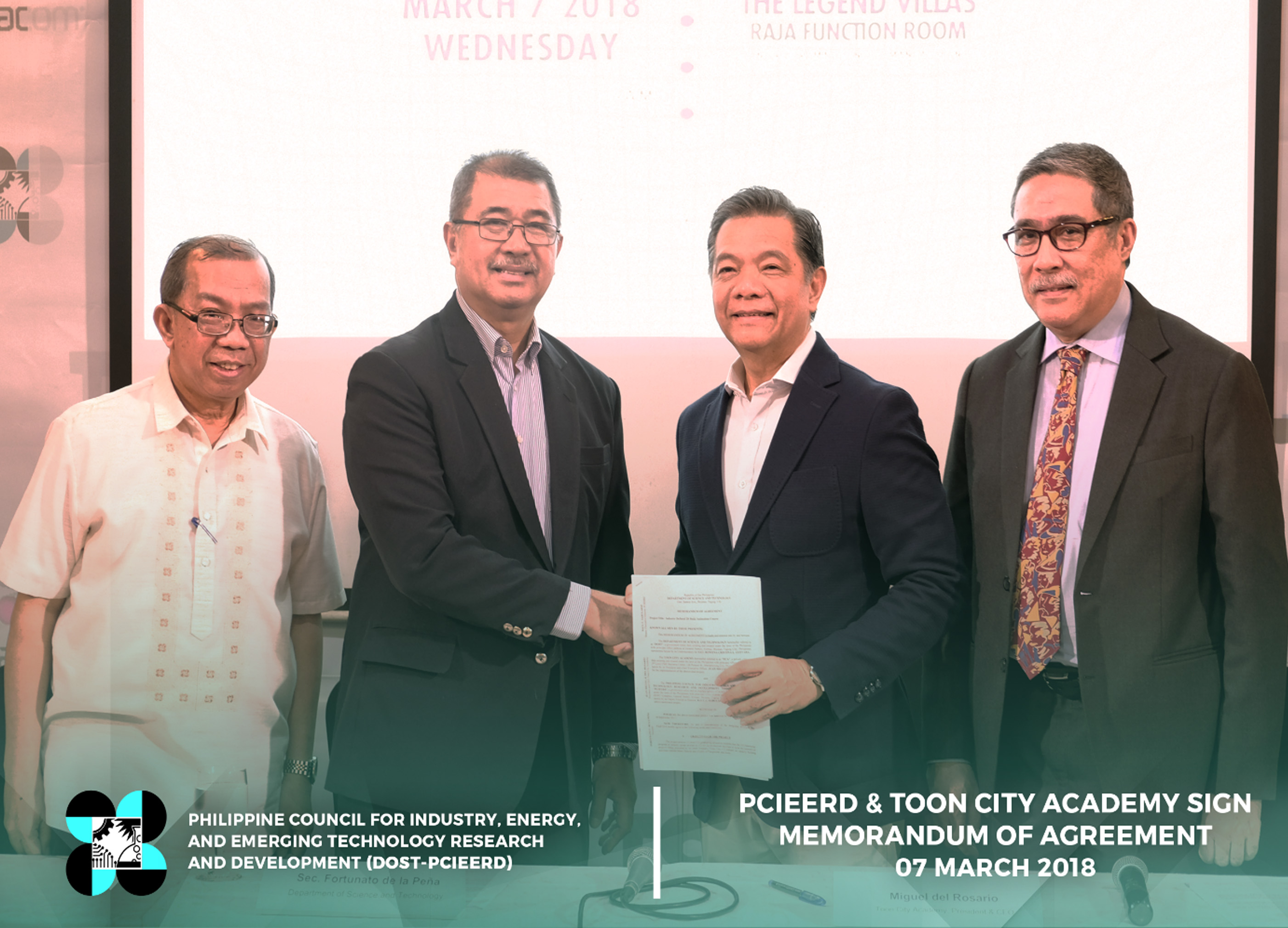 THE Department of Science and Technology (DOST), through the Philippine Council for Industry, Energy, and Emerging Technology Research and Development (PCIEERD), partners with Toon City Academy through a memorandum of agreement signed on March 7, 2018 to capacitate and hone more Filipino animators, ushering the growth of our creative industries.

The memorandum of agreement is a response to PCIEERD’s recent inclusion of Creative Industries to its sectoral coverage with the initiative to spur an increase in people capacity and employment opportunities through proper cultivation of talents and adequate trainings. “I believe that it is high-time that we fully use our resources to boost our creative industries, as it is one of the driving forces of our economy and its continuing growth,” said DOST Secretary Fortunato T. dela Peňa.

The pilot project was designed to stregnthen animation since it is now a known emerging market in the business process outsourcing sector. According to the Animation Council of the Philippines, Inc. (ACPI), currently, the country has 6,000 local animators. However, not every animator is equipped with skills that are noticed in the global market, making the Philippine animation industry remain in its infancy.

With this, Toon City Academy, the only Emmy-award winning studio here in the Philippines, is a perfect fit for this initiative. This birthed the project titled “Industry-defined 2D Basic Animation Course,” comprising of a 12-week intensive basic animation workshop, and actual work production through an internship program.

Mr. Roderico De Guzman, Toon City Academy’s VP for Resource Development, said that he is thankful for this collaboration as it has provided the necessary tools to 120 animators-in-training to improve their livelihood. These animators are from Pangasinan and Iloilo City. The 12-week animation course ensures that they acquire industry-standard skills. “We are currently addressing capacity building outside Metro Manila and with the help of everyone here, we are creating employment for people who will not necessarily have this chance in their areas,” De Guzman added.

“You are probably aware of the recent Oscar Awards, the theme song of ‘Coco’ was written by a Filipino couple; and that animated feature film, while its characters are Mexican, the lead story writer is Filipino—Gigi Santos. I can run by many names. Ronnie del Carmen co-directed ‘Inside and Out.’ Paul Abadilla, a set designer in ‘Finding Nemo’ and ‘Finding Dory,’ was the animator behind the bahay kubo in the first film. Now, our animation studio is working on two titles for Disney, and two blockbuster titles from French studios.

All that to say that the talent for world-class animation is here.” With this, Toon City Academy’s President and CEO Mr. Juan Miguel Del Rosario guarantees the success of this initiative, believing that Filipinos have what it takes to flourish in the global spotlight.|DOST-PCIEERD S&T Media Service / #BALIKAS_News