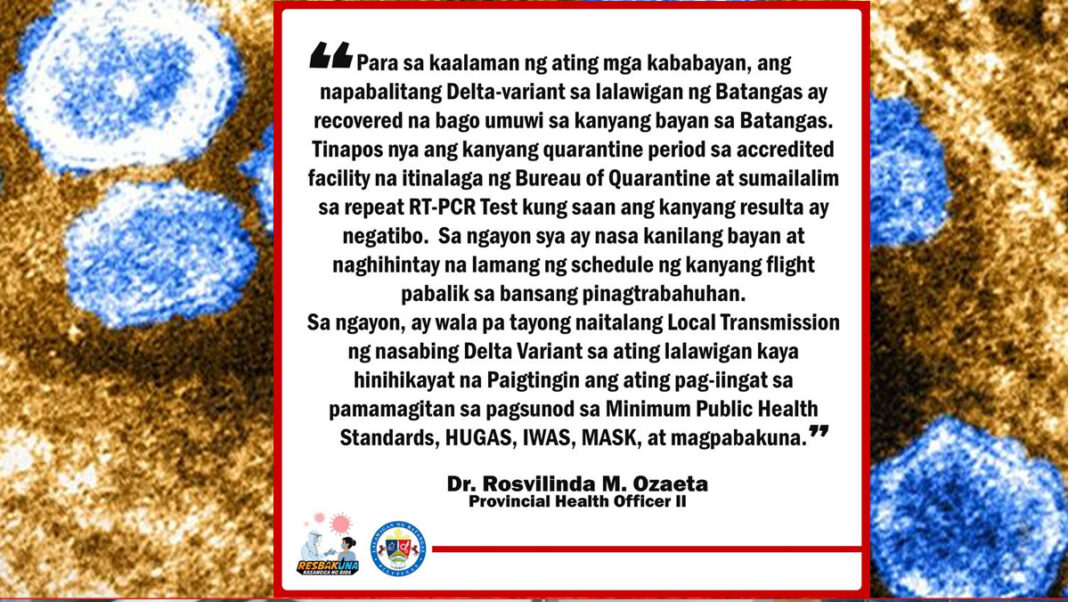 BATANGAS City – There is no active case of the highly contagious Delta variant of the deadly corona virus disease in the province of Batangas, the Provincial Health Office (PHO) and the Provincial Inter-Agency Task Force on Emerging Infectious Diseases (PIATF-EID) clarified Monday, July 26.

Meanwhile, Dr. Arlina B. Magboo, chairperson of the Sangguniang Panlalawigan Committee on Health clarified that there is no so much reason to be scared of the said case as the recovered overseas Filipino worker has not transmitted the variant to any of his direct contact when he went home last month of May.

After his negative result in the repeat RT-PCR Test following his quarantine period in a facility in Nasugbu town, he once again observed another quarantine period at home and only after a couple of months that the Philippine Genome Center confirmed that his infection was a case of Delta variant.

“The recovered patient should have already left the country on this last week of July, but his departure was rescheduled on the first week of August 2021,” Magboo said.

Dr. Ozaeta, however, assured the public that there was no local transmission yet of the variant in the province, reason why the provincial government is continuously appealing for strict adherence to minimum public health standards of handwashing, physical distancing and wearing of mask, and be vaccinated.| – BNN